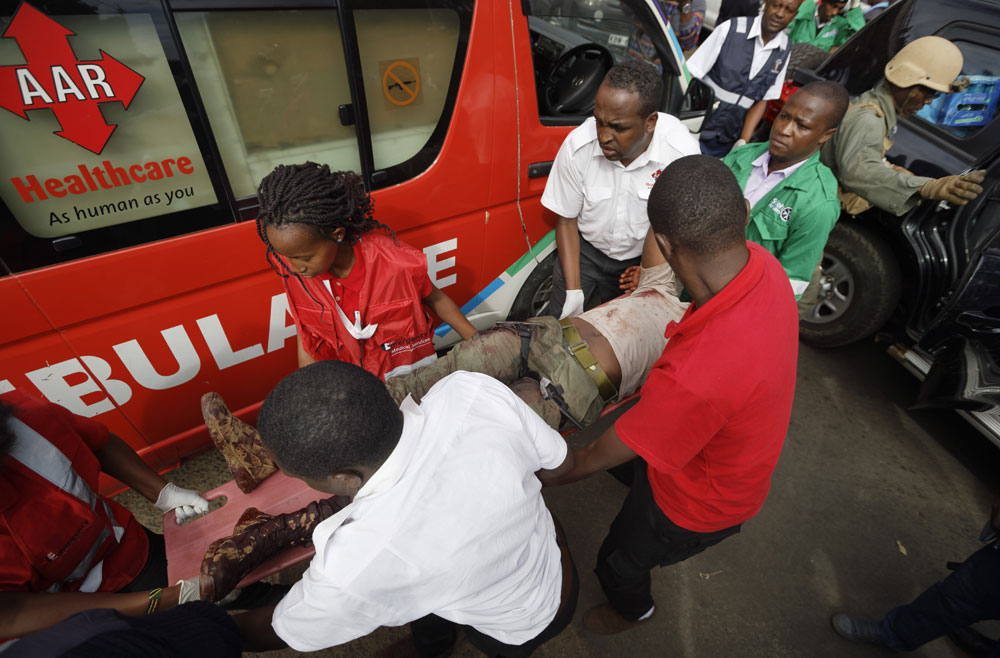 A wounded member of Kenyan special forces with two tourniquets around his legs is carried from a US embassy diplomatic vehicle into an ambulance by paramedics at the scene Wednesday, Jan. 16, 2019 in Nairobi, Kenya. Extremists stormed a luxury hotel in Kenya's capital on Tuesday, setting off thunderous explosions and gunning down people at cafe tables in an attack claimed by Africa's deadliest Islamic militant group. (Photo: AP)

NAIROBI, Jan. 16 (Xinhua) -- The number of people killed when terrorists struck an upscale hotel and business complex in Nairobi on Tuesday has risen to 21 after six more bodies were recovered and one injured police officer died in hospital, the police said on Wednesday night.

Joseph Boinnet, inspector general of National Police Service, said at a press conference that a police officer who was involved in the rescue operations succumbed to injuries in hospital while six more bodies were recovered from the scene following forensic work by security officers.

He said 28 people were admitted in various hospitals in Nairobi and confirmed that five terrorists were "eliminated."

The police chief said the 21 victims killed during the attack include 16 Kenyans, one Briton, one American and three unidentified persons of African descent.

He said subsequent investigations by the Directorate of Criminal Investigation have resulted in the arrest of two key suspects believed to have facilitated the attack and are in custody helping the security officers with investigations.

"We wish to reiterate our appeal to all Kenyans to continue cooperating with the police and security agents in their joint efforts to counter terrorism as well as all forms of crime," Boinnet said.

His remarks came after Kenyan President Uhuru Kenyatta revealed in an address to the nation on Wednesday morning that 14 civilians had been killed and hundreds rescued in the attack at DusitD2 Hotel complex located on 14 Riverside Drive in the district of Westlands in Nairobi.

The Kenya Red Cross said on its Twitter account on Wednesday evening that 19 people are still unaccounted for following the terror attack.

The organization said that a total of 94 cases of missing persons were reported but 75 have been closed positively as of 8:30 p.m. local time.

Somali terror group al-Shabab claimed responsibility for the attack, saying they killed 47 people inside DusitD2 Hotel, part of a Thai-owned international chain that appeared to be the chief target of the attackers.

The militants issued a statement online on Wednesday evening, saying the Nairobi attack was a response to the "witless remarks" of US President Donald Trump and his declaration of Jerusalem as the capital of Israel, and to the "systematic prosecution of Muslims in Palestine." Kenya is one of the strongest allies of the United States in Africa.