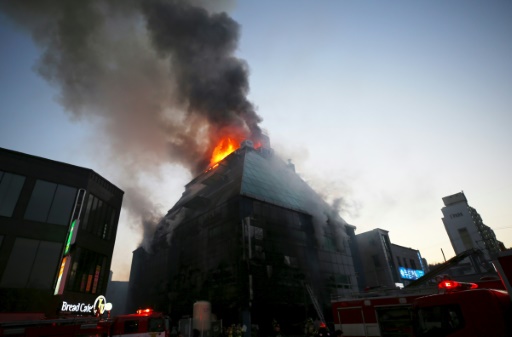 A blaze in a sports centre in South Korea. (Photo: AFP)

The number of death toll rose to 29 in a South Korean building fire accident Thursday in the country's southeastern city, according to local media reports.

The fire broke out in an eight-story fitness center building in Jecheon city, North Chungcheong province, about 170 km southeast of capital Seoul.

The victims were found dead as they were trapped in a public sauna in the second and third floors of the building.

The number of those injured increased to 26 who were taken to nearby hospitals after inhaling smoke.

The fire started at about 3:53 p.m. local time (0653 GMT) from a parking lot at the first floor, engulfing the entire building.

Some 50 fire engines, 60 firefighters and two choppers were sent to the scene to put out fire and rescue people.

The fire was extinguished at about 5:40 p.m. local time. Firefighters started search operation inside the building.

More casualties could be found inside the building housing fitness center, public sauna and restaurant.