MOSCOW, Jan. 3 (Xinhua) -- The number of people killed in a residential gas explosion in Russia has increased to 38, the country's Emergency Ministry said Wednesday. 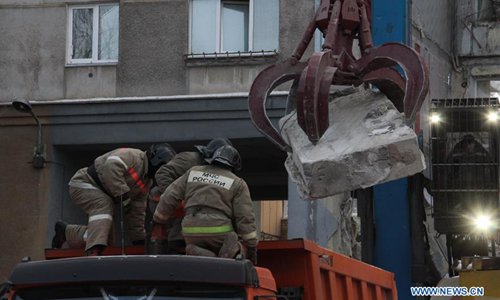 Russian Emergency Situations Ministry personel work at the explosion-rocked residential building in the city of Magnitogorsk, Russia, Jan. 2, 2019. A household gas explosion hit a 10-story residential building in the Russian city of Magnitogorsk on Dec. 31, 2018. The death toll of the explosion had increased to 37, the ministry said on Thursday. (Photo: Xinhua)

Rescuers found the body of a woman, the 38th victim, under the debris of the collapsed building, TASS news agency cited the ministry's spokesman as saying.

The gas explosion occurred Dec. 31 at a 10-story residential building in the Russian city of Magnitogorsk in the Chelyabinsk region, 1,400 km east of Moscow.

Search and rescue operations are still under way at the site as three people remain missing.

Wednesday was declared a day of mourning in Chelyabinsk for those killed in the explosion.