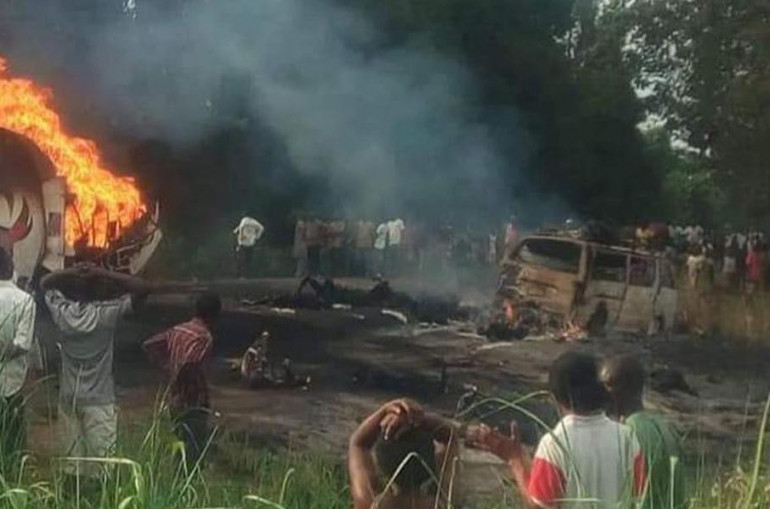 ABUJA, July 3 (Xinhua) -- The death toll of a fuel tanker explosion near a village in southern Nigeria has risen to 48, an official said on Wednesday.

The tragedy occurred on Monday at Ahumbe village in Benue state, when the tanker, which had overturned after an accident, caught fire as dozens of people were trying to scoop the leaked fuel. At least 35 people were earlier confirmed dead.

Deputy governor of Benue Benson Abounu said as of Wednesday morning, the total number of dead victims had risen to 48, and over 90 people were receiving treatment across hospitals in the state.

"There were a good number of people who were burned beyond recognition that even their relations, to pointedly say this is my relation, has become very difficult," Abounu said.

Most of the victims were people who attempted to scoop fuel from the fallen tanker, the local road safety police said earlier.

The fuel tanker had skidded as the driver avoided a pothole in the area. The vehicle flipped and wreaked the havoc.

Baba said the fire caused by the first explosion killed 14 passengers instantly in the bus and some people who were scooping the fuel.

The second explosion, which caused more casualties, happened when onlookers, motorists, and villagers trooped to the scene to either catch a glimpse of the incident or assist in the rescue efforts.

Nigerian President Muhammadu Buhari said in a statement that he was "saddened by the unfortunate loss of lives which could clearly have been avoided."