TOKYO, July 7 (Xinhua) -- The death toll from intense downpours in Japan's deluge-hit southwestern region of Kyushu increased to 55 Tuesday with at least 13 people still unaccounted for, as the government was considering declaring the situation an "extraordinary disaster." 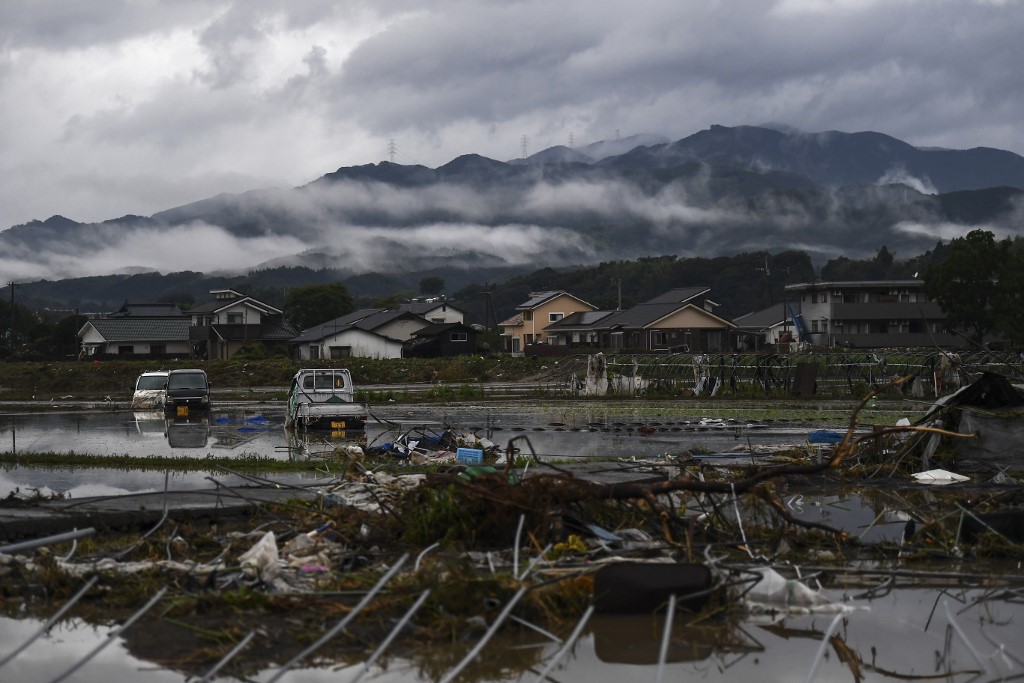 Debris are seen on a paddy field near a residential area hit by torrential rain, in Hitoyoshi, Kumamoto prefecture on July 7, 2020. (Photo: AFP)

Officials in hard-hit Kumamoto Prefecture, in central Kyushu, confirmed that 53 people have died as a result of the torrential rain, which has caused extensive flooding and triggered landslides, while two others who were rescued were reported earlier Tuesday as showing no vital signs.

Search and rescue operations continued for those unaccounted for, although hopes for finding victims are fading as the key 72-hour timeframe for finding people alive has passed, officials in Kumamoto Prefecture said.

Around a dozen rivers have breached their banks in the region including Chikugo River, the largest river in Kyushu, owing to the torrential rain, which has ravaged the region since Saturday.

Power and running water have been knocked out at thousands of homes in Kyushu, officials said, specifically, 3,000 homes are without water in Kumamoto and surrounding prefectures.

Japanese Prime Minister Shinzo Abe has warned that heavy rain may continue to batter wide swathes of the southwestern region until Thursday.

"The government will do its utmost in managing the disaster," Abe said Tuesday.

In doing so, victims are eligible to receive special support to help them expedite the rebuilding of their lives.

Suga said people should remain informed of the latest information issued by regional governments and authorities, such as official warnings and advisories, particularly regarding evacuations.

He also warned the public to remain on high alert for flooded rivers and potential landslides in the affected areas.

With around 1.32 million people on Kyushu island being advised to evacuate, Suga said the government was in close cooperation with regional authorities to try and prevent the spread of COVID-19 infections among those displaced in crowded evacuation centers, such as school gymnasiums and other public facilities.

Japanese Defense Minister Taro Kono, meanwhile, said that the number of Self-Defense Forces (SDF) personnel deployed to the crisis-hit region will be doubled to 20,000 from the 10,000 troops already dispatched to carry out emergency operations.

"The heavy rain is likely to continue. We would like to do our utmost," Kono said.