Death toll rises to about 100 in violent protests in Iraq

BAGHDAD, Oct. 5 (Xinhua) -- Death toll in five days of violent protests in Iraqi capital Baghdad and other Iraqi provinces climbed to 99 with nearly 4,000 people wounded, a member of the Iraqi human rights body said on Saturday. 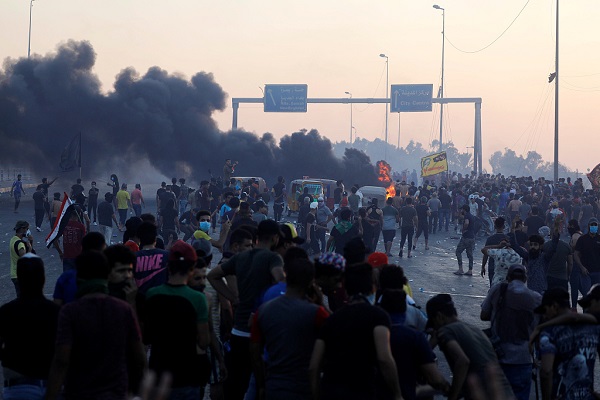 Demonstrators gather at a protest after the lifting of the curfew, following four days of nationwide anti-government protests that turned violent, in Baghdad, Iraq October 5, 2019. (Photo: VCG)

Ali al-Bayati, a member of the Iraqi Independent High Commission for Human Rights (IHCHR), told reporters that the death toll of violence that accompanied the protests during the five days in Baghdad and some provinces rose to 99 people, including security members.

He said that up to 3,991 people were wounded, mostly demonstrators, as violent protests continued in Baghdad and other cities, according to al-Bayati.

Al-Bayati point out that some five demonstrators were killed in the protest near al-Nakheel Mall in Palestine Street earlier on Saturday in eastern Baghdad, as the clashes prompted the security forces to fire live bullets and tear gas canisters to disperse the crowd.

He also said that the protests in the city of Diwaniyah, the capital of al-Qadsiyah province, in southern Iraq resulted in the wounding of 13 demonstrators, as the security forces opened fire to disperse the crowds who tried to enter the provincial government building.

The IHCHR is an independent commission linked to the Iraqi parliament. It was established by UN agencies in Iraq in cooperation with the Iraqi government to promote and protect the rights of all Iraq's people according to international standards.