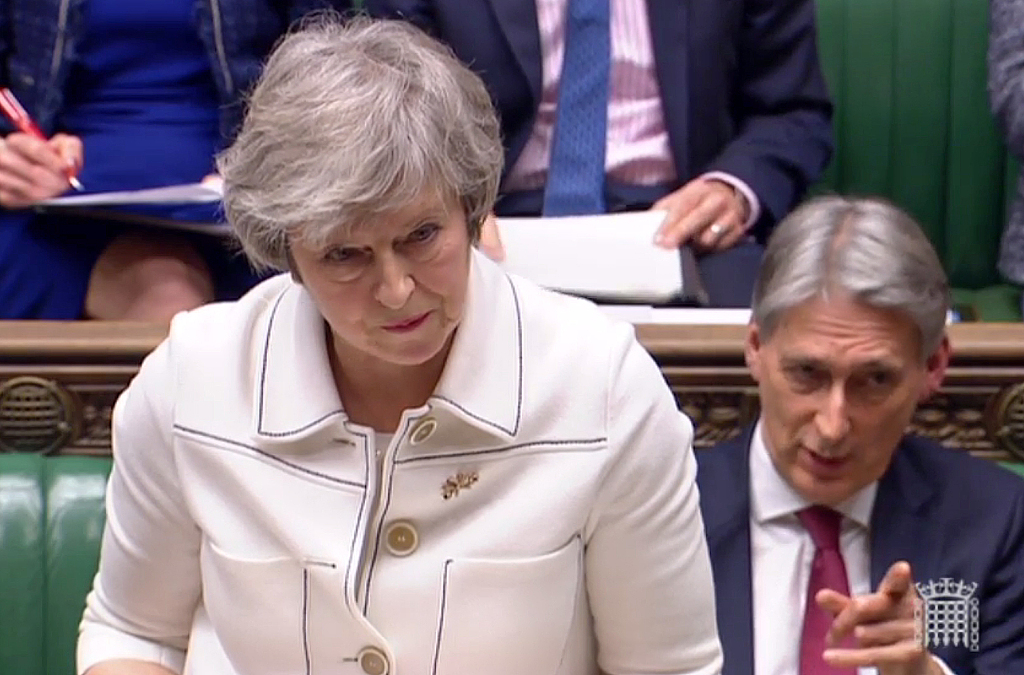 A video grab from footage broadcast by the UK Parliament's Parliamentary Recording Unit (PRU) shows Britain's Prime Minister Theresa May makes a statement to the House of Commons in London on January 14, 2019. (Photo: VCG)

The British parliament holds a historic vote Tuesday on the Brexit deal agreed with the EU and all sides are bracing for turmoil when the text is almost certainly rejected.

With just over two months to go until the scheduled Brexit date of March 29, a bitterly divided Britain is in limbo and the world awaits to see what will happen next.

Few expect the deal to pass, but the scale of Prime Minister Theresa May's defeat could determine whether she tries again, loses office, delays Brexit -- or if Britain even leaves the EU at all.

MPs from all parties oppose the agreement, for different reasons, but on the eve of the vote May urged them to look again.

"But when the history books are written, people will look at the decision of this house... and ask: did we deliver on the country's vote to leave the European Union?"

On the day of the vote, the pound continued to rise against the dollar and at around 0830 GMT was sitting above the $1.29 mark for the first time since late November.

Experts said a massive defeat for the government would mean May's deal is dead in the water and the pound could dive to a two-year low of around $1.22.

The deal was agreed with the EU in November after 18 months of talks described as Britain's toughest challenge since World War II.

But many Brexit supporters fear it keeps Britain too closely tied to the EU and represents a "betrayal", while pro-Europeans argue it leaves the country half-in, half-out.

Rather than heal the divisions exposed by the 2016 Brexit referendum, it has reignited them, with pro-European MPs behind a growing campaign to force a second vote facing death threats and harassment outside parliament.

Brexit supporters around the country have voiced growing frustration with what they see as parliamentary blockage of their democratic vote.

May postponed a House of Commons vote on the deal in December, facing certain defeat, and has since offered MPs clarifications she hopes will convince them.

Criticism is focused on an arrangement to keep open the border with Ireland by aligning Britain with some EU trade rules, if and until London and Brussels sign a new economic partnership.

May has offered parliament greater oversight of this so-called backstop and EU leaders have also given written assurances that the arrangement would not become permanent.

A handful of Conservative MPs have changed their minds to back the deal, but a junior minister resigned on Monday so he could vote against it -- and the core of May's critics say she has not done enough.

Sammy Wilson, Brexit spokesman with the Democratic Unionist Party (DUP), the Northern Irish party on whom May relies for her Commons majority, told the BBC his party would not be forced into backing the deal by fears over the border.

Opposition Labour leader Jeremy Corbyn said May had "completely and utterly failed" to ease MPs' concerns and said if she loses the vote on Tuesday night, she must call an election.

His party has threatened a confidence vote in her government, with shadow Brexit secretary Keir Starmer saying it would take place "soon" after the vote.

Britain's newspapers were already signalling defeat, with the Daily Telegraph headline saying May was "out of allies, out of time", the Guardian warning she was "facing a crushing defeat" and the Times predicting a "historic defeat on Brexit D-Day".

Voting begins at 7:00 pm (1900 GMT), with MPs likely to decide on a number of amendments first, which could seek to change or kill the Brexit deal.

In the event of a defeat, the government must set out what happens next by Monday at the latest.

Speculation is growing on both sides of the Channel that May could ask to delay Brexit, although a diplomatic source told AFP any extension would not be possible beyond June 30, when the new European Parliament will be formed.

May said Monday: "I don't believe that the date of March 29 should be delayed."

The withdrawal agreement includes plans for a post-Brexit transition period to provide continuity until a new relationship is drawn up, in return for continued budget contributions from London.

Without it, and if there is no delay, Britain will sever 46 years of ties with its nearest neighbours this spring with no new arrangements to ease the blow.

MPs fearful of a "no deal" scenario have vowed to use parliamentary procedures to force the government to seek an alternative plan that the Commons can support.