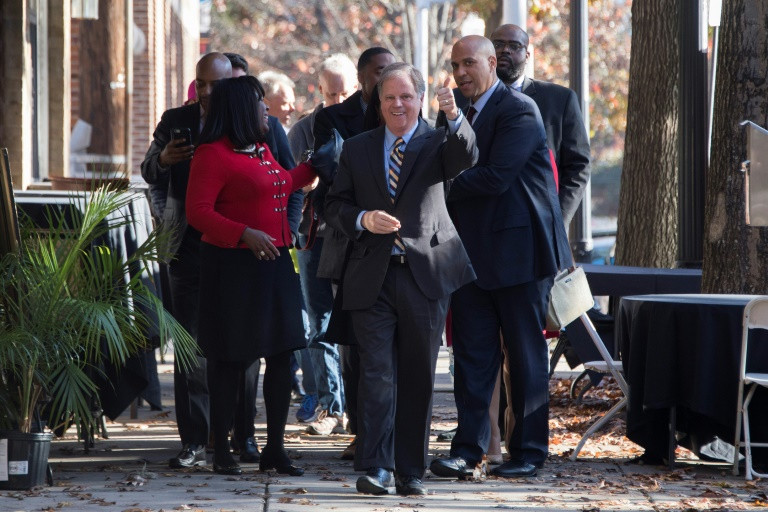 Doug Jones is the first Democrat in a quarter century to get this close to the US Senate from Alabama. Photo: AFP 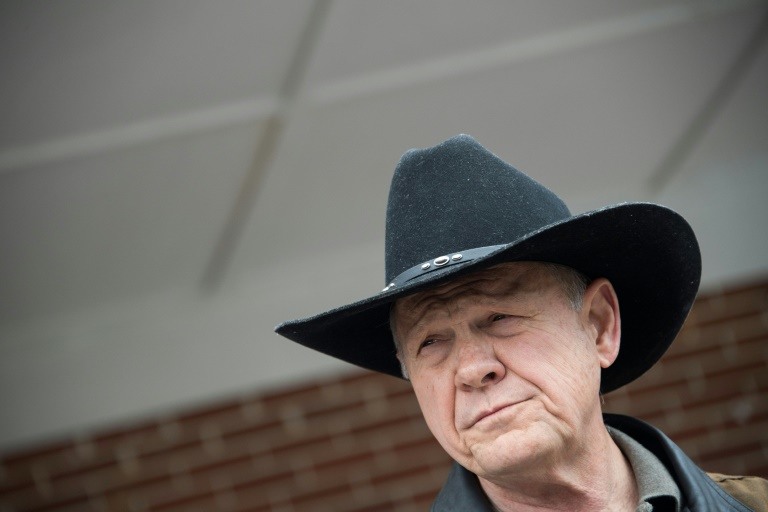 Roy Moore was seen as a shoo-in for a US Senate seat in Alabama, but allegations he molested minors hurt Republicans. Photo: AFP

Alabama voters were casting the last ballots Tuesday in a pivotal US Senate contest between a Republican dogged by accusations he once preyed on teenage girls and a Democrat seeking an upset win in a deeply conservative southern state.

The special election between Republican Roy Moore and Democrat Doug Jones is being seen as a harbinger of whether the Republican Party can retain its slim Senate majority in next year's mid-term elections.

If Moore loses, Republicans will see their majority slip from 52 to 51 in the 100-seat Senate, reducing their margin for maneuver to the bare minimum.

Polls are scheduled to close at 7:00 pm (0100 GMT) across Alabama, with three million voters called to cast ballots.

President Donald Trump has made the high-stakes vote a test of his brand of populism by urging loyalists to elect Moore, a 70-year-old ultra-conservative former state chief justice.

Moore, who wants to bring his Christian religious activism to Washington, has for the past month been fighting accusations he fondled two underage girls in the late 1970s when he was a state prosecutor in his 30s.

Having avoided reporters for weeks, Moore was asked about the allegations after he and his wife Kayla arrived on horseback to vote at a fire station in the town of Gallant.

"We're done with that," said Moore, clad in a cowboy hat. "Let's get back to the issues.

"This is a very important race for our country, for our state, and for the future."

The scandal has put a Senate seat from Alabama within reach of Democrats for the first time in a quarter century.

And it has created a major headache for Republicans. The party's leaders and members of Congress called on Moore to step down after the allegations first surfaced, to no avail. Now, regardless of the outcome, they face a no-win situation.

If Moore wins, the Republican brand risks being sullied by association with the judge, particularly at a time of national upheaval over sexual harassment and the right of victims to be heard.

"Every Republican senator is in a panic if Roy Moore wins this race," former senator Rick Santorum told CNN.

Should he win, Senate Majority Leader Mitch McConnell has signalled that the ethics committee will conduct an investigation into Moore, which could prompt a vote on whether to expel him from the chamber.

To protect the precious Senate seat at stake in Tuesday's vote, Trump ultimately endorsed Moore -- throwing caution to the wind for the mid-term elections, and the party's image.

"VOTE ROY MOORE!" Trump tweeted early on polling day. "Doug Jones is Pro-Abortion, weak on Crime, Military and Illegal Immigration, Bad for Gun Owners and Veterans and against the WALL."

Jones, the Democratic candidate, received support from former president Barack Obama who recorded a robo-call to Alabama voters, in a state where the African-American electorate could prove decisivem.

"We feel very, very good about the outcome," Jones said at an early morning rally.

The latest survey by Fox News put Jones ahead by 10 points although an Emerson poll has Moore ahead by nearly that much. The two are competing to replace Jeff Sessions, who is serving as US attorney general.

The campaign, the first for a Senate seat since Trump's election, has been memorably virulent, in a state accustomed to rough politics.

Ostracized by many in his own party, Moore took a page from Trump's playbook, rejecting the women's allegations as "fake news."

In addition to being hostile to abortion, gay and transgender rights, Moore has attacked illegal immigration and voiced support for a strong defense, presenting himself as a reliable partner to Trump.

Republican voter Katie Cunningham said she was standing by Moore despite the misconduct allegations.

"We're Trump supporters, we're Republicans, we support him all the way."

Democrats have invested heavily in the battle. Thanks to an avalanche of donations, they have flooded the airwaves with TV ads, and deployed leading black Democrats to mobilize the African-American vote -- about a quarter of the electorate.

Jones, a 63-year-old former federal prosecutor, has also tried to win over moderate Republicans and upper middle-class voters repelled by the accusations against Moore.

"It is time that we put our decency, our state, before a political party," Jones told a cheering crowd in Birmingham.

At some point we got to stop looking like idiots to the nation," Barkley said.

His support for abortion rights, however, is anathema to many conservatives, who may choose to write in another candidate aside from the two on the ballot.