WORLD Decoding BRICS: What are the security priorities?

Decoding BRICS: What are the security priorities? 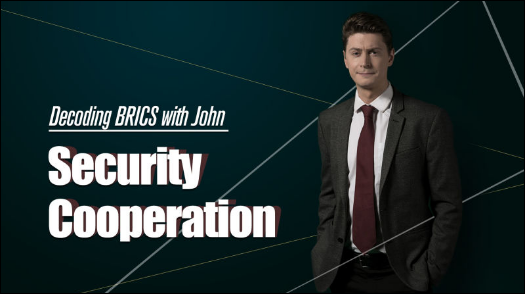 BRICS was established with the aim of amplifying the voices of emerging economies in global institutions and boosting cooperation between member countries.

Security is one of the central areas of collaboration, and with China and Russia permanent members of the UN Security Council, it is also an issue in the "advancement of the restructuring of the global political architecture", which has been strongly pursued.

"Security cooperation is important for BRICS," Jiang Shixue, professor and deputy director of the Institute of European Studies at the Chinese Academy of Social Sciences, told CGTN Digital.

The five BRICS countries – Brazil, Russia, India, China and South Africa – have steadily increased cooperation in the fields of peacekeeping, energy security and counter-terrorism over the past decade, as well as coordinating against new threats such as climate change and cybercrime.

South Africa’s ambassador to BRICS, Professor Anil Sooklal, has identified peacekeeping coordination as being one of his country's top priorities .

"Earlier this year one of the major global players drastically cut their contributions to the UN peacekeeping office and that impacts seriously on global peacekeeping and especially on the African continent,” South Africa's The Independent newspaper quoted Sooklal as saying.

"We felt that in keeping with the spirit of Madiba (former president Nelson Mandela), who was an apostle of peace, we need to advance his vision of peacekeeping."

The UN General Assembly voted in 2017 to cut the organization's peacekeeping budget, under pressure from the US over funding levels. The BRICS countries are all contributors of troops to UN peacekeeping missions, and in the lead up to the Johannesburg summit, South Africa called for the establishment of a BRICS Working Group on Peacekeeping.

BRICS nations share policies and best practice advice on domestic and regional challenges in keeping with the principles of South-South Cooperation, and all five countries are signatories to the Paris agreement on climate change.

"BRICS can cooperate in the field of non-traditional security, but sometimes it's not easy," Jiang said.

A sticking point has been on a common approach to counter-terrorism, although a joint communique that followed the 2017 Xiamen summit called for strengthened cooperation to tackle terrorist organizations and named numerous terror groups.

The declaration said nations should fight terror in accordance with international law, but emphasized the importance of not interfering in the sovereign affairs of individual states. A BRICS Working Group on Counter-Terrorism meets annually.

BRICS nations are also cooperating on building and integrating the digital economy, and agreed at a meeting of communications ministers in 2017 to strengthen dialogue on response to cyber security threats and tackling cyber emergencies. The countries also cooperate on countering cross-border issues such as transnational crime.

Chinese President Xi Jinping said at the Xiamen summit in 2017 that progress on counterterrorism, cybersecurity, peacekeeping and the Middle East had raised the influence of the bloc.

A joint call was made at the 2017 summit for the United Nations and its Security Council to better represent developing countries – reiterating a longstanding push for reform.

China and Russia are two of the five permanent members of the UN Security Council, and have advocated for a greater say for BRICS allies and other emerging economies. The next step for BRICS is to put meat on the bone: detail how reform can be achieved and drive forward.

"China and Russia reiterate the importance they attach to the status and role of Brazil, India and South Africa in international affairs and support their aspiration to play a greater role in the UN," the Xiamen declaration read.

It added that the BRICS countries called for "comprehensive reform" of the UN and the UN Security Council "with a view to making it more representative, effective and efficient, and to increase the representation of the developing countries so that it can adequately respond to global challenges."

The BRICS nations have also made joint statements on international affairs, including condemning a Democratic People's Republic of Korea nuclear test that coincided with the 2017 summit.

The BRICS foreign ministers meeting on June 4, 2018 in Pretoria highlighted common concern over "heightened tensions in the Middle-East region" and the ongoing conflict in Yemen. It also emphasized support for an "Afghan-led, Afghan-owned' national reconciliation process" and a political resolution to the conflict in Syria, and "welcomed the recent developments to achieve the complete denuclearisation of the Korean Peninsula."