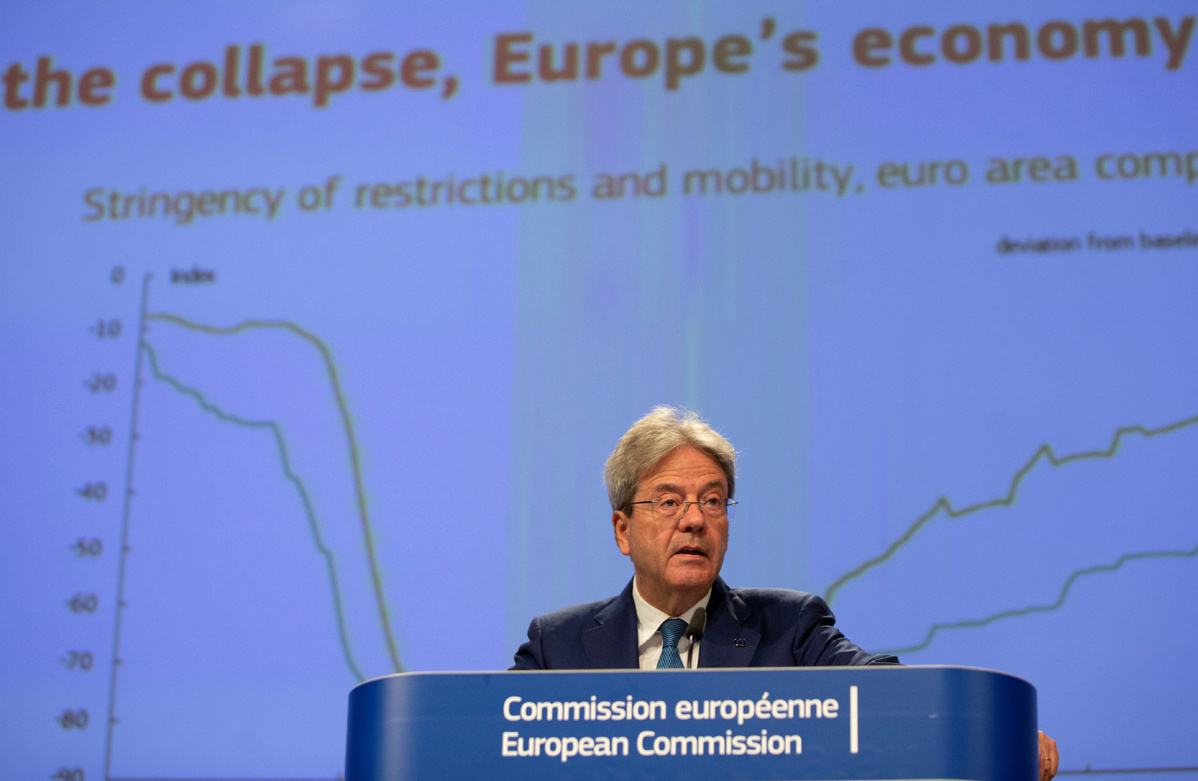 The eurozone economy will sink deeper into a recession this year than previously thought, and the recovery next year will be less robust, according to an updated economic forecast released by the European Commission on Tuesday.

The commission has revised its previous forecasts because lifting novel coronavirus lockdown measures in eurozone countries was taking longer than it had initially anticipated.

The revised forecast predicts the economy of the 19 nations that use the euro will shrink 8.7 percent this year before recovering by 6.1 percent next year.

This compares with the commission's May forecast of a 7.7 percent slump and 6.3 percent growth. France, Italy and Spain will struggle the most, the commission said.

"The economic impact of the lockdown is more severe than we initially expected," European Commission Vice-President Valdis Dombrovskis said in a statement.

"We continue to navigate in stormy waters and face many risks, including another major wave of infections."

Earlier growth forecasts for France, Italy and Spain were cut after they were hit hard by the pandemic, and the commission now expects downturns higher than 10 percent this year in each nation.

In contrast, Germany, which had fewer COVID-19 deaths, will have a 6.3 percent contraction, less pronounced than May's forecast of 6.5 percent.

It comes as Britain's Office for National Statistics revealed a study that showed only 22 percent of people testing positive for novel coronavirus reported having symptoms on the day of their test, highlighting the spread of the virus by people who are not aware they are carrying it.

British Prime Minister Boris Johnson on Monday talked about how asymptomatic spread may have contributed to cases in care homes, comments that have triggered an angry response from care providers.

The prime minister was addressing media questions on plans to adequately fund the adult social care sector within a year.

Johnson said: "We discovered too many care homes didn't really follow the procedures in the way that they could have but we're learning lessons the whole time."

Care home chiefs have said the prime minister's comments were "outrageous" and accused the government of attempting to shift the blame for its own failings.

Nadra Ahmed, the chair of the National Care Association, told Sky News: "I'm absolutely stunned the prime minister thought it was appropriate for him to make that comment and I think he should retract that comment and apologize."

Business Secretary Alok Sharma on Tuesday defended the prime minister, who he said had simply been pointing out that "nobody at the time knew what the correct procedures were".

Sharma told BBC Breakfast there had been a lack of understanding of levels of asymptomatic transmission at the start of the outbreak and that is why "detailed guidance" was put in place for care homes to follow.

He added: "No-one is suggesting care homes have not done a great job under really difficult circumstances."

The president of the United Kingdom's Royal Society, the national academy of sciences, has urged everyone to wear a face covering in public to reduce the risk of a second wave of COVID-19 infections.

Venki Ramakrishnan said people should wear a mask when they leave home but acknowledged that the public remains "sceptical" about the benefits because "the message has not been clear enough" and guidelines have been inconsistent. The UK was "way behind" many countries in their usage, he said.

Current guidance on face coverings varies across the UK, but Public Health England previously said they did not need to be worn outdoors.

Only 5 percent of Spain's population has developed antibodies to the novel coronavirus, casting doubt on the feasibility of herd immunity as a way of tackling the pandemic, the medical journal the Lancet reported.

"Despite the high impact of COVID-19 in Spain, prevalence estimates remain low and are clearly insufficient to provide herd immunity," the study's authors said in the report.

"This cannot be achieved without accepting the collateral damage of many deaths in the susceptible population and overburdening of health systems.

"In this situation, social distance measures and efforts to identify and isolate new cases and their contacts are imperative for future epidemic control."

Similar studies have been conducted in China and the United States and the findings from those reports show the majority of the population appeared to remain "unexposed", according to Lancet commentary.