BEIJING, Jan. 23 (Xinhua) -- While the COVID-19 pandemic is still raging across the world and the new coronavirus variant causing even more challenges, vaccination campaigns against the virus in the European Union (EU) and the United States have been lagging behind as a result of delivery and distribution delays, according to media reports. 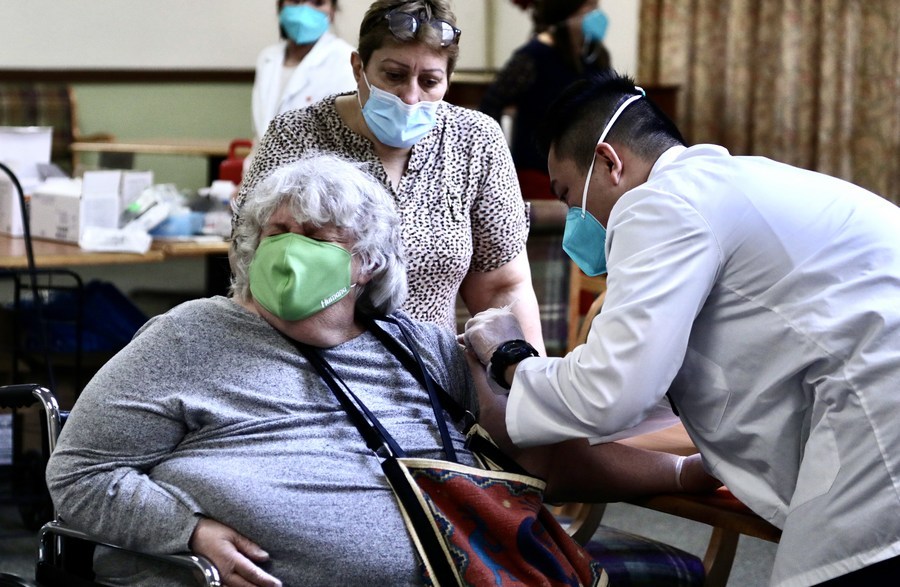 PEOPLE IN NEED OF SECOND SHOT

Italian authorities said on Thursday that delays in the delivery of one of the two authorized vaccines would continue affecting Italy's vaccination campaign in the short term, with a 20-percent shortfall expected next week.

Up to Thursday, the vaccines had been administered to over 1.28 million people in Italy, and the shots accounted for 82.3 percent of the 1,558,635 doses delivered so far. However, the US pharmaceutical company Pfizer, the major provider of those doses, recently announced it would slow down its deliveries to EU countries.

"We have been told (by Pfizer) that we will receive 20 percent fewer doses next week," Italy's Extraordinary Commissioner for the Coronavirus Emergency Domenico Arcuri told a press conference, adding that such delays, including the 29-percent cut last week, would make a visible impact on the vaccination plan when some people were in need of the second mandatory shot.

The Pfizer vaccine has to be administered in two shots 21 days apart.

Following Pfizer, British drugmaker AstraZeneca is to cut deliveries of its COVID-19 vaccine to the EU by 60 percent in the first quarter of 2021 due to "production problems," an unnamed senior EU official told media Friday.

AstraZeneca, which developed its vaccine with the University of Oxford, disclosed the situation in a statement giving few details. "Initial volumes will be lower than originally anticipated due to reduced yields at a manufacturing site within our European supply chain," the statement was quoted by BBC as saying.

The company signed a deal with the EU to provide "at least 300 million doses of its vaccine," according to BBC, but was unlikely to meet that promise in the first quarter, nor able to indicate delivery targets for the second quarter due to production issues.

To date, EU countries have administered over 5 million doses to their citizens. The aim was to inoculate 70 percent of adults by the end of August, the newspaper The Guardian reported.

Under the current situation, Austrian Health Minister Rudolf Anschober said that a delay would be "completely unacceptable."

VACCINE PUZZLE FOR NEW US ADMINISTRATION

As the United States endures records of COVID-19 infections and deaths, US President Joe Biden on Thursday unveiled his national strategy for addressing the pandemic, which starts with a national vaccination campaign aiming to administer 100 million doses of two-stage coronavirus vaccines within 100 days.

The Biden administration is trying to "figure out exactly what's holding up the national COVID-19 vaccine rollout, searching for any hiccups in the manufacturing processes, suppliers and distribution networks," CNBC on Thursday quoted Rochelle Walensky, director of the US Centers for Disease Control and Prevention (CDC), as saying.

As of Saturday, nearly 40 million doses of vaccine have been distributed to states in the country, but only around 19 million have actually been administered, according to data provided by the CDC.

The New York Times reported that it was health officials and hospitals "struggling with a lack of resources" that explained why vaccine distribution was taking longer than expected. Holiday staffing also contributed to delays, the newspaper noted.

"The holiday season has meant that people are off work and clinics have reduced hours, slowing the pace of vaccine administration," it said.

The delivery delays, production issues and those sorts of logistical problems not only put the vaccination campaign against COVID-19 behind schedule, but also raised fears about how soon the affected countries will be able to tame the pandemic.

Italy has planned to take legal action against Pfizer because of the delays, Arcuri said in a statement on Tuesday.