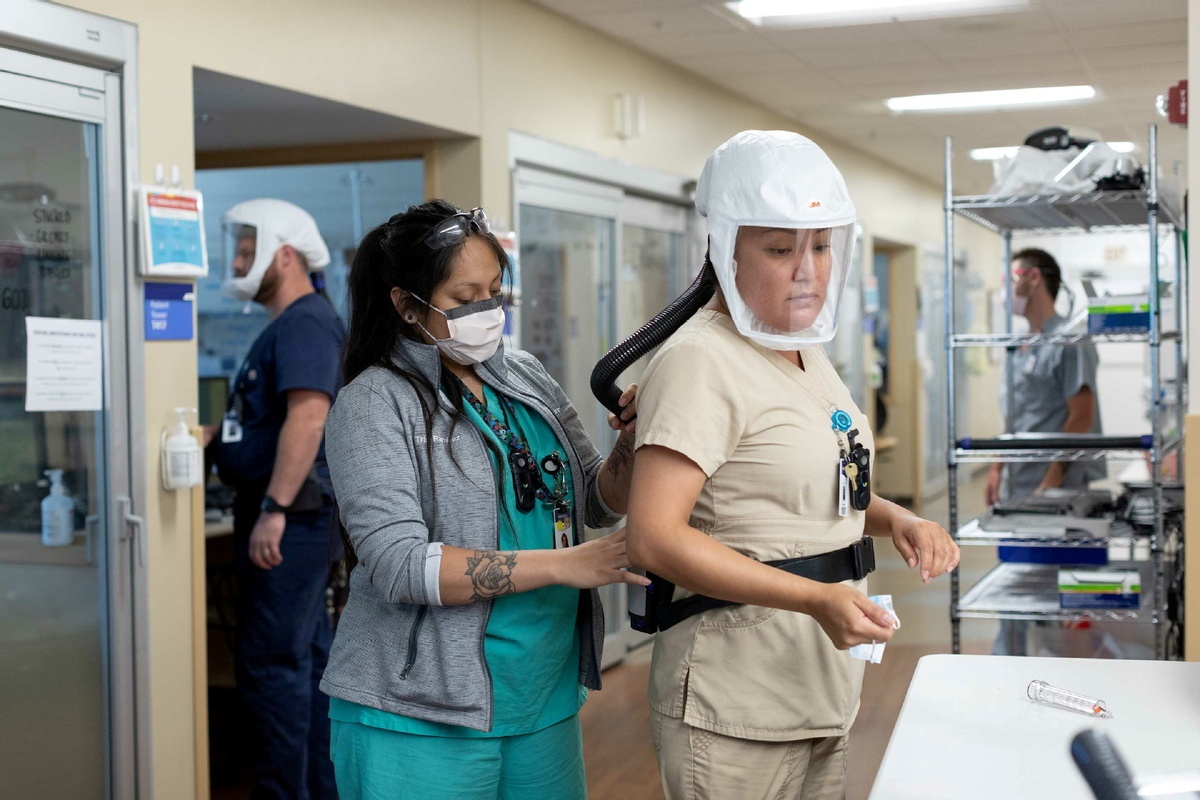 Healthcare personnel work in a coronavirus disease (COVID-19) intensive care unit where they are dealing with a surge in cases of the Delta variant at Intermountain Medical Center in Murray, Utah, US, in this handout photo provided July 23, 2021. (Photo: Agencies)

Coronavirus cases and hospitalizations in the United States are at a six-month high, fueled by the rapid spread of the Delta variant across swathes of the country grappling with low vaccination rates.

Nationwide, COVID-19 cases have averaged 100,000 for three days in a row, up 35% over the past week, according to a Reuters tally of public health data. Louisiana, Florida and Arkansas reported the most new cases in the past week, based on population.

Hospitalizations rose 40% and deaths, a lagging indicator, registered an 18% uptick in the past week.

The intensifying spread of the pandemic has led to cancellation of some large high-profile events. One notable exception is an annual motorcycle rally in Sturgis, South Dakota, which has been proceeding as planned.

Florida set a new single-day record with 28,317 cases on Sunday, according to data from the US Centers for Disease Control and Prevention.

Hospitalizations in Florida have been at record highs for eight days in a row, according to the Reuters analysis. Most Florida students are due back in the classroom this week as some school districts debate whether to require masks for pupils.

Holding signs, mask proponents and opponents gathered at the Pinellas County Schools building near St. Petersburg on Monday where the school board called a special session to discuss mask protocols.

The head of the nation's second-largest teachers' union on Sunday announced a shift in course by backing mandated vaccinations for US teachers in an effort to protect students who are too young to be inoculated.

The number of children hospitalized with COVID-19 is rising across the country, a trend health experts attribute to the Delta variant being more likely to infect children than the original Alpha strain.

With the virus once again upending Americans' lives after a brief summer lull, the push to vaccinate those still reluctant has gained fresh momentum.

In the latest development, the Pentagon on Monday said that it will seek Biden's approval by the middle of September to require military members to get vaccinated.

The evolving pandemic and the rapid community spread spurred by the Delta variant have already prompted the cancellation of some large-scale events. Last week, organizers canceled the New York Auto Show that had been set for later this month.

The New Orleans Jazz Fest was canceled for the second straight year as Louisiana fights a severe outbreak.

But fears about the Delta variant seem to not have dampened the mood in Sturgis, a small town in South Dakota that welcomes hundreds of thousands of motorcycle enthusiasts for the annual Sturgis Motorcycle Rally.

"It is one of the biggest crowds I have seen," Meade County Sheriff Ron Merwin said in an email. "I think there will definitely be some spread."

The city of Sturgis has partnered with health officials to provide COVID-19 self-test kits to rally-goers but the event does not require proof of vaccination or mask-wearing.

Last year, health officials cited the rally as a super-spreader event that contributed to an autumn surge in the Midwest.

While cases and hospitalizations were relatively low in South Dakota when the event started on Aug. 7, 2020, three months later the state set a record for hospitalized COVID-19 patients and new infections.

In the month of November alone, the state lost 521 people to COVID-19, nearly three times the number of deaths reported in October, according to a Reuters tally.