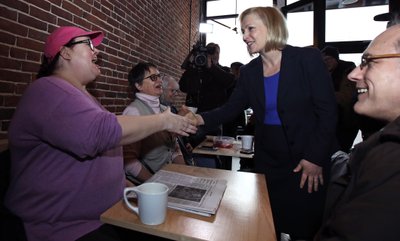 Five Democratic senators vying for their party’s nomination to challenge President Donald Trump in 2020 are fanning out across the country Saturday to campaign and meet voters.

Kamala Harris of California plans to spend her second straight day in the pivotal early-voting state of South Carolina, holding a town hall meeting in Columbia, the capital. Also visiting the state is Elizabeth Warren of Massachusetts, who’s set to meet voters in Greenville before heading to Georgia — an unusual early stop for a White House hopeful but one that signals Democratic hopes to make inroads in the South.

Cory Booker of New Jersey and Kirsten Gillibrand of New York are focusing on New Hampshire. For Booker, it’s his first visit to there since joining the race earlier this month.

Amy Klobuchar of Minnesota is making her own uncommon choice for early campaigning by visiting Wisconsin before heading to Iowa, home to the nation’s first caucus.

The senators are campaigning during the long holiday weekend that marks the start of Congress’ first recess this year. And their outreach to voters comes in the wake of Trump’s controversial decision to declare a national emergency in order to unilaterally redirect federal money for his promised wall along the US-Mexico border.