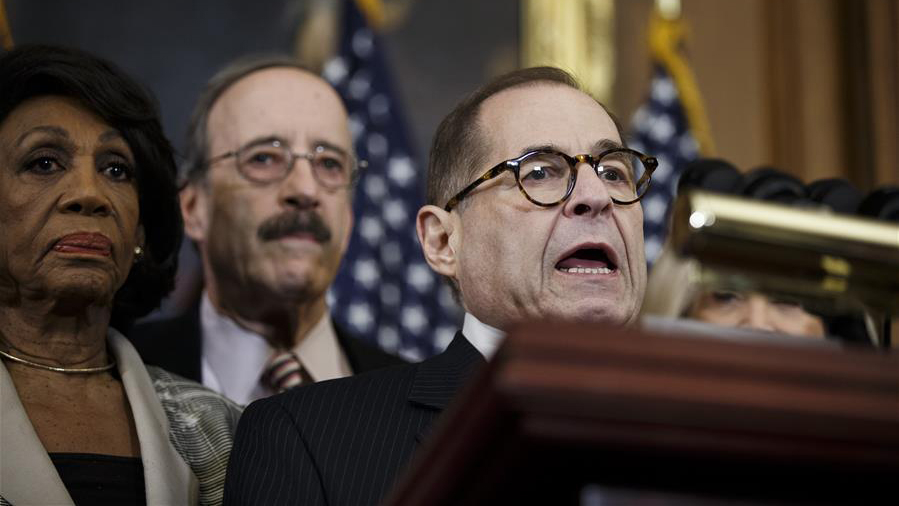 WASHINGTON, Dec. 13 (Xinhua) -- After a two-day marathon debate, the US Democrat-led House Judiciary Committee on Friday passed both articles of impeachment, accusing President Donald Trump of abusing power and obstruction of Congress.

Along partisan lines, the committee eventually voted separately on each of the articles.

Democrats outnumbered Republicans on the panel 24 to 17, with 23 Democrats voting to send the measures to the full House. One Democrat, Ted Lieu from California, was absent after undergoing an unexpected medical procedure earlier in the week.

All 17 panel Republicans voted no, arguing that the evidence is thin and weak. They also criticized Democrats were pushing a rapid-paced impeachment which will set a dangerous precedent.

Committee Chairman Jerry Nadler postponed the final votes on the articles to Friday after more than 14 hours of debate on Thursday.

The articles are widely expected to get a full House vote as quickly as next week, days before Christmas. President Donald Trump will be impeached if the House approves any of the two articles by a simple majority vote.

Trump has repeatedly denied any wrongdoing, slamming the Democrats' effort as a "witch hunt" and hoax.

"All of our presidents would be impeached under this Rogue House of Democrat Leadership," Trump tweeted before the vote on Friday morning.