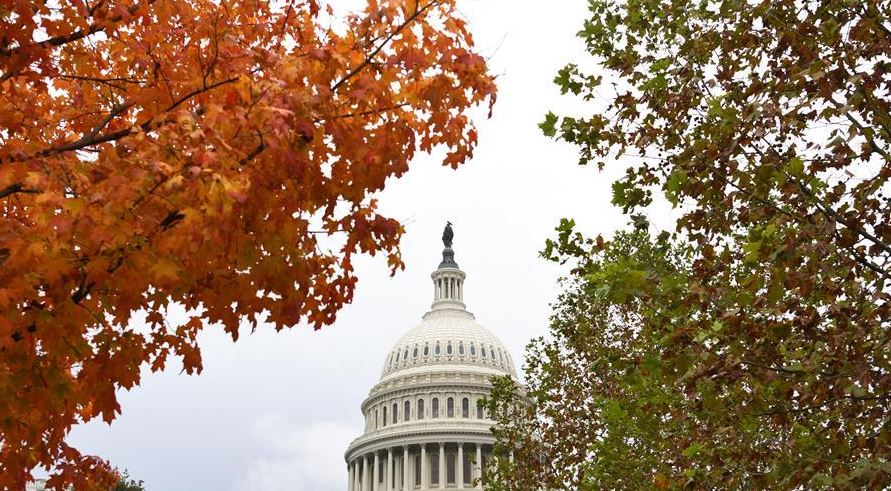 The US Capitol is seen in Washington DC Nov. 6, 2018. The US Republican Party on Tuesday managed to maintain a Senate majority in the midterm elections, while the Democrats wrestled the House majority from the Republicans, according to projections of multiple news outlets. (Photo: Xinhua)

DENVER, the United States, Nov. 7 (Xinhua) -- With the elevation of a number of liberal Democrats from the US West in Tuesday's pivotal midterm elections, the White House could face a rocky road in the coming two years.

Political insiders told Xinhua on Wednesday that with the US House of Representatives shifting to Democratic control, California alone will place a number of politicians into key powerful Congressional leadership positions.

The president's biggest future foe is another Californian -- the expected new speaker of the US House of Representatives, San Francisco's Nancy Pelosi, also the Democratic leader of the House since 2011.

US President Donald Trump called Pelosi on Tuesday night to congratulate her on Democratic control of the House and tweeted that he was confident he would "work with the Democrats."

"If he thinks the Democrats will forget his political grandstanding and games, then he must be delusional," said former Washington policy analyst David Richardson.

But the president's most pressing problem with the House shift will be that the new chairman of the House Ways and Means Committee will request an examination of Trump's federal tax returns, something the president has refused to disclose.

The likely incoming chairman, Massachusetts Democrat Richard Neal, has said he will go after Trump's filings with the Internal Revenue Service.

"Since Reagan, urban areas have been blue and rural areas have been red. The suburbs have been purple. Last night they became much bluer," Richardson said, pointing to a number of unexpected Democratic victories.

Crow, running on a traditional Democratic platform, beat the Republican by 10 points, and Colorado's new governor, Jared Polis, promised to fight for universal healthcare and renewable energy standards, both stances in diametric opposition to Washington's actions.

"Colorado is a swing state that went for (Democratic presidential candidate Hilary) Clinton in 2016 and has seen a massive influx of millennials, and these people want no part of Trump's agenda," said University of Colorado graduate student Walter Newton.

And across the West, unexpected Democratic victories showed a mounting resistance toward policies issued from the White House.

In Arizona, another state flooded by millennials in the past decade, as of Wednesday night, the Senate race was too close to call, with Republican Martha McSally leading Democrat Kyrsten Sinema by a razor thin 49.4-48.4 margin.

"Arizona is traditionally red, and this election saw (Republican Senator Jeff) Flake's seat up for grabs - Sinema's strong showing shows a Democratic shift, regardless of whether she pulls it off," Phoenix restauranteur Franklin Cardona said Wednesday.

Across the country, staunchly liberal women's groups were celebrating a record number of women elected to Congress in 2018.

"These results show women have had enough," she said in a press conference.

Democrats took control of the House after voters turned out in record numbers. Although Republicans retained control of the Senate, with a Democratic House majority, Congress no longer has the votes to defund Planned Parenthood, said Dana Singiser, vice president of public policy and government affairs at Planned Parenthood Action Fund in a statement.

"Nationally, I'd have to call the results mixed," said Oregon professor Stewart King, a former US State Department official. "Although Democrats got about 10 million more votes than Republicans."