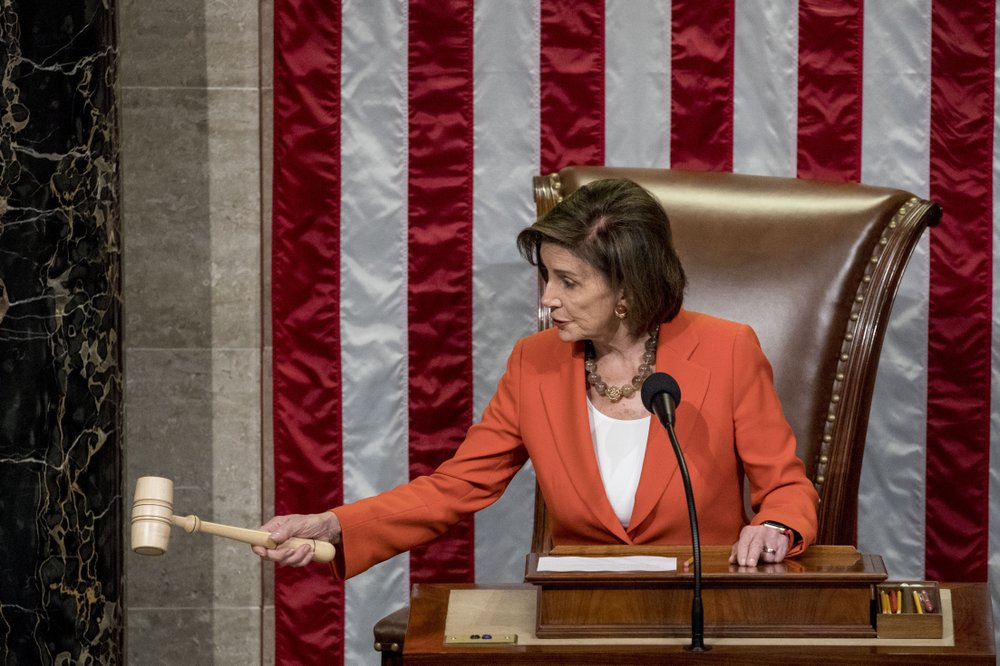 House Speaker Nancy Pelosi of California gavels as the House votes 232-196 to pass resolution on impeachment procedure to move forward into the next phase of the impeachment inquiry into US President Trump in the House Chamber on Capitol Hill in Washington, October 31, 2019.  (Photo: AP)

Democrats rammed a package of ground rules for their impeachment inquiry of President Donald Trump through a sharply divided House Thursday, the chamber’s first formal vote in a fight that could stretch into the 2020 election year.

The tally was 232-196, with all Republicans who voted opposing the resolution and just two Democratic defectors joining them: freshman Rep. Jeff Van Drew of New Jersey and 15-term veteran Rep. Collin Peterson of Minnesota, one of his party’s most conservative members. Both represent GOP-leaning districts.

The vote laid down the rules as lawmakers transition from weeks of closed-door interviews with witnesses to public hearings and ultimately to possible votes on whether to recommend Trump’s removal from office.

The action also took on more than technical meaning, with each party aware that the impeachment effort looms as a defining issue for next year’s presidential and congressional campaigns.

The vote, which occurred on Halloween, drew a familiar Twitter retort from Trump: “The greatest Witch Hunt in American History!” 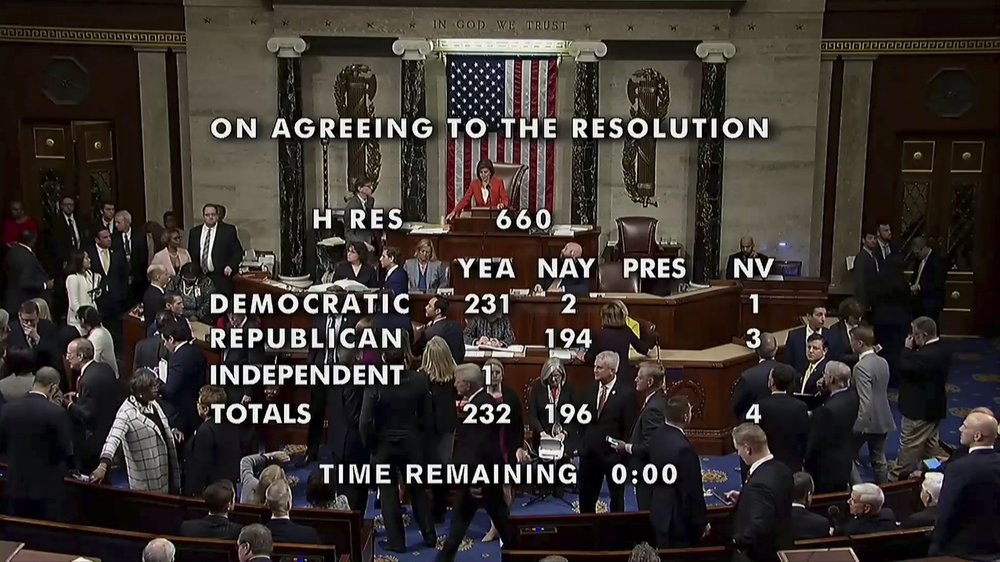 The floor of the US House of Representatives in Washington and the vote count to approve the rules for its impeachment inquiry of President Donald Trump, October 31, 2019.  (Photo: AP)

During the debate, Democrats spoke of lawmakers’ duty to defend the Constitution, while Republicans cast the process as a skewed attempt to railroad a president whom Democrats have detested since before he took office.

“What is at stake in all this is nothing less than our democracy,” said Pelosi. Underscoring her point, she addressed the House with a poster of the American flag beside her and began her remarks by reading the opening lines of the preamble to the Constitution.

House Minority Leader Kevin McCarthy, R-Calif., said Trump had done nothing impeachable and accused Democrats of trying to remove him “because they are scared they cannot defeat him at the ballot box.”

Independent Rep. Justin Amash of Michigan, who left the Republican Party earlier this year after saying he was open to considering whether Trump should be impeached, also backed the measure.

The investigation is focused on Trump’s efforts to push Ukraine to investigate his Democratic political opponents by withholding military aid and an Oval Office meeting craved by the country’s new president.

Democrats said the procedures — which give them the ability to curb the president’s lawyers from calling witnesses — are similar to rules used during the impeachment proceedings of Presidents Richard Nixon and Bill Clinton. Republicans complained they were skewed against Trump.

It is likely to take weeks or more before the House decides whether to vote on actually impeaching Trump. If the House does vote for impeachment, the Senate would hold a trial to decide whether to remove the president from office.

Both parties’ leaders were rounding up votes as Thursday’s roll call approached, with each side eager to come as close to unanimity as possible.

Republicans said a solid GOP “no” vote would signal to the Senate that the Democratic push is a partisan crusade against a president they have never liked.

Democrats were also hoping to demonstrate solidarity from their most liberal elements to their most moderate members. They argued that GOP cohesion against the measure would show that Republicans are blindly defending Trump, whatever facts emerge.

“It will show the other party has become the party of Trump. It’s really not the Republican Party any longer,” said Rep. Dan Kildee, D-Mich.

Republicans said they’d use the vote to target freshman Democrats and those from districts Trump carried in 2016. They said they would contrast those Democrats’ support for the rules with campaign promises to focus on issues voters want to address, not on impeaching Trump.

The House GOP’s campaign arm sent emails to reporters all but taunting some of those Democrats including freshman Rep. Chris Pappas, D-N.H. “Pappas wants to be a one-termer,” one said.

Pelosi decided to have the vote following weeks of GOP claims that the inquiry was invalid because the chamber had not voted to formally commence the work.

The rules lay out how the House Intelligence Committee — now leading the investigation by deposing diplomats and other officials behind closed doors — would transition to public hearings.

That panel would issue a report and release transcripts of the closed-door interviews it has been conducting.

The Judiciary Committee would then decide whether to recommend that the House impeach Trump.

According to the rules for hearings, Republicans could only issue subpoenas for witnesses to appear if the entire panel approved them — in effect giving Democrats veto power.

Attorneys for Trump could participate in the Judiciary Committee proceedings. But in a bid for leverage, panel Chairman Jerrold Nadler, D-N.Y., would be allowed to deny “specific requests” by Trump representatives if the White House continued refusing to provide documents or witnesses sought by Democratic investigators.

The rules also direct House committees “to continue their ongoing investigations” of Trump.

Top Democrats think that language will shield their members from weeks of Republican complaints that the inquiry has been invalid because the House had not formally voted to begin that work.

Democrats have said there’s no constitutional provision or House rule requiring such a vote. 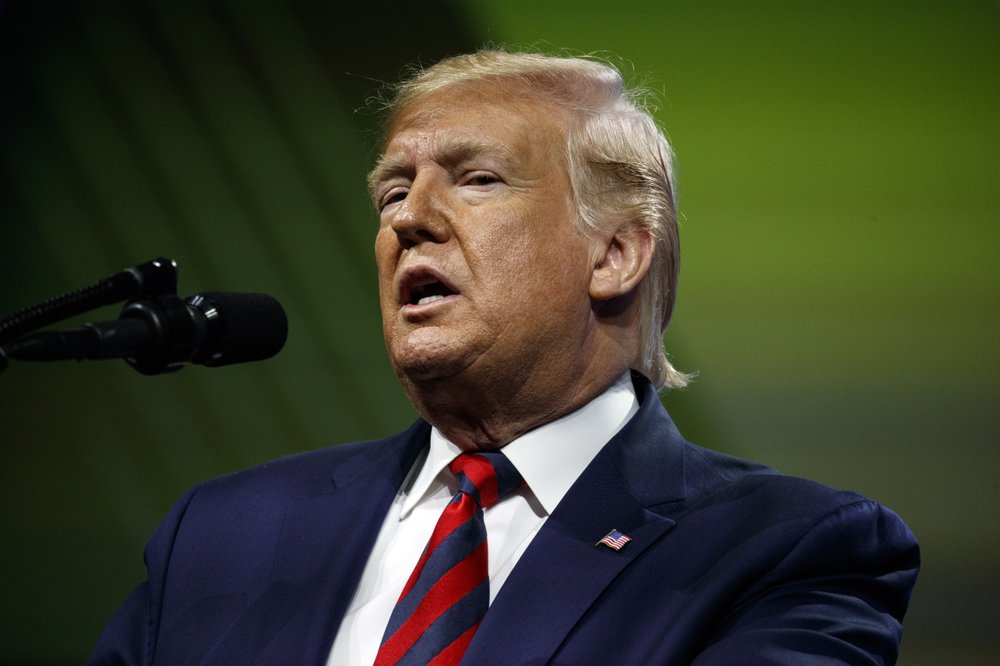 US President Donald Trump speaks to the International Association of Chiefs of Police Annual Conference and Exposition, at the McCormick Place Convention Center Chicago, in Chicago, October 28, 2019. (Photo: AP)