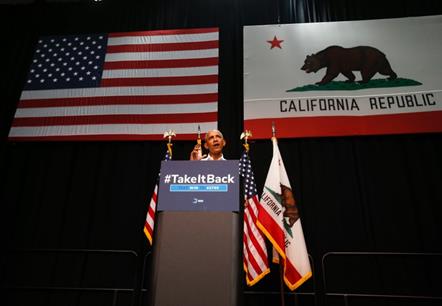 Former US President Barack Obama spoke at a rally in California on Saturday saying that the upcoming midterm elections is a chance "to restore some sanity to our politics".

California is a state where Democrats are hoping to grab seven seats currently held by Republicans, and Obama wants to get a good turnout from both Democrats and independents, who make up a big portion of voters here.

“If we don’t step up, things are going to get worse,” said Obama, coming to the frontlines of the Democratic battle to making it clear he wants the American people to take back Congress in the midterms.

Obama also warned of a “push and pull” between “who promotes the politics of hope and those who exploit the politics of fear.” He said: “In two months…we have the chance to flip the House of Representatives and make sure there are real checks and balances in Washington.”

Earlier this month, Obama re-entered the national political debate at the University of Illinois at Urbana-Champaign, calling President Donald Trump a “threat to our democracy” who practices the “politics of fear and resentment.”

It is rare that former presidents to return to the campaign trail after leaving office, let alone a former president directly confronting a sitting president. The New York Times says it is an “extraordinary spectacle.”

Vice President Mike Pence said it was “very disappointing to see Obama break with the tradition of former presidents” in an interview on Fox News Sunday.

Trump dismissed Obama’s Illinois speech at a fund-raiser in Fargo, North Dakota: “I’m sorry, I watched it, but I fell asleep,” he said. “I found he’s very good, very good for sleeping.”

Trump started campaigning on September 6 in Montana and North Dakota, where two Democratic senators are up for reelection. Aides say he'll spend much of the fall at rallies in swing states.

The New York Times reported that Obama is also expected to campaign on Thursday in Cleveland for Richard Cordray, a Democratic nominee for Ohio governor, and other Democrats.

What are the midterm elections

The biennial November elections will see general elections for the legislative bodies of the United States, including the Senate, serving six-year terms, and the House of Representatives with a two-year term. The one held in the middle of a presidency is called “midterm election.” Every two years the Senate has one-third of its members up for election while the House has all its membership up for election.

Since the party division of the US Congress plays a crucial role in the organization and operations of both chambers, the Democratic Party and the Republican Party, the two main parties in the US, are locked in a fierce battle for control of Congress in the midterms. The Republican Party has held the majority in both houses during the first two years of Trump’s presidency.

With control of Congress swaying either way, each party could have the advantage to pass their legislative agendas or block opposing agendas to the president.

The polls will open on November 6 this year to elect members for 34 of the 100 Senate seats and each of the 435 House seats.

Why do the 2018 midterm elections matter

The stakes are high for both parties during the midterms.

Even though the president’s party usually loses seats in the first midterm election after taking office, Democrats face a steep climb.

According to the Financial Times, they must defend all 26 of their Senate seats up for election and take two seats from Republicans in order to win a majority. Several of the Democratic seats are in states that Trump won by a large victory in the 2016 presidential race. Democrats also need 24 seats to flip the House.

As for the Republican Party, this year’s midterm election will largely be a public opinion referendum on Trump, and the result will be enormously important in shaping the future of Trump’s presidency.

Trump has thrust himself into the center of the campaign and he grabbed his ardent supporters. As of the end of August, 35 of the 37 candidates supported by Trump won their midterm primaries, gradually making the party “Trumping”, while the traditional moderate forces within the party became weaker.

Trump retains the support of his most loyal fans, but his credibility among other Americans is eroding.

Despite the economic growth, Republicans must contend with the constant swirl of controversy hanging over the White House, including special counsel Robert Mueller's ongoing probe into Russian election interference and the revelation of administration disarray in a new book by Washington-watcher Bob Woodward and an anonymous New York Times op-ed.

79 percent of Republican voters and 70 percent of Democratic voters believe that once the Democrats control the House, impeachment proceedings against Trump will be on the table. Though the Democratic leadership did not mention it officially, many radical Democratic candidates have used “launching impeachment” as a campaign slogan.

Moderate Democratic candidates tend to be prudent on “anti-Trump” statements and call on economic reform to fight for independent voters and even moderate Republican voters.

Politico reported that their analysis suggests that “the battle for the House is leaning toward Democrats, while Republicans are likely to keep control of the Senate,” and when that happens, Republicans “might even have another shot at repealing Obamacare or shrinking the size of the federal government.”