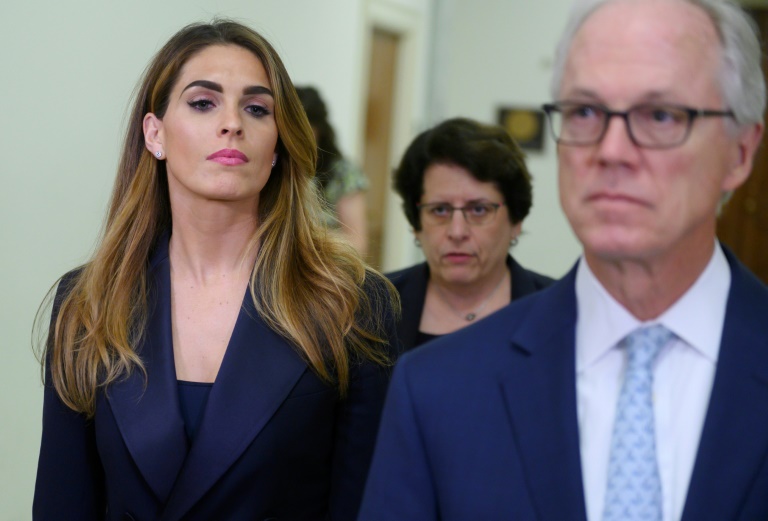 Ex-White House communications director Hope Hicks, once a confidante to President Donald Trump, testified in a closed session of the House Judiciary Committee, but Democrats said she refused to answer questions about her White House tenure. (Photo: AFP)

Hope Hicks, a former longtime aide to US President Donald Trump, testified before Congress Wednesday, but Democratic lawmakers said she refused to answer several questions about her time at the White House.

Following her appearance in a closed-door session of the House Judiciary Committee as part of the panel's investigation into possible obstruction of justice by Trump, the president weighed in to accuse Democrats of putting his onetime close confidante "through hell."

Multiple Democrats emerged from her hours of testimony to say Hicks snubbed nearly all questions about her White House tenure as part of a pattern of stonewalling by an administration intent on blocking investigations of the president.

Democrats vowed to take the issue to court in order to compel answers to their questions.

The White House had made clear in a letter to judiciary committee chairman Jerry Nadler that Hicks was "absolutely immune" from being compelled to answer questions about her time in Trump's administration.

But Nadler emerged from the session to say Democrats would "destroy" those immunity claims in court.

Other committee Democrats expressed frustration at the filibustering Hicks, with Democrat Ted Lieu saying he was "watching obstruction of justice in action" when she and her lawyers repeatedly objected to questions about her White House tenure.

"The administration's position is absurd & they will lose in court," Lieu tweeted.

Hicks, who served as Trump's campaign press secretary and then his White House communications director, was asked about campaign activities, and the multiple incidents of potential obstruction of justice that were detailed in special counsel Robert Mueller's report.

Mueller spent nearly two years investigating Russia's interference -- including engaging in a propaganda and hacking effort to damage Hillary Clinton -- in the 2016 US election.

Democrats believe Trump may have broken the law as a candidate and as president.

Hicks was interviewed by Mueller's team in 2018 and her testimony was cited frequently in his report, including her handling of details of an infamous Trump Tower meeting in New York where campaign officials expected to receive damaging material on Clinton from Russian contacts.

She also told Mueller's team about a July 2017 episode in which Trump's former campaign manager Corey Lewandowski told her that the president asked him to meet with then-attorney general Jeff Sessions and "deliver a message that he needed to do the 'right thing' and resign."

Trump vented on Twitter about the way in which Hicks was treated.

"So sad that the Democrats are putting wonderful Hope Hicks through hell, for 3 years now, after total exoneration by Robert Mueller & the Mueller Report," he said.

"They were unhappy with result so they want a Do Over. Very unfair & costly to her. Will it ever end?"

Trump, in a bid to block Democrats' investigations of him, asserted executive privilege last month to bar cooperation from current and former aides.