Democratic lawmakers unveiled plans to emerge out of the partial shutdown of the federal government by examining and voting on an appropriations bill as soon as they take control of the House of Representatives -- on Thursday. 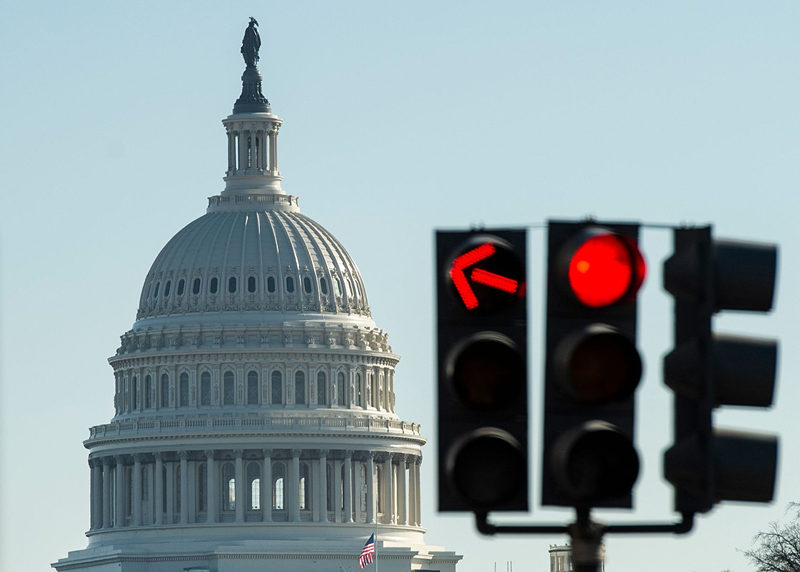 But the bill's future appeared uncertain. The text does not include financing for the US-Mexican border wall sought by President Donald Trump to halt illegal immigration.

In a tweet taunting Democrats for their refusal to fund the border fence, the Republican president said: "The Democrats will probably submit a Bill, being cute as always, which gives everything away but gives NOTHING to Border Security, namely the Wall.

"You see, without the Wall there can be no Border Security - the Tech 'stuff' is just, by comparison, meaningless bells & whistles."

He also reiterated his claim -- so far unproven -- that Mexico was paying for the border wall through the new trade deal struck between all three North American countries (Canada, Mexico and the United States).

"I'm in the Oval Office. Democrats, come back from vacation now and give us the votes necessary for Border Security, including the Wall," Trump tweeted.

Congress is in recess for the New Year's holiday but will reopen on Thursday, while Trump has stayed in the White House through the year-end festivities, shelving his annual vacation to his private Florida golf resort amid the impasse.

To retaliate over the Democrats' refusal to fund the wall, Trump is refusing to sign a wider spending package.

That has resulted in swaths of the federal government being shut down over the Christmas and New Year's holidays -- and for the foreseeable future until a deal is reached.

The standoff has turned into a test of strength between Trump and the Democrats, who will enter the new Congress in 2019 as the majority in the House of Representatives, after a decisive victory in the November midterm elections.

Trump says a wall is needed along the whole border to keep out migrants trying to enter the country illegally, casting them as an "invasion" force of dangerous criminals.

On Monday, he called the border "an 'Open Wound,' where drugs, criminals (including human traffickers) and illegals would pour into our Country."

Democrats say the wall idea -- one of the president's key election campaign platforms -- is a distraction from more complicated immigration problems and a tool for Trump to whip up support among his conservative base.

Democrats plan to put the ball back in Trump's court immediately on Thursday by passing a general spending bill that would allow the government to reopen fully, but would not include extra wall construction money.

They are proposing to pass administrative budgets that are not controversial lasting through September 30, while only financing until February 8 the thornier budget of the Department of Homeland Security, which oversees border security.

The budget extension "would allow time for President Trump to reach agreement with Congress on border security," the Democrats explained.

Similar proposals were passed by the Republican-controlled Senate in recent days, until Trump suddenly withdrew his support. Those texts did not reach the House.

"It would be the height of irresponsibility and political cynicism for Senate Republicans to now reject the same legislation they have already supported," Democratic leaders said in a statement.

"Once the Senate passes this legislation and puts us on a path to reopening government, the president must come to his senses and immediately sign it into law."

The bill will go from the Democratic-controlled House to the Republican-held Senate and from there, it would need Trump's signature.

If he refused, still insisting on the wall funding, Democrats would then get ammunition to accuse him of being responsible for the government shutdown.

Lawmakers of the current Congress are expected to meet one last time on Wednesday, before the new session begins Thursday.

Senators are set to weigh from 4:00 pm (2100 GMT) a bill passed by the House that provides $5 billion in funding for the wall. But the text has no chance of passing the Senate, where a budgetary law requires 60 votes. Republicans only hold 51 seats.

Senate Republican Leader Mitch McConnell said he would now wait until he is certain to have a bill in hand that would pass both houses of Congress and receive Trump's support before submitting it to a vote, a possibility that now seems all too distant.