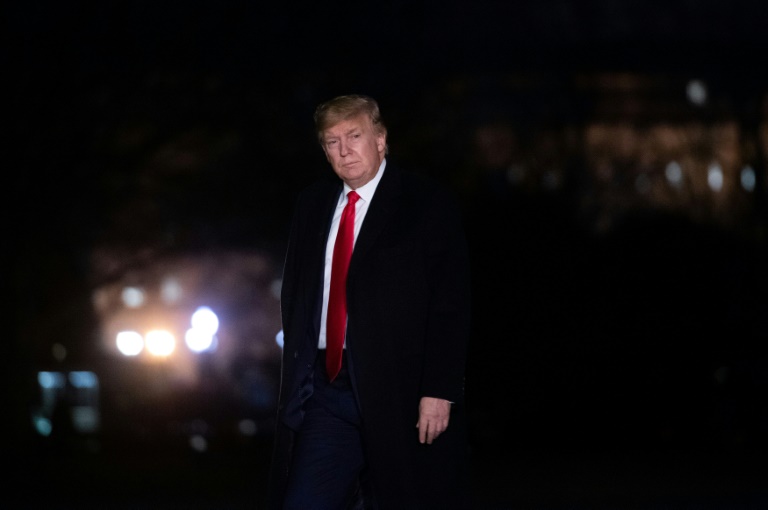 US President Donald Trump returned from Davos, Switzerland while the Senate heard arguments in his impeachment trial. (Photo: AFP)

Democrats on Wednesday accused Donald Trump at his historic Senate impeachment trial of seeking to cheat to ensure re-election in November, and called for "courage" by the president's fellow Republicans while considering the case against him.

Adam Schiff, head of the House of Representatives' prosecution team, took to the Senate floor to deliver hours of methodical arguments to a hushed chamber hearing only the third-ever impeachment trial of a US president.

The Democratic lawmaker described how Trump solicited foreign interference in domestic elections, "abusing the powers of his office to seek help from abroad to improve his re-election prospects at home."

"And when he was caught, he used the powers of that office to obstruct the investigation into his own misconduct," said Schiff, who headed the probe that led to Trump's December 18 impeachment by the Democratic-controlled House.

Schiff shrugged off Republican arguments that American voters, and not the Senate, should decide whether Trump remains in the White House.

"The president's misconduct cannot be decided at the ballot box for we cannot be assured that the vote will be fairly won," Schiff said.

Trump stands accused of withholding military aid from Ukraine to pressure his Ukrainian counterpart to announce an investigation into Democrat and potential election rival Joe Biden.

"President Trump withheld hundreds of millions of dollars in military aid to a strategic partner at war with Russia to secure foreign help with his re-election," Schiff said at the nationally televised proceedings.

"In other words, to cheat. If this conduct is not impeachable, then nothing is."

Interspersing his remarks with video of House inquiry testimony, and clips of Trump himself, Schiff appealed to the Senate's 100 members to put aside partisanship in deciding Trump's fate.

He encouraged them to use an open mind when evaluating the testimony of people like ambassadors Gordon Sondland and Marie Yovanovitch, and former National Security Council official Fiona Hill.

"They risked everything, their careers. And yes I know what you're asked to decide may risk yours too," Schiff told the senators.

"But if they could show the courage, so can we," he said in concluding a nearly-nine-hour session.

Republicans, who hold a 53-47 edge, have shown little inclination, however, to break ranks with a president who has a history of lashing out ferociously at his perceived enemies.

"I didn't hear anything new at all," Republican Senator John Barrasso said during a trial break.

Sixty-seven senators, a two-thirds majority, are needed to remove Trump from office and a series of votes Tuesday on the trial's ground rules followed strict party lines.

Republicans defeated repeated efforts by Democrats to introduce White House witnesses and documents at the start of the trial.

Trump called the proceedings a "hoax" and said he expected the Senate to clear him "fairly quickly."

The president defended the Republicans' rejection of Democratic efforts to force former national security advisor John Bolton and others to testify, saying of Bolton, for example, that it would present a "national security problem."

Trump then went on a Twitter tear, firing off a record number of tweets and retweets in a single day of his presidency -- 150 as of 10:30 pm.

With reports swirling that some Democrats were mulling pushing for Biden or his son Hunter to testify in exchange for key administration officials being called as witnesses, the top Democrat waived it off.

Hunter Biden served on the board of a Ukrainian energy company when his father was vice president.

But a witness trade is "off the table," Senate Minority Leader Chuck Schumer said.

House impeachment "managers" -- the prosecutors -- have 24 hours over three days to make their case that Trump is guilty of abuse of power and obstruction of Congress.

Thursday's session focuses on the legal and constitutional case for impeachment, while Friday will address facts surrounding the president's misconduct, Schiff said.

White House lawyers then have 24 hours, likely beginning Saturday, to present their defense.

Senators will then be able to ask written questions to be read out aloud by US Supreme Court Chief Justice John Roberts, who is presiding over the trial.

And despite Schiff's appeal to Republican senators to support calling key witnesses, Sekulow gave a curt rationale for refusal.

"The Constitution protects executive privilege. There's a reason for that," he told reporters.

The next few days are likely to be an endurance test for senators, 14 of whom are 75 or older.

Senators are barred from having electronics at their desks and they have spent their time chatting quietly or scribbling on notepads when not listening intently.

But the absence of smartphones may lead lawmakers, including a handful of more moderate Republicans facing tough re-election fights this year, to focus on the arguments and evidence presented.

Schiff's delivery earned scorn from some Republicans, but many legal experts and analysts lauded his performance.