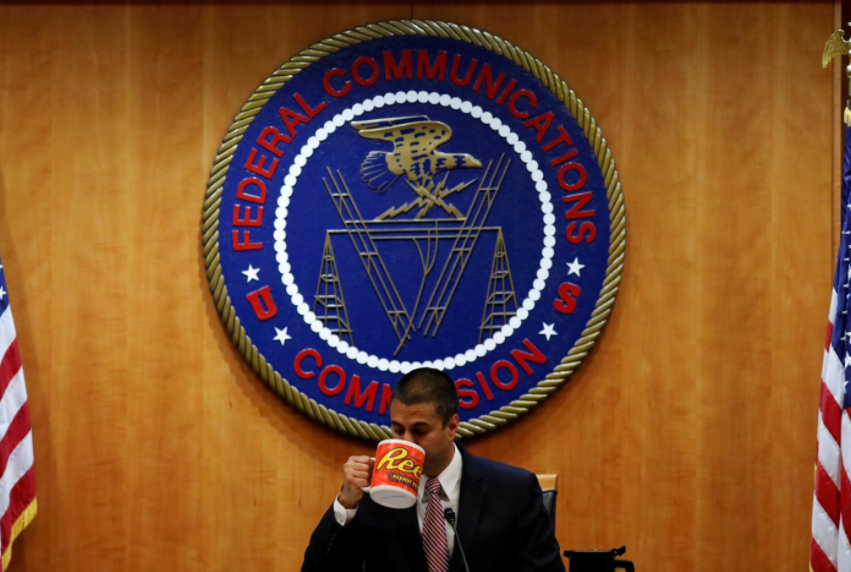 Chairman Ajit Pai drinks coffee ahead of the vote on the repeal of so called net neutrality rules at the Federal Communications Commission in Washington. Photo: REUTERS/Aaron P. Bernstein

US Senate Democrats said on Tuesday they will force a vote later this year on the US Federal Communications Commission’s reversal of landmark Obama administration net neutrality rules and will try to make it a key issue in the 2018 congressional elections.

Senate Democratic Leader Chuck Schumer said the issue will be a major motivating factor for young voters the party is courting. “We’re going to let everyone know where we stand and they stand,” Schumer said at a Capitol Hill news conference in Washington.

Democrats picked up a key vote when Republican Senator Susan Collins said on Tuesday she would back the effort to overturn the FCC’s recent move. “She believes that a careful, deliberative process involving experts and the public is warranted to ensure that consumers have strong protections that guarantee consumer choice, free markets, and continued growth,” a spokeswoman for Collins said.

The FCC voted in December along party lines to reverse rules introduced in 2015 that barred internet service providers from blocking or throttling traffic, or offering paid fast lanes. A group of state attorneys general immediately vowed to sue.

The vote in December marked a victory for AT&T Inc, Comcast Corp and Verizon Communications Inc and hands them power over what content consumers can access over the internet. It was the biggest win for FCC Chairman Ajit Pai in his sweeping effort to undo many telecommunications regulations.

Senate Democrats on Tuesday called the FCC decision “un-American” and an “all-out assault on consumers.”

Senate Majority Leader Mitch McConnell, a Republican, backs the FCC repeal. A reversal of the FCC vote would need the approval of the Senate, US House and President Donald Trump. Trump also backed the FCC action, the White House said last month.

The FCC order grants internet providers sweeping new powers to block, throttle or discriminate among internet content, but requires public disclosure of those practices. Internet providers have vowed not to change how consumers obtain online content.

Democrats say net neutrality is essential to protect consumers, while Republicans say the rules hindered investment by providers and were not needed.

Democratic Senator Ed Markey said on Tuesday he had 39 co-sponsors to force a vote, but it is not clear when the vote will occur since the new rules will not take effect for at least another three months. “There will be a political price to pay for those who are on the wrong side of history,” Markey said.

Republicans control the Senate with 51 votes out of the 100-member body, so Democrats would need at least one more Republican to back overturning the FCC action.

Senator Brian Schatz, a Hawaii Democrat, said the issue was resonating with teenagers and college students. “People are mobilizing across the country to save the free and open internet,” he said.