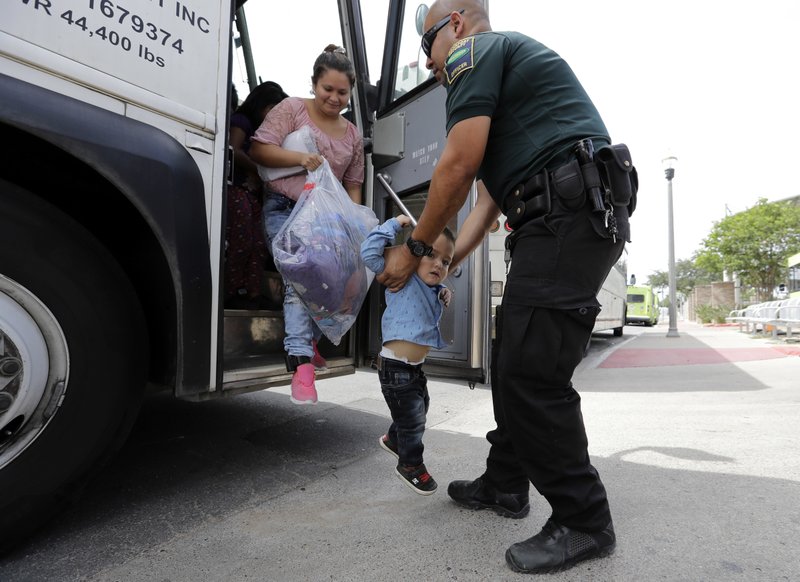 More than 200 protesters opposed to President Donald Trump’s immigration policies blocked a busy road Monday near where Attorney General Jeff Sessions was scheduled to speak at a school-safety conference.

The coalition of civil rights, religious and union activists staged the demonstration outside a hotel-casino in downtown Reno. Several people held a banner saying “No human is illegal” to call attention to the separation of children and families at the US-Mexico border.

The protesters chanted, “Jeff Sessions, you can’t hide. Reno sees your ugly side!” Several carried signs that read “Children are not political” and “Impeach the mad king.”

At least a half-dozen people wearing red arm bands said they intended to get arrested.

The Rev. Karen Foster of the Unitarian Universalist Fellowship said American children are taught to pledge allegiance to the flag “with liberty and justice for all.” She said “there is no justice for thousands of children locked in cages” at the border.

Meanwhile, a congressman said he was turned away from trying to meet with detainees from the southern border crisis because of a chicken pox outbreak at a federal prison in Tacoma, Washington.

Democratic Rep. Derek Kilmer went to the Northwest Detention Center on Saturday after hearing that a number of migrants who were separated from their children had been transferred there from another federal prison in the area.

Kilmer told the Tacoma News Tribune that he had tours scheduled at both facilities, but they were canceled due to protest-related safety concerns.

When the congressman tried to visit three detainees during regularly scheduled visiting hours on Saturday, he was told that they were all quarantined due to chicken pox exposure.

On Sunday, more than 30 immigrant parents separated from their children after crossing the US-Mexico border were freed into the care of a Texas charitable organization, the group said, but the parents don’t know where their kids are or when they might see them again.

The release was believed to be the first, large one of its kind since Trump signed an executive order that preserved a “zero-tolerance” policy for entering the country illegally but ended the practice of separating immigrant parents and children.

Ruben Garcia, director of Annunciation House in El Paso, said the group includes mothers and fathers from Mexico, Guatemala and Honduras who came to his group after authorities withdrew criminal charges for illegal entry.

Garcia would not provide names or personal details of the parents, and reporters could not speak with them. Department of Homeland Security officials said they could not check the veracity of the claims without more specific identifying information.

Homeland Security officials have said authorities know the location of all children in custody and were working to reunite them. The agency called the reunification process “well-coordinated.”

A fact sheet issued by the agency over the weekend also said parents must request that their child be deported with them. In the past, the sheet said, many parents elected to be deported without their children. That may be a reflection of violence or persecution they face in their home countries.

The exact process to reunite families has been unclear because migrants are first stopped by Customs and Border Patrol, with children taken into custody by the Department of Health and Human Services and adults detained through Immigration and Customs Enforcement, which is under the Department of Homeland Security. Children have been sent to far-flung shelters around the country, raising alarm that parents might never know where their children can be found.

Officials have said as many as 2,300 children had been separated from the time the policy began until June 9. At least 2,053 minors who were separated at the border were being cared for in HHS-funded facilities, the fact sheet said.

The chairman of the Senate Homeland Security Committee hedged Sunday when pressed on whether he was confident the Trump administration knows where all the children are and will be able to reunite them with their parents.

“That is what they’re claiming,” Sen. Ron Johnson, a Wisconsin Republican, said on CNN’s “State of the Union.”

As part of the effort, ICE officials have posted notices in all its facilities advising detained parents who are trying to find or communicate with their children to call a hotline.

A parent or guardian trying to determine if a child is in the custody of HHS should contact the Office of Refugee Resettlement National Call Center at 1-800-203-7001, or via email at information@ORRNCC.com. Information will be collected and sent to an HHS-funded facility where a minor is located.

But it’s unclear whether detained parents have access to computers to send an email, or how their phone systems work to call out. Attorneys at the border have said they have been frantically trying to locate information about the children on behalf of their clients.

The administration’s “zero-tolerance policy” of criminally prosecuting anyone caught illegally crossing the border remains in effect, officials have said, despite confusion on the ground on how to carry out Trump’s order.

Justice Department officials asked a federal judge to amend a class-action settlement that governs how children are treated in immigration custody. Right now, children can only be detained with their families for 20 days. Trump officials are seeking to detain them together indefinitely as their cases progress. Advocates say family detention does not solve the problem.