Some of the most influential forces in Democratic politics revolted Monday against former Starbucks CEO Howard Schultz's prospective presidential bid, insisting that an independent run would unintentionally help US President Donald Trump win another four years in office. 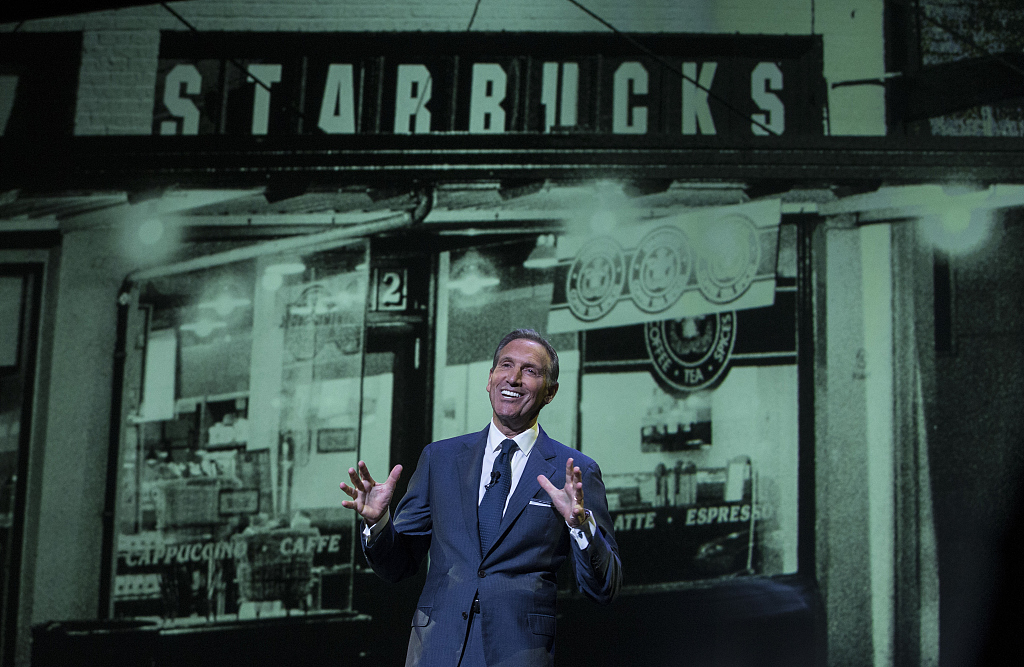 The critics included the Democratic chairman of Schultz's home state, another billionaire businessman who long flirted with an independent run of his own, former President Barack Obama's chief strategist, and the most powerful super PAC in Democratic politics.

"If Schultz entered the race as an independent, we would consider him a target... We would do everything we can to ensure that his candidacy is unsuccessful," said Patrick McHugh, executive director of Priorities USA, which spent nearly $200 million in the 2016 presidential contest.

Specifically, he seized on Schultz's apparent willingness to cut entitlement programs such as Medicare and Social Security to narrow the federal deficit.

"The bottom line," McHugh said, "is that I don't think Americans are looking for another selfish billionaire to enter the race."

The intense pushback in the early days of the 2020 campaign reflects the passion Democrats are bringing to the race to deny Trump a second term. Rank-and-file voters and party officials alike are anxious about any hurdle that would prevent them from seizing on Trump's unpopularity.

While no independent has won the presidency since George Washington, Democrats fear that Schultz would almost certainly split their vote and give Trump an easier path to re-election. Yet Democrats concede that they had few tools to dissuade Schultz from launching an independent campaign — as he told CBS' "60 Minutes" on Sunday he was considering — though many were skeptical that he would actually follow through.

Schultz felt the passion of the anti-Trump resistance moments after he took the stage Monday evening in New York City to promote his new book.

"Don't help elect Trump, you egotistical billionaire!" a protester shouted before being ejected by security.

The mood was tense for the rest of his question-and-answer session in the Manhattan Barnes & Noble as the packed audience applauded at times both for Schultz's insistence he could win the presidency if he ran and suggestions that he couldn't.

"If I decide to run for president as an independent," Schultz told his interviewer, "I will have the courage and conviction to believe I can win."

Asked if there was anything Democrats could do to convince him not to run, he responded simply, "No."

Shultz plans to spend the next month traveling around the country — in part promoting a new book — to test whether there's interest in an independent presidential candidate, according to a person familiar with his planning. However, the former Starbucks CEO may not make a final decision on running until the fall, when the direction of the Democratic primary may be somewhat clearer.

Schultz's team has polled on the viability of a third party run and believes there is an opening, though they have not shared the specifics of their internal surveys.

Schultz is being advised by a team with experience in both parties, including Steve Schmidt, who worked on Republican John McCain's 2008 presidential campaign, and former Obama adviser Bill Burton, who joined Schultz at his Monday appearance in New York.

Schultz has discussed with his team how much of his own money he's willing to plunge into a campaign, though the person familiar with his planning would not disclose the amount. That person insisted on anonymity in order to discuss Schultz's private conversations.

Yet history — and the reality of a political system designed to favor major party candidates — suggests that Schultz may do little more than play spoiler should he decide to run. Bloomberg, who studied the possibility of an independent run of his own in the past, offered Schultz a direct message based on his own experience.

"The data was very clear and very consistent. Given the strong pull of partisanship and the realities of the electoral college system, there is no way an independent can win. That is truer today than ever before," Bloomberg, who is considering a Democratic 2020 bid, said in a statement.

He continued: "In 2020, the great likelihood is that an independent would just split the anti-Trump vote and end up re-electing the president. That's a risk I refused to run in 2016 and we can't afford to run it now."

The angry voices were far and wide, and they included Obama's former chief strategist, David Axelrod, along with Democrats from Schultz's home state.

"If Schultz decides to run as an independent," Axelrod tweeted, Trump "should give Starbucks their Trump Tower space rent free! It would be a gift."

Tina Podlodowski, the Democratic chairwoman in Washington state, where Schultz has lived for decades, discouraged him from running as an independent.

"A billionaire buying his way out of the entire primary process does not strengthen democracy," she said. "It only makes it more likely that our democracy will be further strained under another four years of President Donald Trump."

Perhaps trying to elevate Schultz, who is not well known among Democratic primary voters, Trump himself weighed in on Monday, tweeting that Schultz "doesn't have the 'guts' to run for President!"

The 65-year-old Seattle billionaire launched a tour Monday to promote his latest book, "From the Ground Up: A Journey to Reimagine the Promise of America." After New York, he has stops this week in Tempe, Arizona; Seattle; and San Francisco — but no dates listed for the early voting states of Iowa or New Hampshire.

On paper, Schultz offers a number of qualities that might appeal to voters. He grew up in public housing in New York City's Brooklyn borough and became the first person in his family to graduate from college.

He's also been a longtime Democratic donor, contributing to the campaigns of Obama, Hillary Clinton, New York Sen. Chuck Schumer, and Washington Sens. Patty Murray and Maria Cantwell, among others. He has also criticized Trump, telling employees that the president was creating "chaos" and hurting business; calling Trump's tax cuts for corporations unnecessary and reckless; and vowing to hire 10,000 refugees after Trump issued an executive order banning travel from seven mostly Muslim nations.

But some of his views might clash with a Democratic Party gearing up to unseat Trump.

Schultz on Monday criticized proposals for single-payer health care and free tuition at public colleges as unrealistic and instead emphasized expanding the economy and curbing entitlements to get the national debt under control.

"If I ran as a Democrat I would have to say things in my heart I do not believe," he said of the increasingly popular liberal policies.

The Democratic National Committee declined to address Schultz directly. Spokeswoman Xochitl Hinojosa offered only this response: "We are focused on defeating Donald Trump, and anyone who shares that goal should vote for the Democrat nominee in 2020."