WORLD Dems joust with Pompeo at hearing, the 1st since impeachment

Dems joust with Pompeo at hearing, the 1st since impeachment 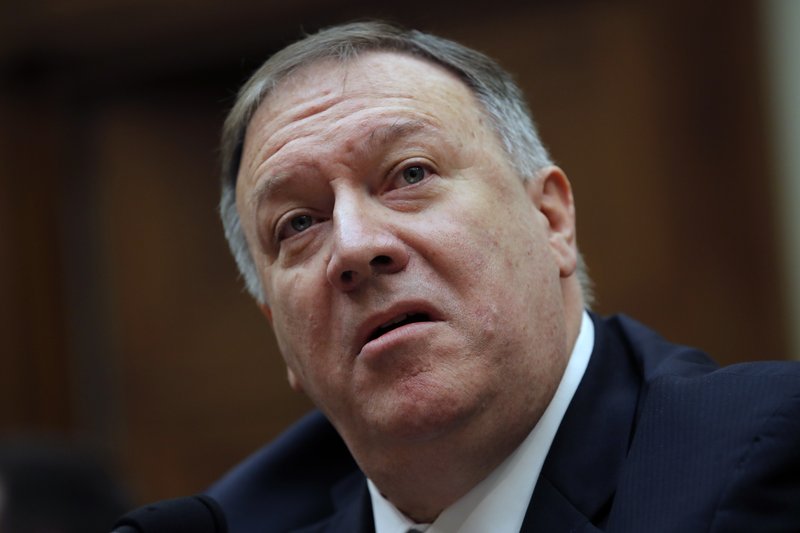 Secretary of State Mike Pompeo testifies during a House Foreign Affairs Committee hearing on Capitol Hill in Washington, Friday, Feb. 28, 2020, about the Trump administration's policies on Iran, Iraq and the use of force. (Photo: AP)

Secretary of State Mike Pompeo defended the Trump administration’s response to the spreading coronavirus but also faced contentious questions from Democrats about the basis for an airstrike that killed Iran’s most powerful general and whether the attack had put American security at risk.

Democrats on the House Foreign Affairs Committee repeatedly expressed frustration that the panel was afforded only two hours to question Pompeo, who until Friday had gone months without testifying publicly on Capitol Hill. He balked last fall at complying with a subpoena tied to the House impeachment inquiry into the administration’s interactions with Ukraine.

“Mr. Secretary, it shouldn’t have been so difficult to get you here, and your appearance here today is far too short,” Democratic Rep. Eliot Engel of New York, the committee’s chairman, said at the outset of the hearing. He later called it an “embarrassment” that the hearing was so short.

Minutes later, Rep. Gregory Meeks, a New York Democrat, recalled Pompeo’s “thundering” while in Congress about the need for testimony from one of his Democratic predecessors, Hillary Clinton, about the 2012 attacks on the American embassy in Benghazi.

“’But with you ,sir, we had to move heaven and earth to get you here today for just two hours,” Meeks said. “To me that shows disregard for the oversight responsibilities of the United States Congress.

Pompeo, a close ally of President Donald Trump, noted that he had briefed Congress more than 70 times on the administration’s dealings with Iran and sought to keep his testimony focused on that subject — the stated focus of the hearing.

He repeatedly defended the administration’s January strike against Gen. Qassen Soleimani, the head of Iran’s elite Quds force, saying he was “100 percent” confident that the military commander had plans to kill more Americans and was “actively plotting” to do so.

“His death reduced the risk to our personnel overseas, both my diplomats and our military, and made clear that we are willing and able to impose costs on our adversaries if they threaten or attack us,” Pompeo said.

Republicans defended the strike, with Rep. Adam Kinzinger of Illinois describing Soleimani as a “demon” and Rep. Brian Mast of Florida challenging Democrats on the committee to say they’d have preferred that the general was alive rather than dead. But Democrats were skeptical of Pompeo’s arguments, with Rep. Andy Levin of Michigan at one point showing Pompeo a blank map and asking him to pinpoint the embassies that were under threat of attack before Soleimani’s death.

Pompeo also defended the administration’s response to the coronavirus, saying he was “incredibly proud” of the work the State Department had done in getting American civilians and diplomats out of China, where the illness first surfaced. He also said the administration had been in touch with Iran, where new cases have been reported, and is prepared to help with medical and technical help.

“I am confident that this administration has taken actions that have significantly reduced risk, and will continue to do so,” Pompeo said.

The COVID-19 illness caused by a new coronavirus that emerged in December in the Chinese city of Wuhan has stretched well beyond Asia. The global count of those infected as of Friday exceeds 83,000, with China still by far the hardest-hit country. Dozens of cases but no deaths have been confirmed in the United States.

Pompeo’s testimony comes three weeks after the conclusion of the Senate impeachment trial against Trump, who was accused of abusing his office by withholding aid from Ukraine while he was seeking an investigation into Democratic rival Joe Biden. Trump, who denied doing anything wrong, was acquitted by the Republican-led Senate.

The inquiry before House lawmakers featured the testimony of several foreign service officers, including some who’d been enlisted with trying to carry out the Republican president’s wishes and expressed concerns over it.

Though Pompeo sought to distance himself from the impeachment inquiry and the circumstances surrounding it, he has also faced criticism from some who felt that he had not done enough to support them during the controversy.

Marie Yovanovitch, the former US ambassador to Ukraine who was ousted last spring after a push by the president’s allies, has said she felt threatened by comments about her from Trump.