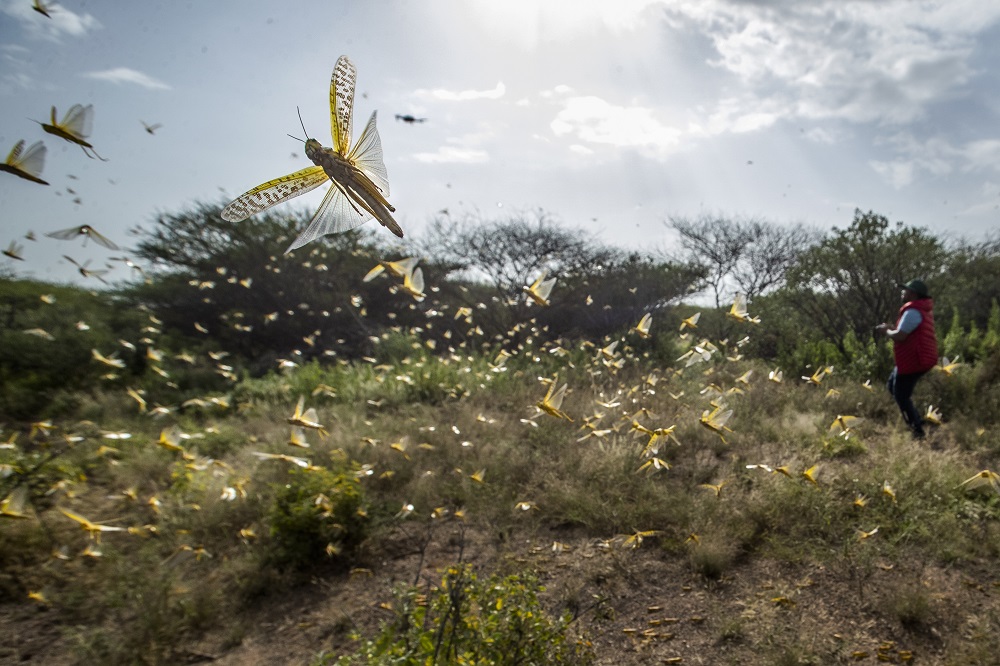 Bright Rwamirama, minister of state for agriculture told reporters here that the affected districts are in the northeastern, northern and northwestern part of the country.

He said more locusts are expected to migrate into the east African country from neighboring Kenya where they have caused havoc destroying vegetation.

The minister said the current swarms have been classified as mature adults that may not have much longer to live after laying eggs.

"The existing swarms have not caused significant damage to our vegetation cover, however, there is an eminent threat to food security following a possible outbreak," Rwamirama said.

"It is worth noting that a female locust lays at least 300 eggs in one sitting and will lay eggs three times in its lifecycle. The nymphs and the immature adult Desert Locusts (mainly pink in color) that will emerge after the first hatching are the most dangerous since they have a high need for food," he added.

Rwamirama said Uganda and Kenya have agreed to a joint cross border aerial spraying as one of the measures to kill the locusts.

He said the aircraft would be stationed both on the Ugandan and Kenyan side.

The aerial spraying is expected to start on Friday following the procurement and shipment of the pesticides, according to the minister.

"They (aircraft) have been cleared. We have a clearance certificate to fly across," he said, noting that if there is more need on one side, the planes would move there.

"We are operating jointly. The locusts don't know boundaries. They are trans-boundary. They will cross when they need to cross," he said.

At least over 2,000 army and civilian personnel have already been deployed in the northeastern part of the country to hunt down the locusts.

Uganda last experienced a major locust invasion 70 years ago, which caused immense damage on crops, according to the agriculture ministry.

According to the United Nations Food and Agriculture Organization, the desert locust is considered as the most destructive migratory pest in the world and a small swarm covering one square kilometer can eat the same amount of food in one day as 35,000 people.