WORLD Despite differences, Spain gets its new coalition government

Despite differences, Spain gets its new coalition government 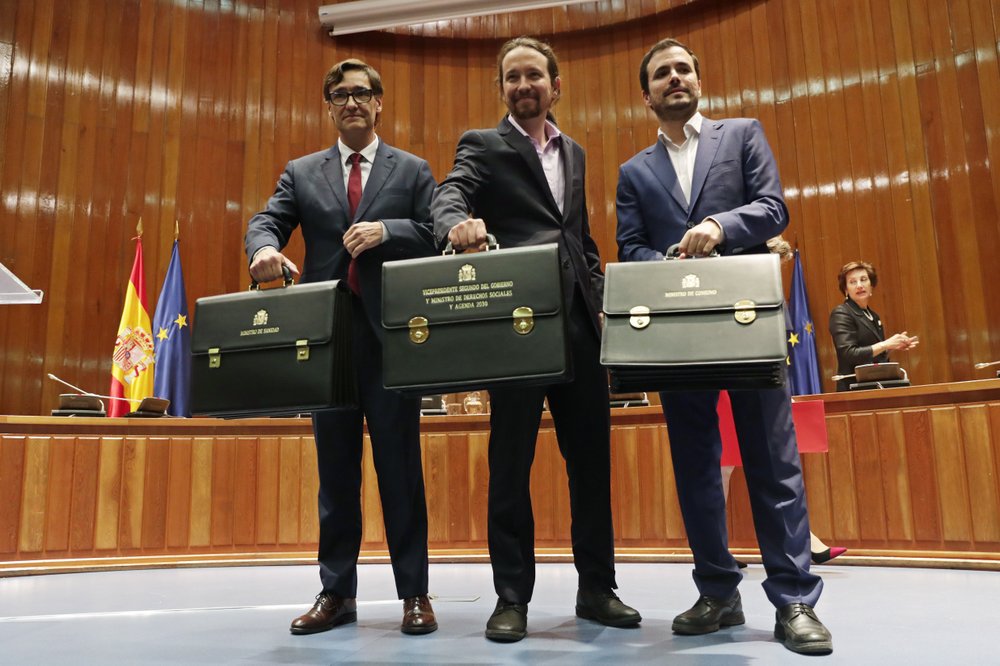 Spain’s first coalition government in the four decades since the return of democracy took shape Monday as 22 Cabinet ministers took their oaths of office.

Questions though remained as to whether the government of two left-wing parties can see out its four-year term as it is a minority administration and confronts an array of vexing issues that could lead to tensions within the coalition.

Beyond handling separatist tensions in the economically powerful northeastern region of Catalonia and recharging what is the fourth-largest economy in the eurozone, Socialist Prime Minister Pedro Sánchez has a tricky task in maintaining the support of his coalition partner, Pablo Iglesias, the leader of the anti-austerity United We Can party.

“Either they cooperate or they will open the door to a right-wing coalition supported by the far-right,” said Ana Sofía Cardenal, a political science lecturer with Catalonia’s UOC university. “A failure of the coalition would dent the credibility of United We Can and damage the reputation of the Socialists.”

Catalonia is, by far, the biggest immediate problem — and one that will demand unity within the government.

Sánchez secured his government last week by two votes, the slimmest majority of any Spanish prime minister in recent decades. He did it thanks to the abstention of 13 members of the pro-Catalan independence ERC party on the promise that he would sit and talk with them about how to resolve Spain’s most serious internal issue since the return to democracy in 1978.

The ERC, which has several leading members jailed for an illegal independence push in 2017, insists on self-determination for Catalonia, something the Spanish Constitution and Sánchez rule out.

What the Socialists can legally offer to keep the ERC from voting against the government is still unknown.

On the economic front, Spain is still among Europe’s healthy economies, with the growth of around 2% in 2019.

The government’s chief problem is getting a budget through that will satisfy the European Union, investors as well as fulfilling the social promises it has been made, from raising pensions to increasing civil servants’ wages and the basic minimum wage.

And while Spain has reduced unemployment by around a half over the past few years, at 14% it’s still double the average across the 19-country eurozone.

Sánchez will be mindful that his first attempt at government last year collapsed when the ERC voted down his 2019 spending plan.

Sánchez and his chief aides will also have a challenge in maintaining the relationship with United We Can, an upstart party that has got many of its votes from the 140-year-old socialists.

When the two parties failed in their first attempt to form a coalition, Sánchez said that neither he nor 95% of Spaniards would be able to sleep at night having Iglesias and his inexperienced colleagues in charge of important ministries. But five months later, Sánchez took many by surprise when days after the Nov. 10 general election he embraced Iglesias on signing a coalition deal.

Both parties lost seats in the last election and possibly sensed that a further slide could see a right-wing government take power in Madrid.

A major sticking point could be Iglesias’ support for a referendum in Catalonia. Curtailing abusive house rents and accommodating more migrants are two other demands the Socialists may find hard to meet.

On Monday, Iglesias said he was behind Sánchez’s goal of “a government that speaks with many voices but always with the same message.”