WORLD Despite furor over Jerusalem move, Saudis seen on board with US peace efforts

Despite furor over Jerusalem move, Saudis seen on board with US peace efforts 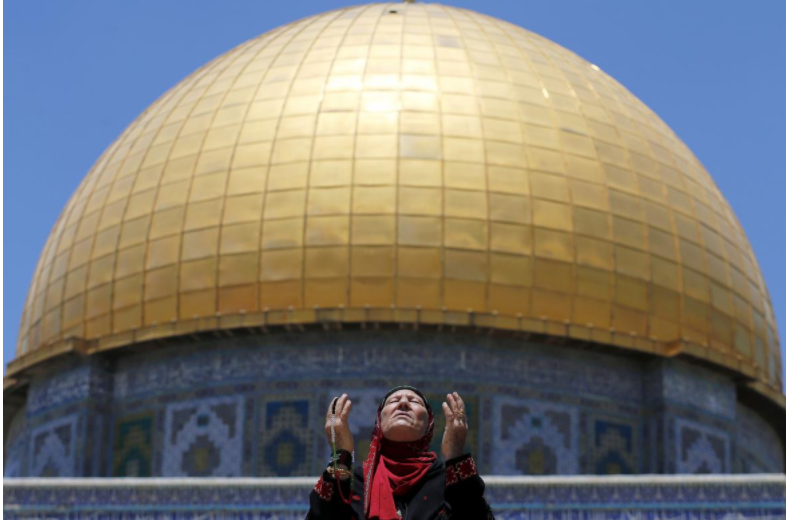 A Palestinian woman prays in front of the Dome of the Rock on the first Friday of the holy month of Ramadan in Jerusalem's Old City June 19, 2015. Photo: REUTERS/Ammar Awad

Saudi Arabia pulled no punches when it condemned President Donald Trump’s move to recognize Jerusalem as the capital of Israel. But Palestinian officials say Riyadh has also been working for weeks behind the scenes to press them to support a nascent US peace plan.

Trump reversed decades of US policy on Wednesday with his announcement and instructions to begin the process of moving the embassy in Tel Aviv to Jerusalem, despite warnings that it would drive the wedge between Israel and the Palestinians deeper.

The Saudi royal court described the decision as “unjustified and irresponsible” and “a big step back in efforts to advance the peace process.”

But Arab officials privately say that Riyadh appears to be on board with a broader US strategy for an Israeli-Palestinian peace plan still in its early phases of development.

Four Palestinian officials, who spoke on condition they not be named, said Saudi Crown Prince Mohammed bin Salman and Palestinian President Mahmoud Abbas discussed in detail a grand bargain that Trump and Jared Kushner, the president’s son-in-law and adviser, are expected to unveil in the first half of 2018.

One official said Prince Mohammed asked Abbas to show support for the US administration’s peace efforts when the two met in Riyadh in November.

Another Palestinian official said Prince Mohammed told Abbas: “Be patient, you will hear good news. This peace process will go ahead.”

The US-Saudi relationship has improved dramatically under Trump, partly because the leaders share a vision of confronting Riyadh’s arch-rival Iran more aggressively in the region.

Kushner, 36, whose father knew Israeli leader Benjamin Netanyahu, has also nurtured strong personal ties with the 32-year-old crown prince as he asserts Saudi influence internationally and amasses power for himself at home.

The Saudi royal court did not respond to requests for comment. A White House official said Kushner did not ask the crown prince to talk to Abbas about the plan.

Palestinian officials fear, and many Arab officials suspect, that by closing the door on East Jerusalem as the future capital of a Palestinian state, Trump will align with Israel in offering the Palestinians limited self-government inside disconnected patches of the occupied West Bank, with no right of return for refugees displaced by the Arab-Israeli wars of 1948 and 1967.

The Palestinian officials said they were concerned that the proposal that Prince Mohammed communicated to Abbas, which purportedly came from Kushner, presents exactly that scenario.

As told to Abbas, the proposal included establishing “a Palestinian entity” in Gaza as well as the West Bank administrative areas A and B and 10 percent of area C, which contains Jewish settlements, a third Palestinian official said.

Jewish settlements in the West Bank would stay, there would be no right of return, and Israel would remain responsible for the borders, he said.

The proposal appears to differ little from existing arrangements in the West Bank, widening Palestinian control but falling far short of their minimum national demands.

“This is rejected by Palestinians. Abu Mazen (Abbas) explained the position and its danger to the Palestinian cause and Saudi Arabia understood that,” the official said.

The White House official denied that Kushner communicated those details to Prince Mohammed: “It does not accurately reflect any part of the conversation.” 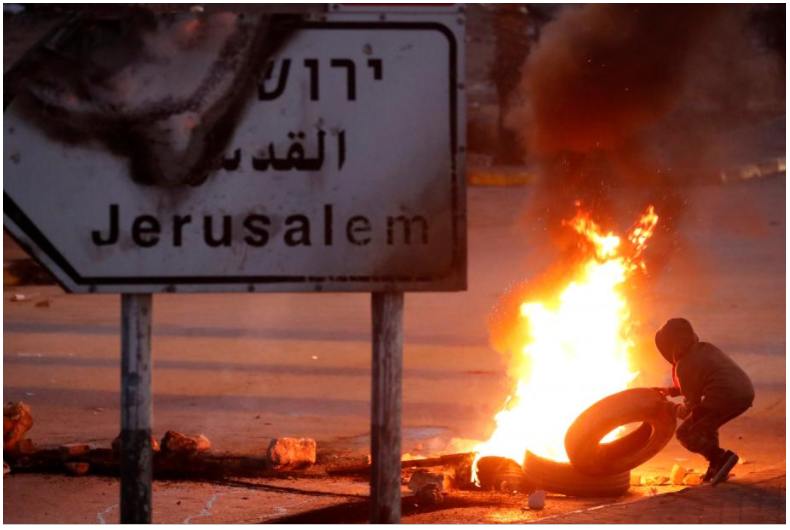 A Palestinian protester sets up a burning barricade near the West Bank city of Ramallah December 8, 2017. Photo: REUTERS/Goran Tomasevic

Trump sought to temper the blow from his Jerusalem announcement with a phone call to Abbas on Tuesday, stressing that the Palestinians stood to gain from the plan being drawn up by Kushner and US Middle East envoy Jason Greenblatt.

“President Trump in a phone call told Abu Mazen: ‘I will have some proposals for you that you would like’. When Abu Mazen pressed him on details, Trump didn’t give any,” the first Palestinian official said.

A Saudi source said he believed an understanding on Israeli-Palestinian peace would nonetheless begin to emerge in the coming weeks.

“Do not underestimate the businessman in (Trump). He has always called it the ultimate deal,” the source said, declining to be named because of the sensitivity of the subject.

“I don’t think our government is going to accept that unless it has something sweetened in the pipeline which (King Salman and the crown prince) could sell to the Arab world – that the Palestinians would have their own state.”

Trump’s decision on Jerusalem is seen almost uniformly in Arab capitals as a sharp tilt toward Israel, which has only signed peace deals with Egypt and Jordan.

Jordan, a US ally which has played a key role in the peace process since inking its bilateral deal with Israel in 1994, insists that no peace can be achieved without Jerusalem.

Jordanian political analyst Oraib Rantawi, who spoke with King Abdullah after the monarch met with top US administration officials last week, said Amman is worried about being bypassed in favor of Saudi Arabia.

“There are direct dealings and a desire to present a deal that is unfair to the Palestinians in return for securing US backing and paving the way for Gulf-Israeli cooperation to confront Iran,” he said.

Most Arab states are unlikely to object to Trump’s announcement because they find themselves more aligned with Israel than ever, particularly on countering Iran, said Shadi Hamid, senior fellow at Brookings Institution in Washington,

“If Saudi officials, including the crown prince himself, were particularly concerned with Jerusalem’s status, they would presumably have used their privileged status as a top Trump ally and lobbied the administration to hold off on such a needlessly toxic move,” he wrote in an article published in The Atlantic.

“It’s unlikely Trump would have followed through if the Saudis had drawn something resembling a red line.”