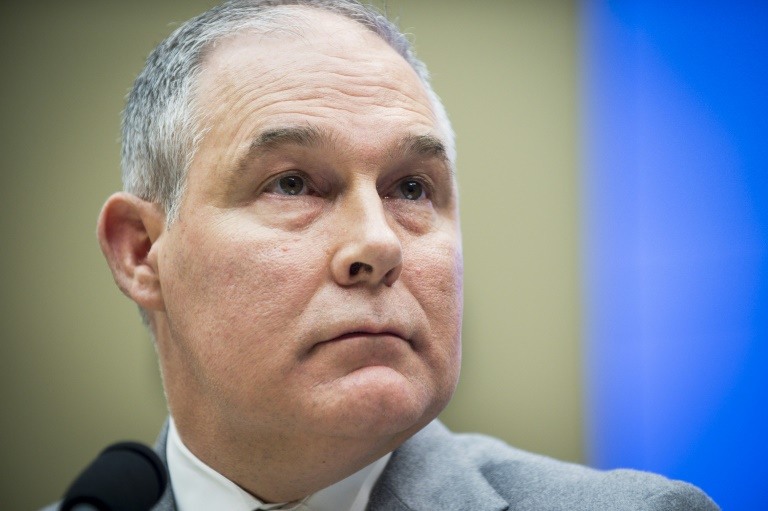 First-class travel with a large security detail, excessive spending and a discount on a condo rental linked to a lobbying firm -- the scandals swirling around Donald Trump's environmental chief keep growing, but the president simply reaffirms his satisfaction with Scott Pruitt.

Named by the president last year to head the Environmental Protection Agency (EPA), Pruitt was charged with carrying out a top Trump priority: dismantling the environmental legacy of his predecessor, Barack Obama.

Having built a reputation in Oklahoma -- where was attorney general -- as a fervent defender of fossil-fuel industries, Pruitt has attacked his new mission with zeal, winning rave reviews from conservative groups but fierce censure from liberals and environmentalists.

Despite the mounting attacks, Trump has continued to defend his appointee -- something he did not do as ardently when his secretaries of veterans' affairs and of health came under fire.

Yet, the list of potential ethical violations facing the EPA administrator has been growing by the week, fueled by revelations in the news media and from Democratic lawmakers.

Pruitt has in fact frequently flown first class, accompanied by a sizable security team -- a necessary precaution, the EPA has maintained, given threats from his detractors.

But that argument lost steam after it was learned that while flying privately at his own expense, Pruitt has traveled economy class.

And critics say his security team is unjustifiably large, involving at least 19 agents and 19 vehicles providing round-the-clock protection, according to CNN.

Democratic senator Sheldon Whitehouse said EPA employees had told him confidentially that Pruitt used as many as 30 security agents during one six-week period.

By comparison, Gina McCarthy, who headed the EPA under Barack Obama, used only a half-dozen bodyguards and traveled alone on weekends.

And Christine Todd, who led the agency under George W. Bush, told CNN that she would walk to work -- on her own.

Pruitt has also been accused of transferring one security agent who refused to use his vehicle's sirens and flashers when the secretary was late for a dinner at a French restaurant.

The EPA chief has also been accused of exorbitant spending, including the installation in his office -- for $43,000 -- of a secure, soundproof communications booth.

At least five other EPA employees who had objected to Pruitt's spending plans, such as to buy a bulletproof sport utility vehicle or to sign up for a $100,000-a-month plan allowing him to travel in a private jet when on official business, were reassigned or demoted, The New York Times reported.

And then there was Pruitt's rental, through a lobbyist, of a Capitol Hill apartment for just $50 a night, an amount local realtors say is considerably below market rates. He was said to have fallen behind on his payments.

Trump, who campaigned on a promise to make Washington run more efficiently, conceded that his environment chief was not exactly frugal.

"While security spending was somewhat more than his predecessor, Scott Pruitt has received death threats because of his bold actions at EPA..." the president tweeted Saturday. "Rent was about market rate, travel expenses OK. Scott is doing a great job!"

But while the presidential tweet may have eased the pressure, Pruitt is not yet in the clear.

Democrats in Congress are revealing damning details, many of them coming from disheartened EPA officials who see Pruitt as the agency's sworn enemy and who are using the protection of a so-called whistleblower law to privately lodge their ethical complaints.

"While I consider matters of personal security to be extremely serious, personal security should never be used as a pretext to obtain special treatment," Senator Whitehouse said in a letter to the EPA inspector general.

Trey Gowdy, a Republican and chairman of the House Oversight and Government Reform Committee, told one environmental activist that he did not have "a lot of patience" with Pruitt's alleged practices.

But Pruitt ultimately has to keep the confidence of only one man -- Trump -- and so far that has not appeared to be a problem.