As wildfires continued to rage on both ends of California, officials released another grim statistic: six more dead in a swath of Northern California wiped out by fire, raising the death toll there to 29. It matched California’s record for deaths in a single fire. 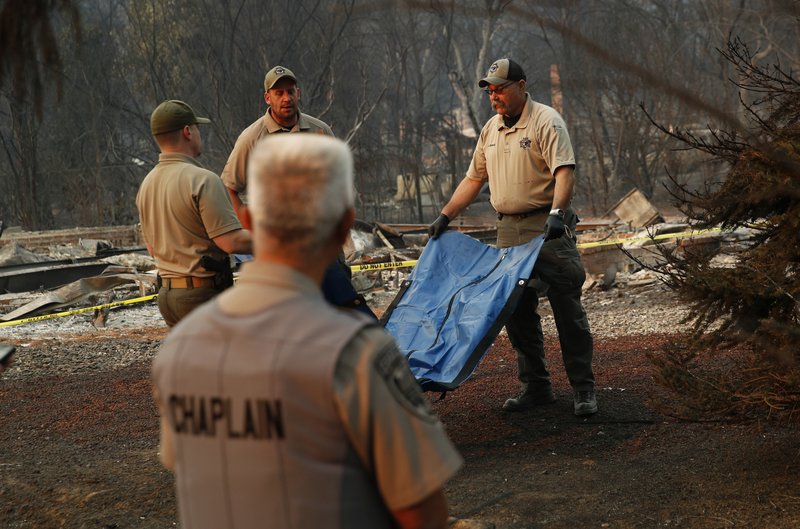 Another 228 remain unaccounted for as crews stepped up the search for bodies and missing people. Two people were killed in a wildfire in Southern California.

Ten search teams were working in Paradise — a town of 27,000 that was largely incinerated last week — and in surrounding communities in the Sierra Nevada foothills. Authorities called in a DNA lab and teams of anthropologists to help identify victims.

“This is truly a tragedy that all Californians can understand and respond to,” Gov. Jerry Brown said at a press briefing. “It’s a time to pull together and work through these tragedies.” 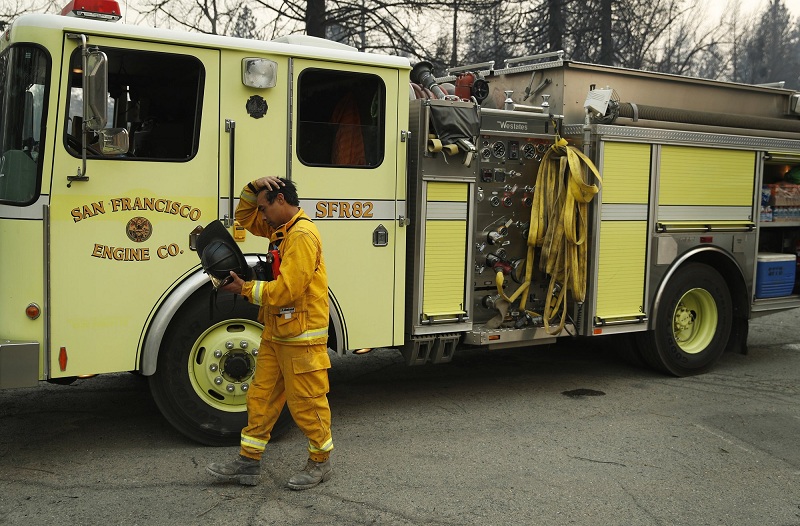 A firefighter rests after helping to find human remains found at a burned out home at the Camp Fire, Sunday, Nov. 11, 2018, in Paradise, Calif.

Brown, who has declared a state emergency, said California is requesting aid from the Trump administration. President Donald Trump has blamed “poor” forest management for the fires. Brown said federal and state governments must do more forest management but that climate change is the greater source of the problem.

“And those who deny that are definitely contributing to the tragedies that we’re now witnessing, and will continue to witness in the coming years,” he said.

Drought and warmer weather attributed to climate change, and the building of homes deeper into forests have led to longer and more destructive wildfire seasons in California. While California officially emerged from a five-year drought last year, much of the northern two-thirds of the state is abnormally dry.

In Southern California , firefighters beat back a new round of winds Sunday and the fire’s growth and destruction are believed to have been largely stopped. Malibu celebrities and mobile-home dwellers in nearby mountains were slowly learning whether their homes had been spared or reduced to ash. Two people were killed and the fire had destroyed nearly 180 structures.

Los Angeles County Fire Chief Daryl Osby stressed there were numerous hotspots and plenty of fuel that had not yet burned, but at sunset he said there had been huge successes despite “a very challenging day.”

Celebrities whose coastal homes were damaged or destroyed in a Southern California wildfire or were forced to flee from the flames expressed sympathy and solidarity with less-famous people hurt worse by the state’s deadly blazes, and gave their gratitude to firefighters who kept them safe. Actor Gerard Butler said on Instagram that his Malibu home was “half-gone,” adding he was “inspired as ever by the courage, spirit and sacrifice of firefighters.”

Flames also besieged Thousand Oaks, the Southern California city in mourning over the massacre of 12 people in a shooting rampage at a country music bar Wednesday night. 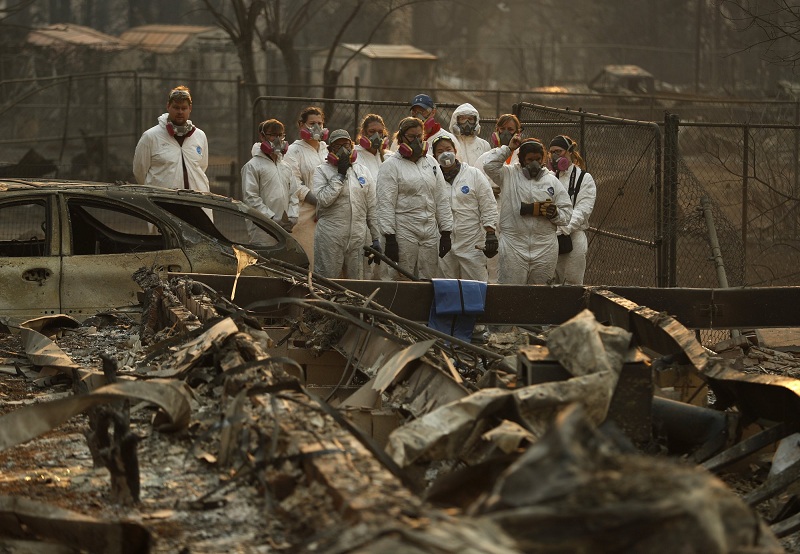 Anthropology students observe as human remains are recovered from a burned out home at the Camp Fire, Sunday, Nov. 11, 2018, in Paradise, Calif.

In Northern California, where more than 6,700 buildings have been destroyed, the scope of the devastation was beginning to set in even as the blaze raged on.

Butte County Sheriff Kory Honea said the county consulted teams of anthropologists because, in some cases, investigators have been able to recover only bones and bone fragments.

In some neighborhoods “it’s very difficult to determine whether or not there may be human remains there,” Honea said.

Public safety officials toured the Paradise area to begin discussing the recovery process. Much of what makes the city function is gone.

“Paradise was literally wiped off the map,” said Tim Aboudara, a representative for International Association of Fire Fighters. He said at least 36 firefighters lost their own homes, most in the Paradise area.

“Anytime you’re a firefighter and your town burns down, there’s a lot of feelings and a lot of guilt and a lot of concern about both what happened and what the future looks like,” he said. “Every story that we’ve heard coming through has been that way, like ‘I wish I could have done more, What’s going to happen to our community, Where are my kids going to go to school?’”

Others continued the desperate search for friends or relatives, calling evacuation centers, hospitals, police and the coroner’s office.

Sol Bechtold drove from shelter to shelter looking for his mother, Joanne Caddy, a 75-year-old widow whose house burned down along with the rest of her neighborhood in Magalia, just north of Paradise. She lived alone and did not drive.

As he drove through the smoke and haze to yet another shelter, he said, “I’m also under a dark emotional cloud. Your mother’s somewhere and you don’t know where she’s at. You don’t know if she’s safe.” 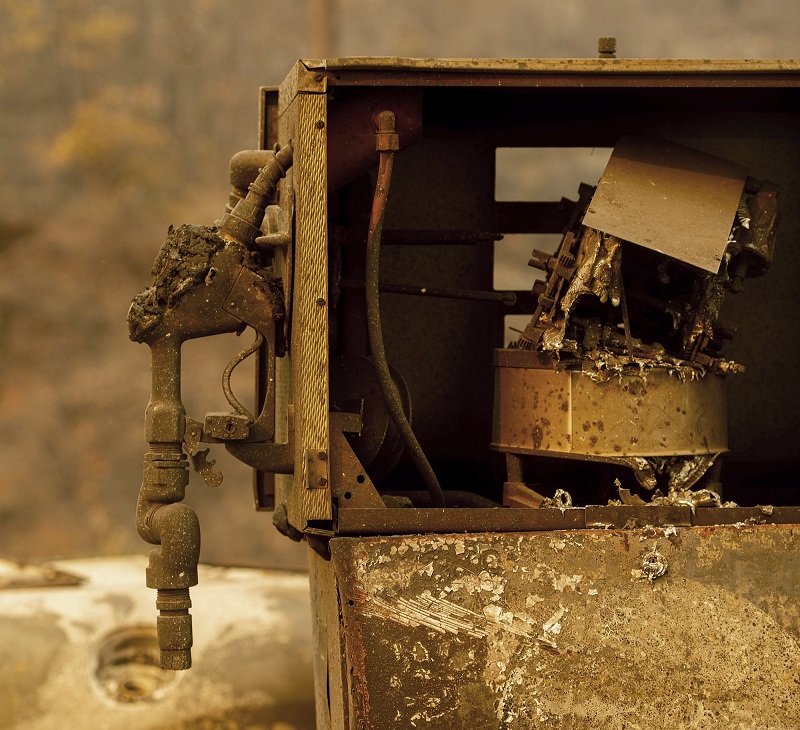 Firefighters made progress against the blaze, holding containment at 25 percent on Sunday, but they were bracing for gusty winds predicted into Monday morning that could spark “explosive fire behavior,” California Department of Forestry and Fire Protection spokesman Bill Murphy said.

Fire officials are bracing for potentially more fires in Southern California’s inland region as high winds and critically dry conditions were expected to persist into next week.

“We are really just in the middle of this protracted weather event, this fire siege,” Cal Fire Chief Ken Pimlott said.

He said officials were moving resources and preparing for “the next set of fires” as winds are expected to pick up. The chief warned that fire conditions will continue until the parched state sees rain.

“We are in this for the long haul,” Pimlott said.