NEW YORK (People's Daily) - The development goals of China and the United States are not mutually exclusive, and the two sides may work with each other well to attain their respective goals, said Chinese State Councilor and Foreign Minister Wang Yi here on Tuesday. 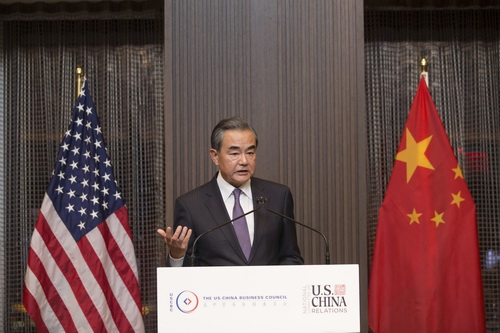 Photo: Ministry of Foreign Affairs of the People's Republic of China

China and the United States both have their own development goals, which are not mutually exclusive or a zero-sum equation, Wang said in a keynote speech at a dinner co-hosted by the National Committee on U.S.-China Relations, the U.S.-China Business Council, the U.S. Chamber of Commerce and the Council on Foreign Relations.

China's renewal will provide the United States with a stable and sustainable market for the long run and a vibrant United States will provide China's development with a better external environment, the state councilor said, when expounding on how the world's two largest economies can benefit from each other's prosperity.

The key is to be open-minded and respect each other's right to development and appreciate each other's accomplishments, he said.

For the sake of the two countries and the world, China and the United States must find a way for major countries with different social systems and cultural backgrounds to co-exist on this planet in peace and cooperate with each other for win-win results, Wang added.

The top diplomat said since China and the United States differ from each other in history, culture, social system, development path and national conditions, it is inevitable for them to have disagreements and even frictions.

However, real harmony is based upon the recognition of and respect for differences, Wang said, adding that differences should not be a chasm that prevents people from engaging with each other, but an impetus to mutual learning and shared progress.

The ups and downs in China-U.S. relations provide ample evidence that confrontation and conflict are not in the fundamental interests of both sides, and dialogue and cooperation are the only way to go, he said.

The Chinese state councilor denounced the claim by some Americans that the  decades-long U.S. engagement policy has failed in its original purpose of changing China and that it is time to revert to a containment policy.

"Such an idea of modeling others according to one's own wish is wrong from the very starting point, and cannot possibly work," he said.

Seventy years on, it is important for the United States to avoid picking another misguided fight with the wrong country, he said.