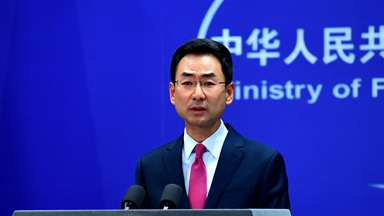 Dialogue and consultations based on equality, sincerity and mutual respect are the only viable way out for the China-U.S. trade issues, a Foreign Ministry spokesperson said Wednesday.

After Washington announced the latest tariff offensive against China, U.S. Commerce Secretary Wilbur Ross told media that the intention of the U.S. is to make constructive dialogue with China. As to whether and when the two sides would hold such dialogue, Ross said the matter is in China's ballpark.

In response, spokesperson Geng Shuang said at a daily news briefing that on one hand sending out negotiation invitations, on the other hand keeping up maximum pressure has become a routine trick of the U.S., while China has seen clearly and taken it calmly.

"Not long ago, China received an invitation from the U.S. to hold trade negotiations, and the two sides had been in discussion about the details," Geng said. "However, the U.S. on Tuesday announced additional tariffs to be levied on 200 billion U.S. dollars worth of Chinese goods, and threatening to adopt further tariff escalation measures."

Geng also mentioned two such cases that occured in June and August.

"Threats, intimidation and blackmail against China are useless," the spokesperson said, adding China would continue to steadfastly advance reform and opening up in line with its own timetable and roadmap while continuing to firmly safeguard its legitimate rights and interests.

"The essence of China-U.S. trade cooperation is mutual benefit," he said, adding that it is not terrible if there are differences, while dialogue and negotiations based on equality, sincerity and mutual respect are the only correct way to resolve China-U.S. trade issues.

"We hope the U.S. side could demonstrate goodwill and sincerity," he said.