Diego Costa scored on a deflection to lead Spain to a 1-0 win over Iran on Wednesday at the World Cup.

Costa broke the deadlock in the 54th minute after being set up by Andres Iniesta. The powerful striker turned in the area and took a shot but the ball deflected off Ramin Rezeian before bouncing back onto Costa’s knee and into the net.

Costa, who also scored two goals in the opening match, has three goals at this year’s World Cup, trailing Cristiano Ronaldo by one. He also has nine goals in his last nine starts for Spain.

Both Spain and Portugal have four points in Group B following their 3-3 draw and subsequent 1-0 victories. Iran has three points in the group but Morocco has been eliminated.

Facing a very compact Iranian team that came out to defend, Spain pressed very high and had to be patient. The 2010 World Cup champions were almost caught against the run of the play when Karim Ansarifard unleashed a powerful strike that ended up in the side-netting following a long thrown in.

Trailing in the second half, Iran nearly equalized when Saeid Ezatolahi had a goal was ruled out on video review.

Iran continued to push hard and managed to challenge with some fast counterattacks.

Spain was lucky not to concede toward the end as Mehdi Taremi connected with a cross from Ansarifard but his header from close range went over the crossbar.

First place in the group could be decided by goal difference.

Spain will face Morocco in its final match on Monday in Kaliningrad, while Portugal plays Iran in Saransk on the same day.

But with three points, Iran has still a chance to qualify for the knockout stage. The Iranians will need to beat Portugal to advance.

It’s not just slick play within the Spain team.

With a superb display of collective grit, the Spanish showed they are as united as ever despite the turmoil created by the firing of coach Julen Lopetegui on the eve of the tournament.

Spain is now unbeaten in 22 matches, with 15 of those wins. The team’s last loss was against Italy in the round of 16 at the 2016 European Championship.

Iran was dangerous from set pieces and its restless defensive display was impressive. The team also created a few excellent chances, including that missed header from Taremi in the 83rd minute. 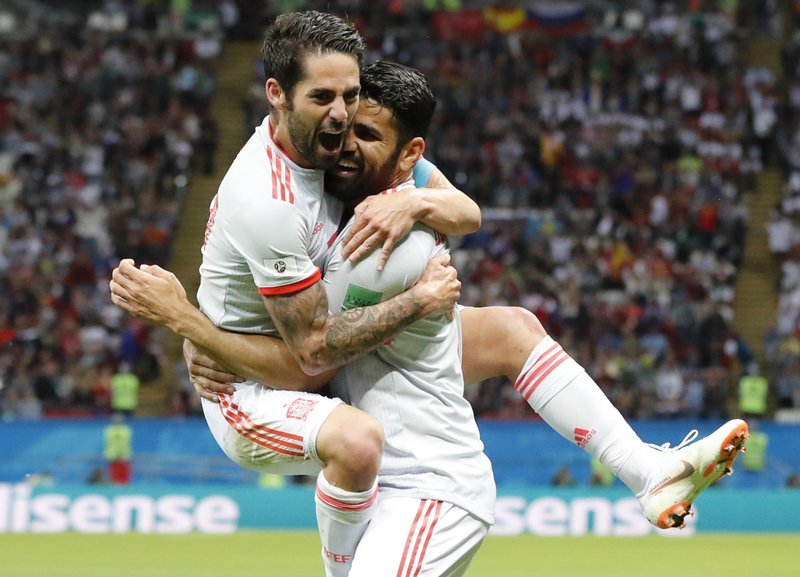