LONDON, Aug. 24 (Xinhua) -- The Group of Seven (G7) held a virtual summit on Tuesday as the United States and its allies scramble to complete evacuations from Taliban-held Afghanistan before the impending Aug. 31 deadline, while contention among the "rich countries club" runs deep over U.S. hasty withdrawal from the Asian country and the chaos it engendered. 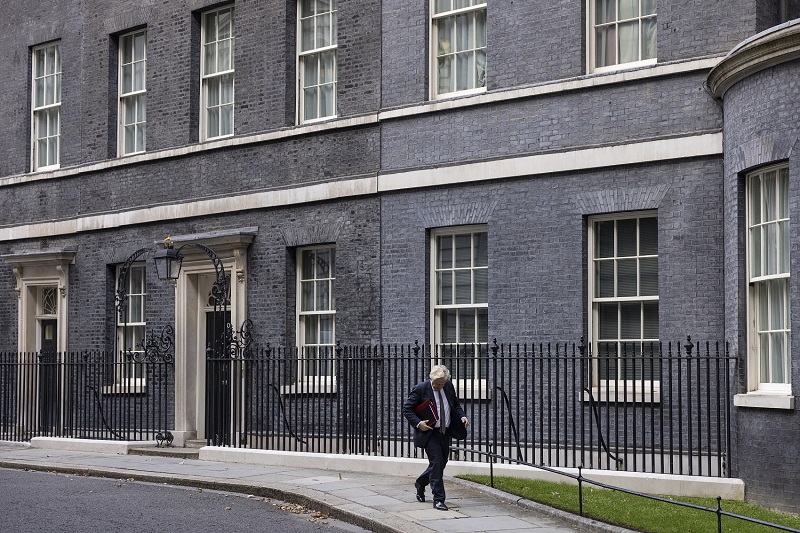 G7's "immediate priority" is to ensure the safe evacuation of their citizens and Afghans who "have assisted" the group's "efforts over the past 20 years," said a statement released after the summit, which was chaired by British Prime Minister Boris Johnson.

Despite pressure from U.S. allies on President Joe Biden during the summit to extend his Aug. 31 deadline for troops withdrawal, Biden has decided to stick to the scheduled date. Earlier on the same day, the Taliban said there will be "no extensions" of the deadline.

CHAOS LEFT BEHIND IN KABUL

In the days since the Taliban's takeover of Afghanistan, tense and chaotic scenes at the Kabul airport have saddened the world.

Multiple deaths have been reported, including in the horrific manner of falling from the sky after clinging to planes. Over the weekend, at least seven Afghan civilians were killed during a stampede outside the airport.

As the deadline for evacuation is only one week away, James Heappey, junior minister for the armed forces at the British Ministry of Defense, has warned that Britain will not be able to evacuate everyone it hopes to.

"The fact is we will get out as many as we possibly can, but we have been clear throughout that there is a hard reality that we won't be able to get out everybody that we want to," he said on Monday.

French Minister for Europe and Foreign Affairs Jean-Yves Le Drian told reporters on Monday that "additional time" was "necessary" to carry out the evacuations.

However, as the United States and the Taliban both ruled out deadline extension, it remains to be seen how the events will unfold when the deadline expires with thousands expected to be still left stranded near the Kabul airport.

Meanwhile, the likely massive influx of Afghan refugees has reopened divisions in Europe, as not all Europeans are willing to roll out the welcoming mat for the vulnerable people from the war-torn country.

"France (had) already taken its part," spokesperson for the far-right National Rally, Julien Odoul, said on France Inter, a major French public radio channel, on Monday, arguing that "the terrorists (have) taken advantage of the migratory highways to infiltrate and then hit us."

The chaos and harrowing scenes in Kabul have attracted a torrent of criticism over the U.S. hasty withdrawal.

"The abandonment of Afghanistan and its people is tragic, dangerous, unnecessary," he said. "We didn't need to do it. We chose to do it. We did it in obedience to an imbecilic political slogan about ending 'the forever wars.'"

"The decision to withdraw from Afghanistan in this way was driven not by a grand strategy but by politics," Blair noted.

Norbert Roettgen, chairman of the Committee on Foreign Affairs in Germany's lower parliament, told Deutsche Presse Agentur on Tuesday that "part of the disaster is that the U.S. decided to withdraw unilaterally."

"Why did he not understand that his decisions would create chaos?" Abrams said last week.

Claiming to be in pursuit of Osama bin Laden, the alleged mastermind of the 9/11 terror attacks in 2001, the U.S.-led military forces invaded Afghanistan. Since then, they have caused more than 30,000 civilian deaths, injured more than 60,000 and resulted in about 11 million refugees.

"The stupidity and incompetence" displayed over the Afghan withdrawal have once again confirmed that the U.S. elites "don't understand the rest of the world, and aren't fit to govern their own country, let alone the globe," British newspaper The Daily Telegraph said in an opinion article last week.

Paolo Gentiloni, European commissioner for economy and also former Italian prime minister, said on Monday that the failure of U.S.-led forces in Afghanistan showed that the set of liberal values held by the West is "not a unanimously shared model."

Effie Pedaliu, a visiting fellow at the IDEAS foreign policy think tank of the London School of Economics and Political Science (LSE), said in an article published on LSE website that comparisons between Saigon and Kabul are "false and misleading."

"In the 1960s and 1970s it was American credibility that was at stake. Now, it is the trustworthiness, reliability and relevance of the western model of governance," she said.