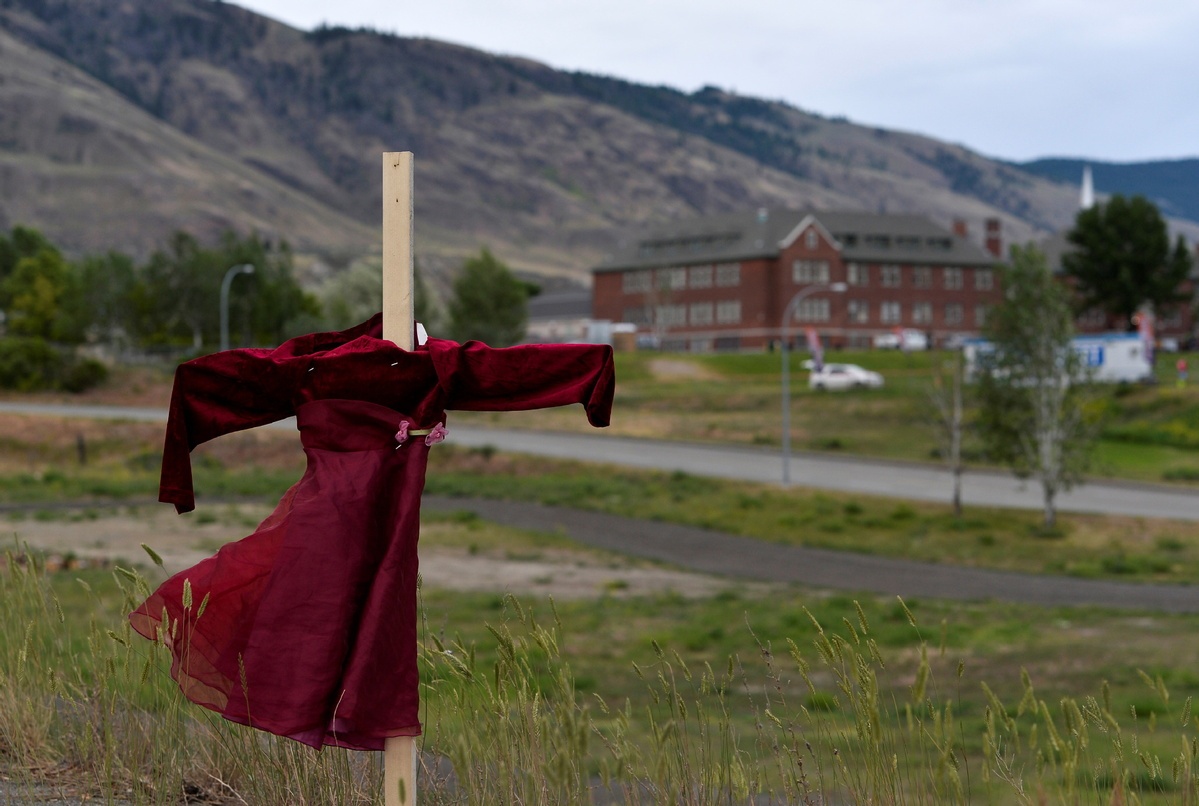 A child's red dress hangs on a stake near the grounds of the former Kamloops Indian Residential School after the remains of 215 children, some as young as three years old, were found at the site in Kamloops, British Columbia, Canada June 6, 2021. (Photo: Agencies)

With the recent discovery of hundreds of unmarked graves of indigenous children at former Canadian residential schools, there is a movement to call off or downplay the nation's patriotic Canada Day.

"It's tough to celebrate anything right now, in my opinion," John Nick Jeddore, a neurology resident at Memorial University from Miawpukek First Nation, told the CBC. "These stories have been present since lived experiences have been in Canada ... but they're absolutely gut wrenching when they're confirmed."

Canada Day celebrates the anniversary of Canadian confederation, which took place on July 1, 1867, when the Constitution Act was passed in which the three separate colonies of Canada, Nova Scotia and New Brunswick were united into a dominion within the British Empire.

"Celebrating Canada Day is being seen as inconsiderate to all the children's lives that were lost and we encourage everyone to consider the price these children had to pay at the hands of the Canadian government," Chief Bobby Cameron of the Saskatchewan Federation of Sovereign Indigenous Nations said in a statement.

The remains of as many as 751 people, mainly indigenous children, were discovered at the site of a former residential school in the province of Saskatchewan, a Canadian indigenous group said on June 24.

The discovery came after the remains of 215 children were found in unmarked graves in May on the grounds of another former boarding school in British Columbia.

"We are in a time of mourning in our community and our country. It does not feel like a time for celebration. It feels like a time to reckon with the truth of residential schools and the impacts of racism and colonial relationships in our country," said Mayor Charlie Clark of Saskatoon, the largest city in Saskatchewan, in a statement to CBC.

"Anyone who truly wants to be proud to call Canada their home also needs to know there's a lot of baggage that comes with Canada," Jeddore told CBC. "It gives us an opportunity to learn from the terrible things that have happened ... and try to improve the Canada we all love, or want to love, for future generations."

The National Arts Centre, Ottawa Tourism and the Department of Canadian Heritage said a "different outlook" is needed for the holiday.

"We are at a time of reckoning regarding our difficult past and we acknowledge the need to approach this Canada Day with a different outlook, moving away from the usual celebratory tone to one of reflection on our path toward reconciliation," said a statement by the organization.

Michael Crockatt, president and CEO of Ottawa Tourism, said he also favors a "more reflective" Canada Day and a time to "double down on commitments to confront present-day systemic racism and barriers", the Ottawa Citizen reported.

Canadian Heritage, organizer of the July 1 events on Parliament Hill (online again this year due to the pandemic) in the capital Ottawa said in a statement that raising awareness of the "atrocities perpetuated against Indigenous peoples, the painful legacy of Canada's colonial system and the violence and grief Indigenous peoples still experience" is a step toward reconciliation.

"Canada Day can also be an occasion to reflect on Canada's past and present, what we love about this country, and what we can do collectively to make it a better place for everyone to live and reach their full potential," the statement said.

However, a poll of 1,542 Canadians done by Leger for Postmedia found opposition to canceling the day, with 77 percent opposed and 14 percent supporting.

"We can reflect on the reality that we still have work to do to improve the quality of life for our First Nations, Metis and Inuit citizens, for racial minorities, for those with disabilities, for those suffering economically, physically and mentally from the pandemic. But should we cancel Canada Day because we are not perfect? Of course not," said an editorial in the Toronto Sun.

The Canadian Constitution recognizes three groups of aboriginal peoples: Indians (more commonly referred to as First Nations), Inuit and Métis. They are three distinct peoples with their own customs.

According to the Truth and Reconciliation Commission of Canada (TRC), a body mandated to tell Canadians about the truth of residential schools, more than 150,000 First Nations children were required to attend state-funded Christian schools as part of a program to assimilate them into Canadian society from the 19th century until the 1970s.

They were forced to convert to Christianity and not allowed to speak their native languages. Many were beaten and verbally abused without any contact with their parents, and thousands are said to have died, which the TRC has called a "cultural genocide".

Meanwhile, indigenous and Catholic leaders have condemned a recent spate of church vandalism in Canada. In the province of Alberta, a fire was extinguished in the early morning hours of June 28 at the Siksika Nation Catholic Church, according to the National Catholic Register. The Royal Canadian Mountain Police said that they believe the fire was deliberately set.

From June 21 through June 26, four Catholic churches located on tribal lands in British Columbia burned to the ground, the website reported. An Anglican church was also found to be on fire on June 26, but the fire was extinguished.