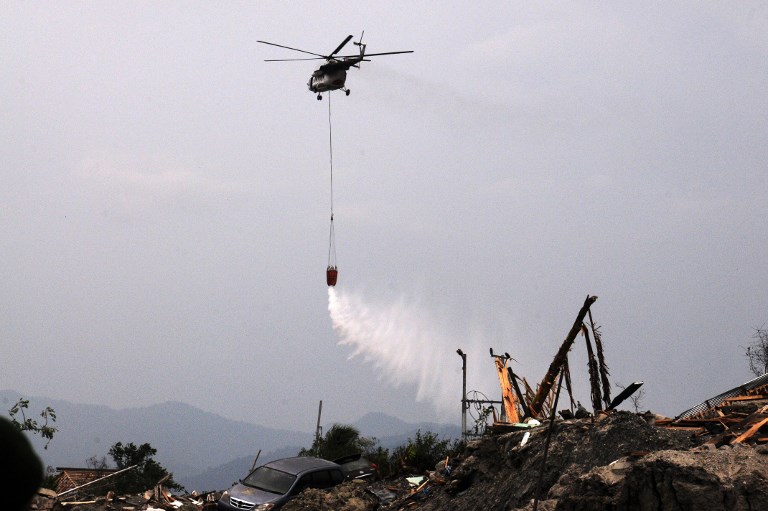 A helicopter operated by Indonesia's Disaster Management Agency sprays disinfectant to sterilise an area, affected by liquefaction due to the September 28 earthquake and where thousands are still feared buried, in Palu on October 18, 2018. (Photo: AFP)

The disinfectants were dropped from a MI-8 helicopter especially on Petobo and Balaroa residential areas, where over 5,000 people were missing, spokesman of the national disaster management agency Sutopo Purwo Nugroho said.

"Thousands of people were predicted to be missing and buried under the soil during the liquefaction (and the soil movement)," he told Xinhua in a text message.

Areas outside hospitals where bodies were gathered after being retrieved also came into focus, Sutopo added.

"The disinfectant bombings and spray of disinfectant are in anticipating of the spread of disease by vector such as flies, cockroaches and mice, which are threatening health condition in surrounding areas," Sutopo said.

The catastrophes have forced over 87,000 people to flee home and most of them live in encampment and under tarpaulins, according to the disaster agency.

Indonesia is prone to quakes as it sits on a vulnerable quake-affected areas called the Pacific Ring of Fire.