ADEN, Yemen, Dec. 28 (Xinhua) -- Scores of internally displaced families returned to their homes in the country's southern province of Abyan on Monday, while other families are still seeking refuge in other areas of the war-torn Arab country, a military official told Xinhua. 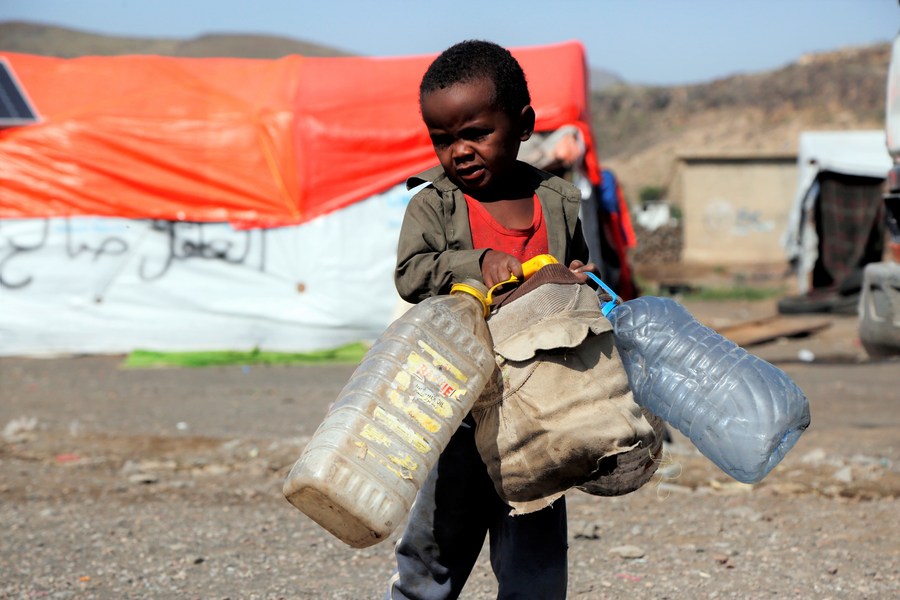 An internally displaced child holds jerrycans to fill them with water at Dharawan displaced camp in the northern suburb of Sanaa, Yemen, Aug. 17, 2020. (Photo: Xinhua)

According to the local military source who asked to remain anonymous, "all the people who previously left their residential areas due to the internal fighting began to return to their houses in the southern regions."

He said that the displaced families returned after the fighting ended in their areas and the adjacent villages in Abyan.

Previous fighting in Abyan forced many families to leave their houses and seek refuge in other safe areas to avoid random shelling, the source said.

In the coastal town of Shuqrah located on the Arabian Sea, local sources reported humanitarian violations including kidnapping of people returned from displacement and confiscating their own properties by armed groups.

"After the de-escalation we returned to our residential areas in Shuqrah but we found that all of our houses and business stores were completely plundered by fighters who came previously from the northeastern province of Marib," one of the residents named as Salem Yahya told Xinhua by phone.

He said that "we are also afraid from moving freely in our areas as pro-government fighters planted hundreds of landmines in and around Shuqrah during the war."

Last week, independent southern forces linked to the Saudi Arabia-led coalition were deployed in Abyan and began dismantling landmines after the withdrawal of military units of the Southern Transitional Council (STC) and other troops loyal to the government from the flashpoint areas.

In Hodeidah's southern parts, violations were committed by the Houthis against scores of displaced women living in tents along with their children, forcing them to seek another areas for refuge for the second time.

"Targeting women and injuring nearly five of them by indiscriminate Houthi shelling sparked anger among the local residents in various areas of the country," a local official told Xinhua anonymously.

Last month, the International Organization for Migration (IOM) said that more than 164,000 people have been displaced since the beginning of 2020 in Yemen, which has been witnessing a bloody conflict for nearly six years.

The United Nations is trying to end the war in Yemen that has killed tens of thousands of people, mostly civilians, displaced 4 million, and pushed over 20 million to the brink of starvation.

The six-year-old war has destroyed Yemen's infrastructure, health, educational and economic institutions, reducing more than 80 percent of the population to destitute dependants on foreign humanitarian aid.

The United Nations describes the humanitarian crisis in Yemen as the worst on the planet, with hunger, acute malnutrition, epidemics, and economic blockade killing thousands of Yemen's children. Enditem