Even as schools have returned in full swing across the country, complications wrought by the pandemic persist, often falling hardest on those least able to weather them: families without transportation, people with limited income or other financial hardship, people who don't speak English, children with special needs. 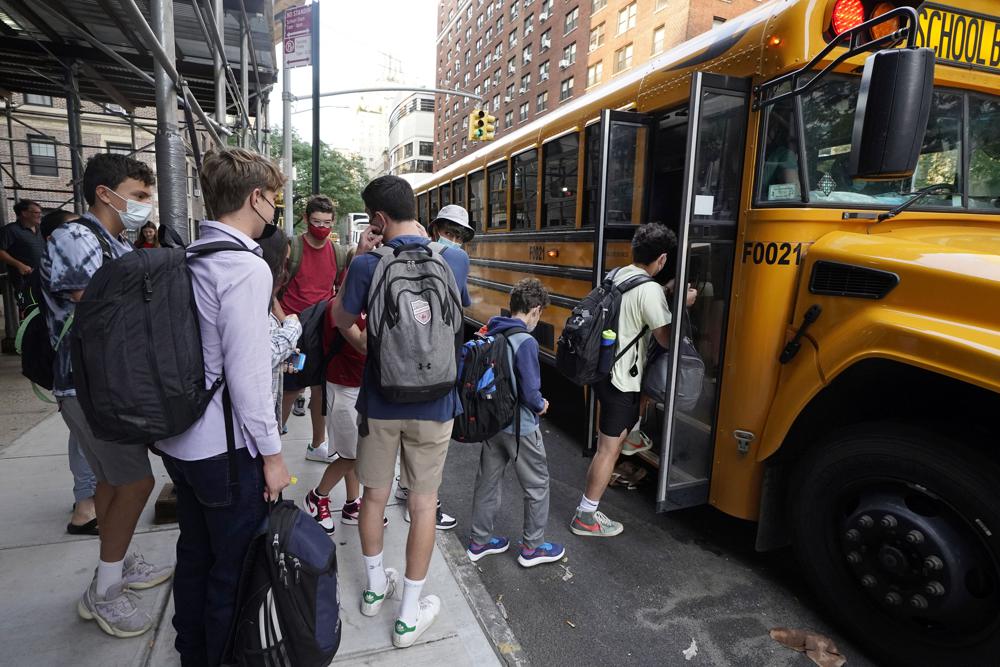 Coronavirus outbreaks in school and individual quarantine orders when students get exposed to the virus make it a gamble on whether they can attend classes in person on any given day. Many families don't know where to turn for information, or sometimes can't be reached.

And sometimes, because of driver shortages, it's as simple as the school bus not showing up.

Keiona Morris, who lives without a car in McKeesport, Pennsylvania, outside Pittsburgh, has had no choice but to keep her boys at home on days when the bus didn't arrive. Her two sons have missed about two weeks' worth of classes because of such disruptions, she said.

Taking her older son to school on the civic bus system those days would mean not making it home in time to get her youngest to elementary school, she said.

"I feel like they're leaving my kid behind," Morris said. "Sometimes, he feels like he's not important enough to get picked up."

For some families, it's a matter of not having the private resources to deal with breakdowns in the public education system. For others, language barriers or other communication issues leave them uninformed about things like programs that let students return to school despite virus exposures, as long as they test negative for infection.

And while some students can keep up with school remotely during quarantines, others receive little to no instruction, or they lack internet or devices to connect.

As districts seek solutions, they have to consider that disproportionate burden, said Bree Dusseault, principal at the Center on Reinventing Public Education at the University of Washington.

"If you're going to be using a test as a tool to shorten quarantine, then all students have equal and free and easy access to that test," she said.

The first day the shortages affected her son's route, Morris did not see an early morning email notification that her son's bus would be canceled, and the two of them waited at the stop for a ride that never came.

Staying at home has taken a toll on her kids, who are both more engaged when learning in person. On the days their bus was canceled and they had no access to the day's lesson, the makeup work built up, putting them behind in class, she said.

For her older son, she said, the transition to middle school and missing social aspects of being with peers have been especially hard.

The effects of unpredictable stretches at home can mirror those of chronic absenteeism and lead to long-term harm to learning, said Robert Balfanz, a research professor at the Johns Hopkins University School of Education.

"The irregularity of your attendance is as important as the total amount you miss," Balfanz said. "It lingers with you because you miss key moments of learning that everything else builds upon, and that can even lead to later frustrations."

Some families have had more guidance than others in navigating unexpected, unstructured periods of learning at home.

In Seattle, Sarah Niebuhr Rubin's son was sent home for two weeks when he was identified as a possible virus exposure. Because the exposure counted as an excused absence, Rubin said her son received no live instruction and no consistent services for his reading disability, except for two sessions with specialists who went out of their way to meet with him.

Without those services, she said, he struggles to complete work without constant supervision, which she could not provide while working from home.

"There really was nothing," Rubin said. When her son returned to the classroom, she said it felt like the school year was "starting all over again."

To minimize days out of school, some districts have implemented a "test to stay" option, where children can remain in school despite exposures to infected people as long as they continue to test negative for COVID-19.

In Georgia's Marietta City Schools, students who are being tested go to a central location, where they are given a rapid antigen test in the parking lot. A negative test means they can go to school that day, while those who test positive are directed to quarantine.

Roughly 30% to 40% of eligible students participate, Superintendent Grant Rivera said, and the district has begun to identify some barriers to access for families. Some cited transportation hurdles or time constraints, such as work schedules.

About a quarter of families said they weren't aware of the program, Rivera said. Parents are notified of the testing program when they learn their child is a close contact, and the district follows up with an email.

"When we make this initial phone call, there's kind of like input overload and shock of, 'What am I going to do about my kid and childcare and work?'" Rivera said. "We're following up with an email, but in a district with a high ESL immigrant population, the email may not be understood by everybody in the family, or they may not be getting it."

Rivera said he hoped to expand messaging through community partners, as well as through other methods like texting.

The possibility of further disruptions keeps some parents on edge.

For a while, firefighters in McKeesport were volunteering to drive children to and from school. Recently, Morris' children's bus has been on time. But she worries she and her son will be left waiting again.

"I have that worry in the back of my mind that it's going to happen again," Morris said. "And if it does, I'm just going to be ready to pull my kids out of school and homeschool them, even though it'll be more tough for me."