WORLD Distribution of homegrown jab starts in the UK

Distribution of homegrown jab starts in the UK 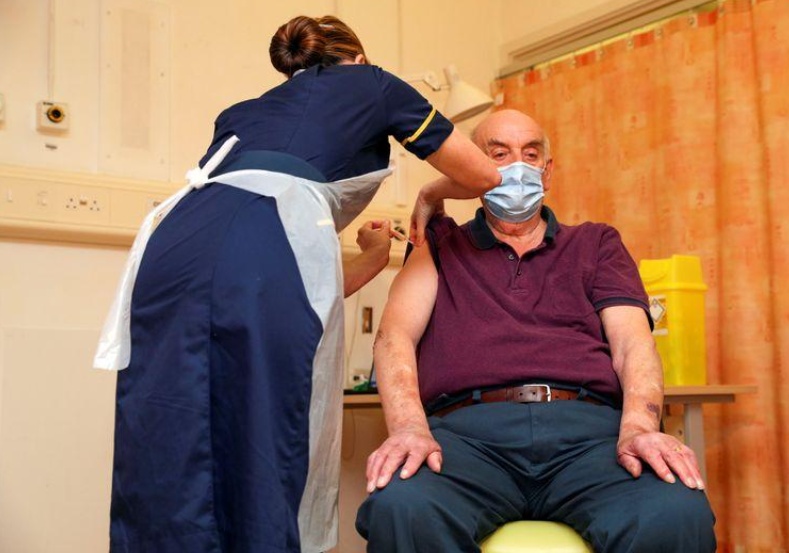 The United Kingdom started vaccinating people on Monday with its homegrown novel coronavirus inoculation developed by the British-Swedish pharmaceutical giant AstraZeneca and the University of Oxford.

Health Secretary Matt Hancock described the rollout as a "pivotal moment" in the fight against the virus and the COVID-19 disease it causes.

He said the vaccine offers hope lockdowns can eventually be eased.

"It's going to be a tough few weeks ahead, but this is the way out," he said on the BBC's morning news program Breakfast.

Hancock said the UK has 530,000 doses of the vaccine in hand and is expecting another huge consignment this week.

The UK is also using a vaccine developed by Pfizer and BioNTech and has administered more than 1 million doses since Dec 8.

London has ordered around 140 million doses of the two vaccines.

Stephen Powis, the National Health Service's medical director, told the BBC: "The NHS's biggest vaccination program in history is off to a strong start, thanks to the tremendous efforts of NHS staff, who have already delivered more than 1 million jabs."

Prime Minister Boris Johnson has said he expects millions of people to be injected each week, after logistical issues are ironed out.

But he said that will not be enough to avoid an imminent strengthening of lockdowns in England, in the face of a mutation of the virus that is spreading very quickly.

Hancock agreed, saying on Radio 4's Today program that the "old tier system" is "no longer strong enough" to contain the virus.

The devolved governments of Northern Ireland, Wales, and Scotland have taken similar steps.

And teaching unions called on Johnson to abandon thoughts of compelling children to return to school. Secondary schools and colleges were ordered to remain closed until at least Jan 18 following the Christmas vacation but the government wanted many primary schools outside London and the Southeast to reopen on Jan 4 as planned.

ITV News said on Monday that many primary schools did not open their doors as ordered but emailed parents to say a shortage of teachers had forced their closure.

One unnamed primary school teacher told the broadcaster: "I fear for my co-workers, my family, and my own health. We feel vulnerable, scared and anxious."

The UK's largest teachers' union, the National Education Union, said schools should be allowed to switch to remote learning for the next two weeks; and it urged teachers to work from home on safety grounds.

A joint letter from the nation's main education unions said forcing teachers back into the classroom would expose them to "serious risk of ill-health" and "risks increasing the infection rate".

The Financial Times noted that the UK has also now deployed more than 5,000 members of the armed forces to help in the fight against the pandemic, which makes it Britain's largest homeland peacetime operation. Many of those helping out are involved in either the rollout of the two vaccines or the virus-testing of students.

While the pandemic has kept members of the armed forces, teachers, and medical workers extremely busy, the full extent of its idling of the nation's enterprises became clear with the publication of analysis by the industry magazine Retail Week that shows 176,000 retail jobs were lost in 2020, along with 15,000 stores. The Centre for Retail Research said the job losses were 25 percent higher than those of the year before.

And the economic fallout from the virus is likely to also hit the corporate sector, with several top law firms saying they may cut their floor-space requirements by as much as 50 percent in the face of changes in working practices that are expected to be permanent.

He said companies simply do not need the space they did, although he said long leases mean many will have to wait before downsizing.