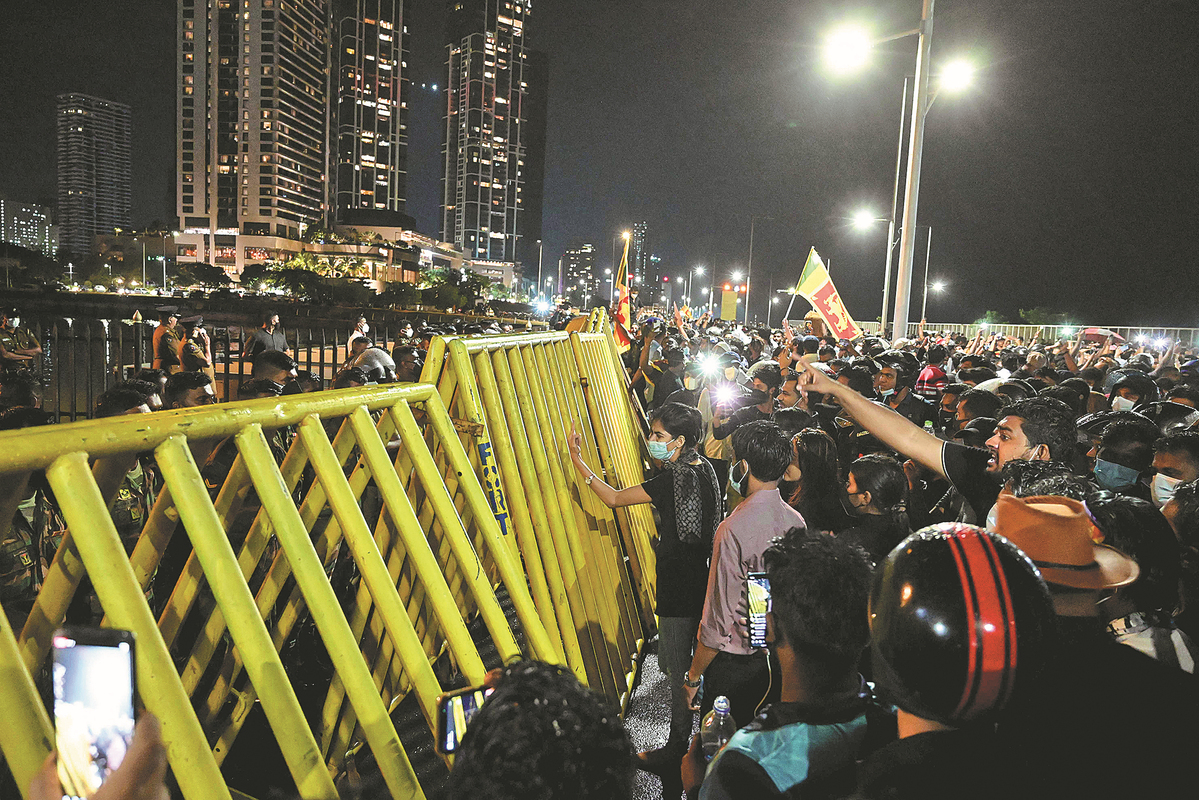 Protesters face soldiers and police standing in position behind a fence as they take part in a demonstration outside the president's office in Colombo on Monday. They are angry over soaring prices of fuel and other essentials. (Photo: AFP)

With Sri Lankans taking to the streets over rising fuel prices and other concerns, experts say people's needs could be served with greater efforts to develop more diversified industries in the country and avoid an overreliance on international markets.

The unrest in Sri Lanka is caused by "both long-term and short-term reasons", said Sirimal Abeyratne, an economics professor at the University of Colombo.

Recent causes of discontent include tax cuts in 2019, the impact of the COVID-19 pandemic and fuel prices sent higher by the Ukraine crisis. The tax cuts led to the downgrading of Sri Lanka's credit rating in 2020, which makes it harder for the country to borrow, Abeyratne said.

"Then, the pandemic worsens the situation because of the decline in the tourism industry and workers' remittances," he said.

"Because of the collapsing of the two important sectors, the country came to a point at which it could not make the annual debt obligations."

The long-term factors include the weak performance of exports and a lack of foreign direct investment, he said.

With people's growing impatience over shortages of fuel and other essential supplies, organized protests late last week led to a Cabinet reshuffle.

Hours after Cabinet ministers tendered their resignations en masse on Sunday, Sri Lankan President Gotabaya Rajapaksa on Monday named four ministers. According to the presidential office, more ministers are expected to be sworn in later.

Also on Monday, Rajapaksa extended an invitation to all political parties to join the government in finding solutions to the crisis. But the opposition groups seem not fully ready to cooperate.

Sri Lanka's economy has suffered due to the pandemic in recent years. Though the country's Department of Census and Statistics announced on March 29 that its gross domestic product grew by 3.7 percent in 2021, GDP still fell short of the 2019 level.

Lin Minwang, deputy director of the Center for South Asian Studies at Fudan University, said Sri Lanka's economy is heavily dependent on the international markets, which means that the "entire outside environment can have a huge impact on its internal social, economic and political life".

Sri Lanka has been facing power cuts since February due to dwindling electricity production in hydropower plants as well as diesel shortages that have crippled the operations of thermal power plants, the Public Utilities Commission of Sri Lanka said. The health sector has also faced a shortage of essential drugs.

"The best solution for Sri Lanka is to develop modern industries, and then improve its export capacity, diversify the industries, and trying to avoid the disruption of the impact of international market," Wang said.

The World Bank has pledged to give assistance for the purchase of essential medicines. China will provide 2,000 metric tons of rice as emergency food aid.