The Group of Seven (G7) on Sunday wrapped up its first in-person summit in almost two years against the backdrop of protesters taking to the streets and beaches and accusing the world's richest countries of making "empty promises". 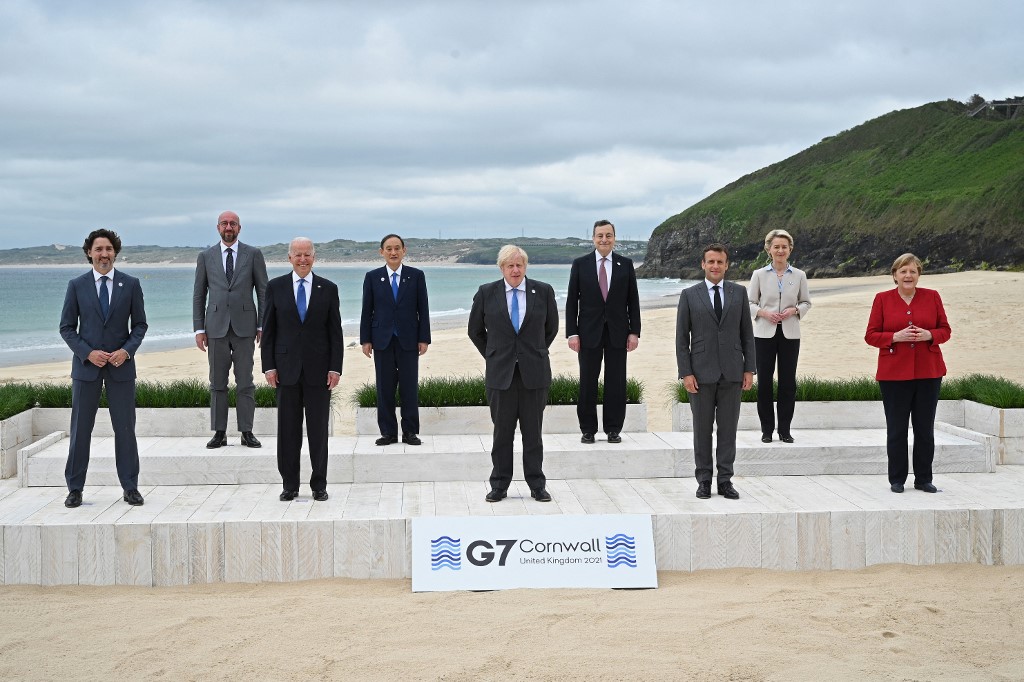 Critics said the three-day gathering, held in Britain's southwestern resort of Carbis Bay in Cornwall, is a "historic missed opportunity" as it only threw up more questions than answers to some of the world's thorniest issues.

With various agendas and interests, the sense of unity that the rich club is trying to hype up remains elusive.

In a joint communique issued after the summit, the G7 leaders belatedly pledged to provide 1 billion doses of coronavirus vaccine to the less developed countries over the next year.

While the gesture is seen as a step in the right direction, campaigners and critics feel it lacks ambition and is far too slow as it was not enough to cover the needs of these countries.

"We need more than that," UN Secretary-General Antonio Guterres said of the G7 plan. "We need a global vaccination plan. We need to act with a logic, with a sense of urgency, and with the priorities of a war economy, and we are still far from getting that."

The World Health Organization estimates that at least 11 billion doses are needed to stand a chance of beating the COVID-19. Countries like Britain, Canada and the United States have ordered enough doses of vaccines to immunize their entire populations multiple times over.

Commenting on the shortfall in vaccines, former UK prime minister Gordon Brown said the summit would "go down as a missed opportunity", and "an unforgivable moral failure" when the world's richest countries didn't come up with a comprehensive plan to deliver vaccination by the middle of next year.

The leaders also agreed to take measures to speed up economic recovery after the pandemic by investing in infrastructure and driving innovation, and to secure future prosperity by championing freer and fairer trade.

On climate change, the G7 leaders agreed to adopt strict measures on coal-fired power stations and reaffirmed to raise $100 billion a year to help the less developed countries cut emissions.

The plan, with an apparent lack of binding agreements and timetables, has drawn strong criticism.

According to Teresa Anderson from Action Aid, an international charity, the pledges by the G7 didn't come close to addressing the urgency and scale of the crisis.

"Rich countries have so far failed to deliver on climate finance pledges. The majority of what has been provided so far has been in the form of loans, which are pushing vulnerable countries further into debt and poverty," she said.

Kirsty McNeill from Crack the Crises, a coalition of charities and NGOs, believed that the G7 summit was a "historic missed opportunity" on COVID-19 and climate change.

Leaders arrived "with good intentions but without their cheque books," she noted.

IN THE NAME OF "RULES-BASED SYSTEM"

Unsurprisingly, on China, the G7 joint communique did not fail to mention issues such as Xinjiang, Hong Kong, Taiwan and East and South China Seas, in the name of "upholding the rules-based international system and international law", despite pledging to cooperate with China to tackle "shared global challenges" like climate change and biodiversity loss.

"There is only one kind of multilateralism, that is, the genuine multilateralism based on the purposes and principles of the UN Charter and international law, and featuring equal treatment, cooperation and mutual benefits, not pseudo-multilateralism serving the interests of a small clique or political bloc," the spokesperson added.

During the summit, the G7 leaders also adopted the US-backed Build Back Better World (B3W) plan to support lower- and middle-income countries in building better infrastructure, which is deemed by many as an attempt to rival the China-proposed Belt and Road Initiative.

In an earlier report, the London-based Financial Times (FT) stated that on his first overseas visit, US President Joe Biden may try to "coax a wary Europe to work more closely with Washington on China," among his priorities.

Martin Jacques, a senior fellow at Cambridge University, said it's no surprising that the "greatly diminished" G7 took a very negative view about China, "because it's only defensive and it's kind of embattled."

The G7 would be making a "mistake" if they seek to exclude or contain China in the face of global challenges, he told Xinhua. "I think it's a mistake for the G7 to do what they did. They should be seeking ways of developing cooperation with China, not thinking to contain or rebuff China." 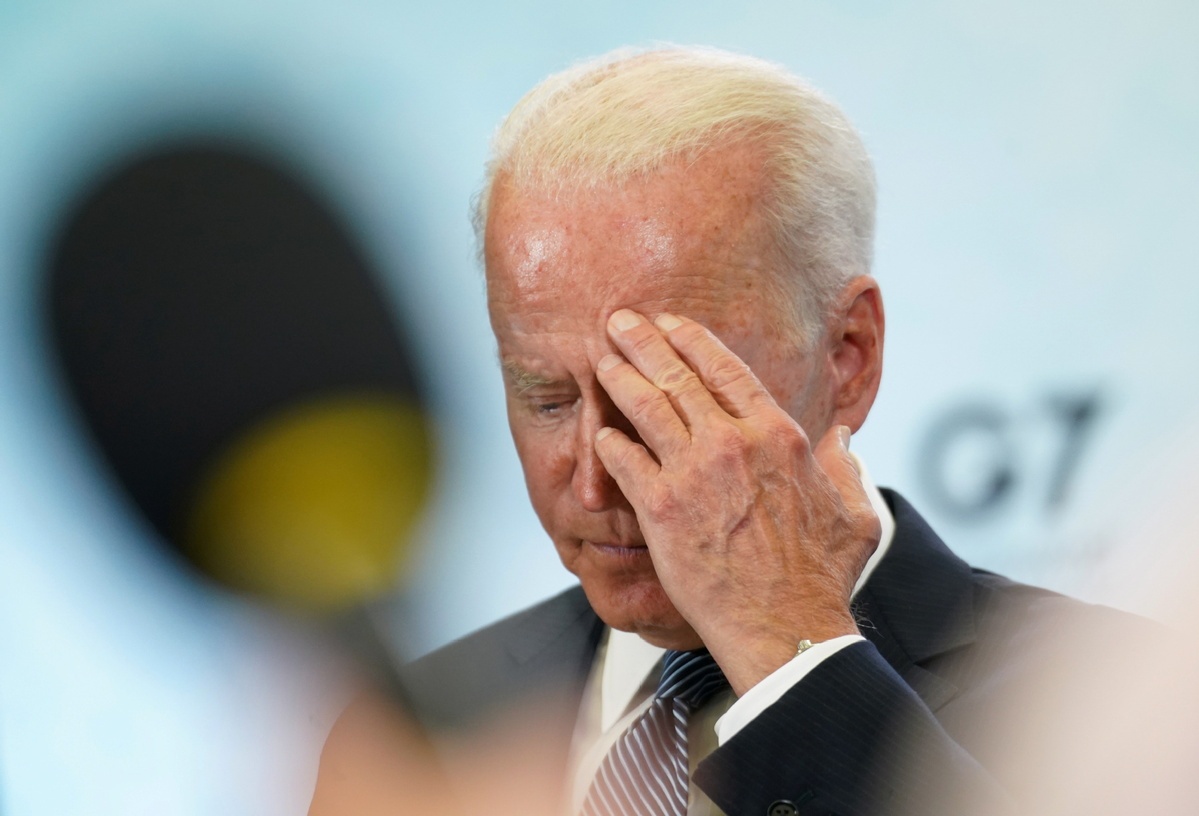 US President Joe Biden puts his hand to his head during a news conference after the G7 summit concluded, in Newquay, Britain, June 13, 2021.

Despite a seemingly unified image and claims that "America is back", issues such as NATO (North Atlantic Treaty Organization) defense budget, Airbus-Boeing dispute, and more recently, Northern Ireland in the context of Brexit, have threatened to divide the Western allies.

Notably, doubts still remain among the Europeans as to how sincere the United States is to cooperate with Europe on international issues after four tumultuous years of the Donald Trump administration.

"Beneath the likely statements of unity, Biden will have to deal with an awkward reality... It (Europe) has different economic and strategic priorities from the US and there is a constant risk of those divisions breaking into the open," the FT reported.

Some EU leaders, including German Chancellor Angela Merkel, are wary of Cold War-style rhetoric aimed at China and some do not like the term "adversary", which is often used by Washington when referring to Beijing, according to the FT.

"I think there's a certain amount of weariness (in Europe) after four years of Trump and four years of pushback against the Transatlantic Alliance, NATO and, and so forth," Rajneesh Narula, an expert of international relations at University of Reading, told Xinhua.

The British expert believes that Biden, who has not reverted everything Trump has done, is still advocating "America First", just without saying it aloud.

"Biden hasn't shown the intention of reverting everything Trump has done. He understands that there are enough people voting in America who care about the 'America First' agenda. So he is saying America first but without using those words," Narula said.

Julian Mueller-Kaler, a researcher at the Berlin-based thinktank German Council on Foreign Relations, also agreed that Europe would be "very cautious" when dealing with transatlantic relations.

"A lot of Europeans will be very cautious when it comes to this renewal of transatlantic relations," he said.

"So I think it will be a challenge for Biden and the European leaders to come up with concrete policy proposals instead of just good and empty words," he added.