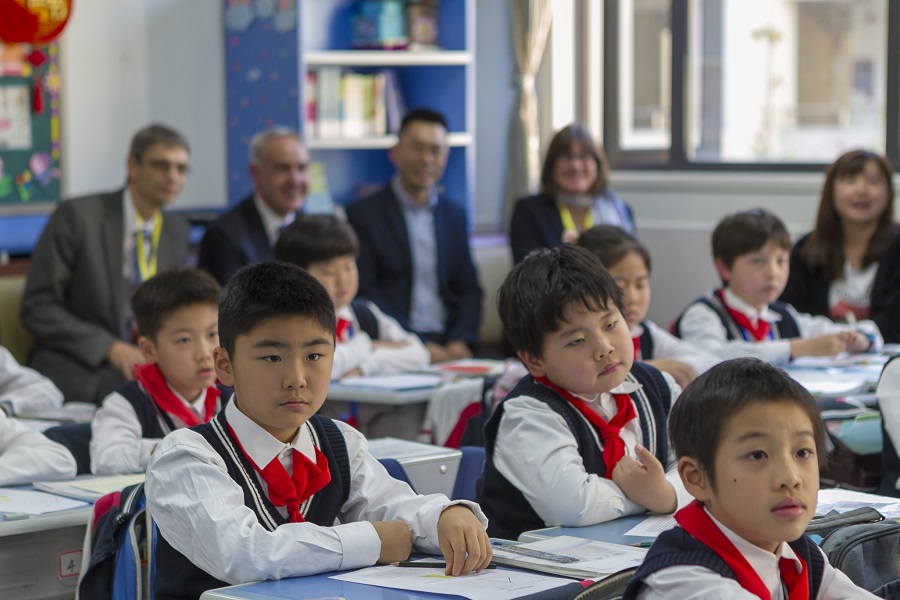 Students listen during a math class at Shanghai Experimental School as math teachers from Britain observe on Nov 11, 2019. (Photo: Xinhua)

The recent announcement that some state schools in the United Kingdom plan to recruit post-16 students in China has drawn a mixed response, with critics arguing that the plans will lead to fewer places for British teenagers, while supporters think it could be a positive thing.

The alliance of a dozen grammar and high-performing comprehensive schools is calling for a change in visa law that would permit Chinese students to study for a longer period of time, at least six months, with a minimum fee of 4,000 pounds ($5,194) per year.

Desmond Deehan, head-teacher of Townley Grammar School in Kent has been leading the initiative. He said the primary purpose is to bring an international dimension and collaboration into English schools in a way that current school funding cannot support.

"If we want our students to have a better understanding of their international counterparts, they need a real chance to engage with them," he said."Currently the only UK students who get the chance to do that are students whose parents are able to afford an exchange program, but very few exchange programs are still running because schools are risk-averse to those as a result of insufficient funding."

Educational appeal is a key driver for Chinese parents sending their children to the UK, so the proposal would open the doors for ordinary Chinese students to take part in a full education program without going through expensive independent schools, which also somewhat confusingly known as public schools, and are beyond the reach of all but the most wealthy few.

Townley Grammar School has forged a close link with China, having previously hosted study visits from Chinese schools, for which China pays 30 pounds per pupil per day to fund a study skill program for students at Townley.

Steve Spriggs, managing director at the London-based consultancy William Clarence Education, hailed the initiative, adding "It's a great move to let more UK and Chinese schools work together, both state and independent.

"I think state schools should be allowed to recruit internationally, as this initiative does not hinder the chances of domestic students, but in fact compliments the UK offering,"Spriggs said.

As the current visa regulations stand, they do not allow state schools to educate international students for longer than four weeks on an education visit. But independent schools and further education, or FE, colleges can sponsor tier 4 study visa for overseas students aged between 16 to 18.

Deehan contended that the freedoms given to independent schools and FE colleges are far greater than those applied to state schools, but there is a demand and respect for UK education which schools should really be making the most of.

Figures from the UK's Department for Education showed that the revenue of total education exports and transnational education activity in 2017 surged to 21.4 billion pounds, a 34.7 percent rise since 2010. For independent schools alone, it rose from 630 million pounds to 970 million pounds.

Schools Minister Nick Gibb has voiced his opposition to the plan, tweeting that state schools should be "increasing the number of poorer pupils they teach, not children of the rich in China".

According to a Home Office spokesman, "As a matter of longstanding policy, state schools are not able to recruit or sponsor international students. This is because state schools are funded by the taxpayer for the purpose of educating those in the UK with a statutory right to education."

Deehan said "What we simply want is to have a longer extended period of placement for our international students in the state schools, but they do not take the place away from a UK student.

"Our intention is to have sufficient funding for those students to enable us to run the programs to include them in the school, without actually having any negative effect on our own students or own budgets, so I cannot use the school budget to fund each student from China."

The figure of 4,000 pounds represents the barest minimum that a state school currently gets funded for a post-16 student in the UK.

Julian Fisher, senior partner at the consultancy Venture Education in Beijing, said he does not believe the current suggestion to recruit Chinese students for 4,000 pounds favors the UK side of the arrangement.

"Given that there are UK parents who would jump at that price for a place in one of these schools, and there are wealthy Chinese parents who would be willing to pay ten times that price for a place, the consortium is underselling a highly prized resource at a time when concerns about economic inequality, equal access and the privatization of government services are particularly acute,"Fisher said.

He pointed out the proposal also brings about the complexity on the Chinese side. "Would applications to the UK schools be open, would they be fairly operated and meritocratic, how would students be selected and would any money exchange hands either over or under the table?"

International schools in China can cost up to 30,000 pounds a year, and their results are far less impressive than these UK state schools. "If the stated aim is to generate revenue for increasing staffing and bursaries for poorer UK students, then the pricing seems incredibly low," said Fisher.