Novak Djokovic's stupendous comeback from injury last year which saw him win two Grand Slam titles earned him the Laureus Sportsman of the Year Award on Monday at a lavish ceremony. 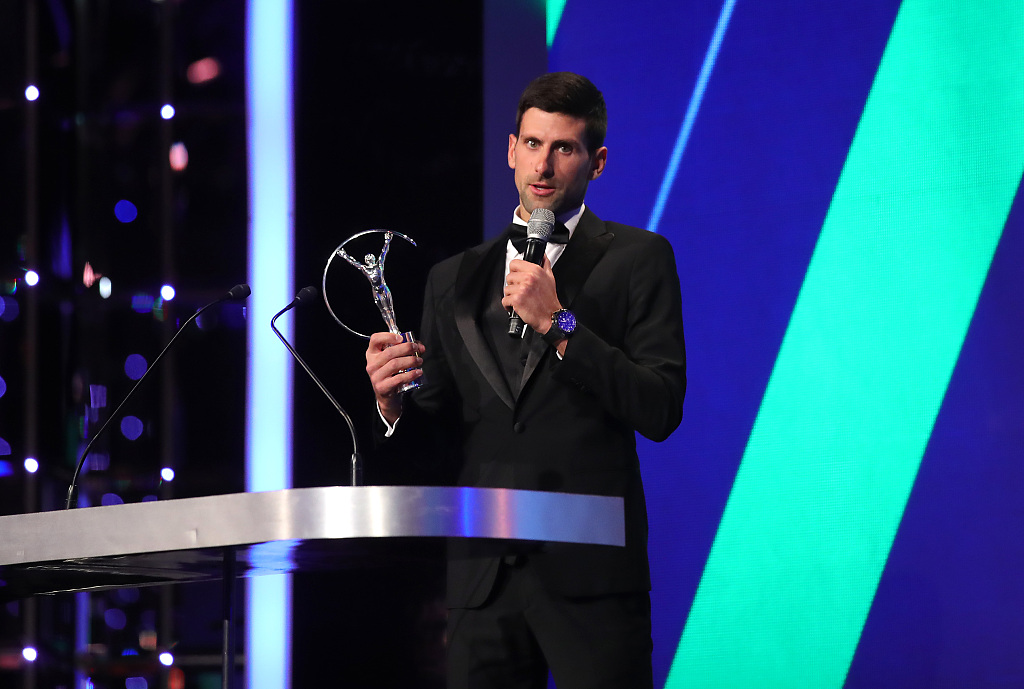 The 31-year-old Serbian -- who added the Australian Open in January to the Wimbledon and US Open crowns he won in 2018 after coming back from elbow surgery -- won the award for a fourth time beating the likes of France's World Cup winner Kylian Mbappe and NBA superstar LeBron James.

Iconic American gymnast Simone Biles won Sportswoman of the Year for a second time on the back of the 21-year-old's historic achievement last year in adding a fourth all-around world championship to her full to bursting medals cabinet.

Djokovic was delighted with his award -- voted on by the 68 members of the Laureus Academy which includes sporting legends such as nine-time singles Grand Slam champion  Monica Seles and Britain's six-time Olympic track cycling gold medalist Chris Hoy.

"Last year was an incredible season for me, returning from injury to win Wimbledon and the US Open is something I'll remember forever," said Djokovic.

Seles, also born in Serbia although now a naturalised American citizen, presented the award to Djokovic, who admitted it had been a long hard road back mentally as well as physically.

"Reflecting on it standing here now it seems like a fairytale story but it tells me one thing," he said.

"In those moments of when you are facing adversity and challenged you should always look inside.

"I did not understand that fully before but now I know where I can always find strength and belief and to keep on going."

Tennis had a golden night as women's world number one Naomi Osaka -- who like Djokovic added the Australian Open to her breakthrough Grand Slam success the US Open -- became the first Japanese winner of a Laureus award, the 21-year-old taking the World Breakthrough of the Year gong.

American golf great Tiger Woods was rewarded for his return from years in the wilderness due to injury and personal problems to winning the Tour Championship and going close to adding to his 14 major titles in the British Open and the PGA Championship with the Comeback of the Year award.

"There was a long list of people who wrote him off but I was not one of them," said former NFL star Marcus Allen.

"When you are anointed with such talent as he is there is always a way back."

'To have united them'

Mbappe may have missed out on the main individual award but he along with his World Cup winning team-mates collected the team of the year prize.

Manager Didier Deschamps -- who also captained France to the 1998 World Cup triumph -- accepted the award with some members of his backroom staff.

"Being part of the French football team offers one the rare privilege of bringing happiness to the French people," said Deschamps, who won the same award with his Euro 2000 winning team-mates in 2001.

"We are extremely proud to have brought them such joy last summer and to have united them."

Deschamps compatriot Arsene Wenger, credited with revolutionising English football certainly in the early part of his over two decades in charge of Arsenal, received the Lifetime Achievement Award.

The studious 69-year-old Frenchman received his award from one of his former Arsenal stars Cesc Fabregas, who said he had been a father figure to him.

"I would like to thank the wonderful people I met through my career and some less wonderful too," said Wenger.

"Sport is tremendous I had a long career but my passion for sport and for human beings is intact."

China's Xia Boyu's extraordinary achievement in climbing Everest last May, four decades after losing both legs to frostbite in a previous attempt to conquer it, won the Sporting Moment of the Year which is voted on by the public.

Laureus is a global movement that aims to use the power of sport to tackle social challenges in the world.