PARIS, June 3 (Xinhua) -- World No. 1 Novak Djokovic has another record under his name by beating Jan-Lennard Struff in straight sets in men's singles fourth round, while women's singles defending champion Simona Halep faced little challenge to make the quarterfinals here on Monday. 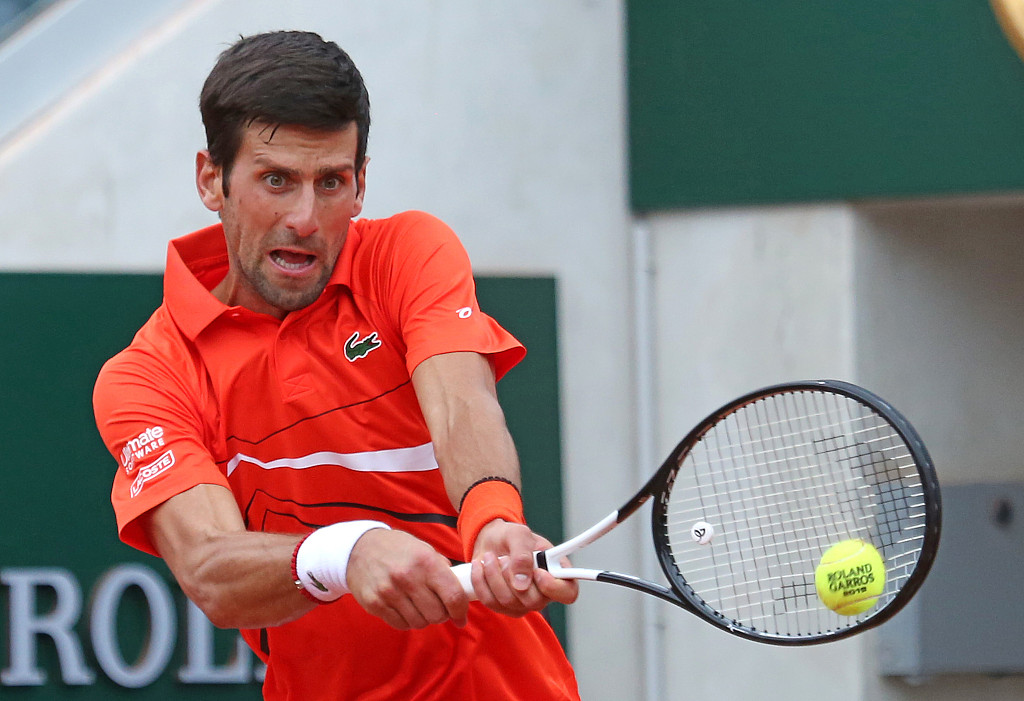 Novak Djokovic of Serbia hits a shot during his French Open men's second round match against Henri Laaksonen of Switzerland at Roland Garros in Paris on May 30, 2019. (Photo: VCG)

Following a 6-3, 6-2, 6-2 victory over Struff, Djokovic became the first man to reach 10 consecutive quarters at the tournament, and his 13th quarterfinal appearance in total.

The top-ranked Serbian outclassed his German opponent with 86% wins on first serve and 31 winners.

"I am satisfied so far with my game. I reached the quarterfinals and played as closest to my best tennis on clay as I think I can be at the moment. I'm really pleased with every aspect of my game," said Djokovic.

"I didn't start well and he did. He played very aggressive, hitting the ball very hard, which made it difficult.

"But then after the first set, I played three very good sets. Very solid from my part," said the promising German player.

The other quarterfinal in the top half will feature last year's finalist Dominic Thiem and 10th-seeded Karen Khachanov.

Unaffected by consecutive exits of prominent names in women's singles, Halep tamed the 18-year-old Iga Swiatek of Poland 6-1, 6-0 in 45 minutes.

Next up for the reigning champion will be another youngster Amanda Anisimova. The 17-year-old American beat Spanish qualifier Aliona Bolsova 6-3, 6-0.

Following their memorable victories in the previous round, over 23-time Grand Slam winner Serena Williams and world No. 1 Naomi Osaka respectively, Sofia Kenin and Katerina Siniakova had to stop their quest for moving on.

Zhang Shuai and Samantha Stosur beat Victoria Azarenka and Ashleigh Barty 4-6, 6-3, 6-2, with their opponents in the 2019 Australian Open final Timea Babos and Kristina Mladenovic waiting in the quarterfinals.