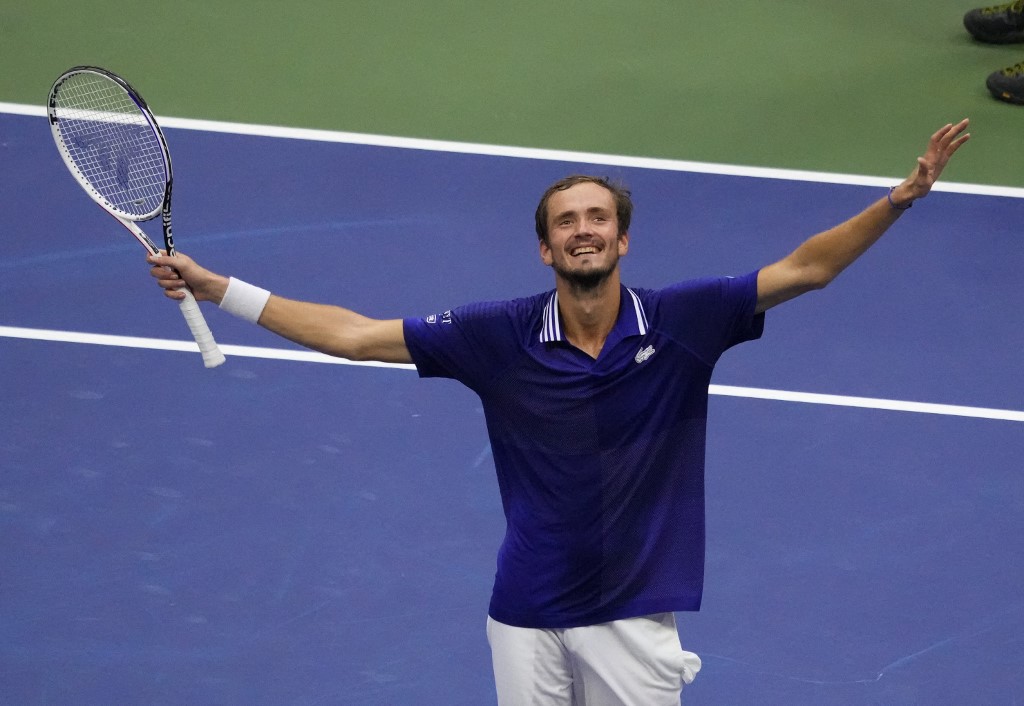 Medvedev, the 2019 US Open runner-up, captured his first Grand Slam title in his third Slam final, a rematch of February's Australian Open final, won in straight sets by the 34-year-old Serbian to launch his Slam quest.

Djokovic's bid to sweep the US, French and Australian Opens and Wimbledon in the same year for the first time since Rod Laver did it 52 years ago collapsed at the last hurdle, with 83-year-old Aussie legend Laver among 23,700 watching at Arthur Ashe Stadium.

Djokovic missed out on his fourth US Open title and will enter 2022 tied with "Big Three" rivals Roger Federer and Rafael Nadal, both absent with injuries, on an all-time record 20 men's Slam titles.

Instead of joining immortals Laver and Don Budge, who completed the first men's Slam in 1938, Djokovic became the third man to fall at the final match attempting to complete the Slam after Australians Jack Crawford in 1933 and Lew Hoad in 1956.

Medvedev, 25, became the third Russian man to win a Grand Slam title after Yevgeny Kafelnikov at the 1996 French Open and 1999 Australian Open and Marat Safin at the 2000 US Open and 2005 Australian Open.

- Struggle from the start -

In the biggest of Djokovic's 1,176 career matches, he made two unforced forehand errors to surrender a break to Medvedev in the first game.

Djokovic saved two break points to hold the third game but Medvedev held through to take the first set in 36 minutes, never facing a break point.

It was the fifth consecutive match in which Djokovic dropped the first set.

Medvedev dropped only three points on his serve in the first set but lost that many to open his first service game in the second.

Djokovic, however, squandered his first three break points of the match and Medvedev held to 1-1.

Medvedev hit a backhand wide to give Djokovic a break chance in the fourth game but he netted a forehand volley then drew back his racquet in anger as if to smash the ball.

After botching a forehand on the folloiwng point, Djokovic shattered his racquet and on the next sent a backhand long as Medvedev held to 2-2, pressure clearly affecting the Serb.

In the fifth game, Djokovic mis-hit a backhand volley to hand Medvedev a break and a 3-2 lead and the Russian held three times to claim the set, Djokovic pushing a backhand wide to surrender the final point.

Medvedev broke again to begin the third set when Djokovic sent a backhand long and again in the third game when a botched volley seemed to signal the end of the Slam chase.

Djokovic held at love in the fifth game but Medvedev held again to 5-1 and served for the match in the eighth game.

Medvedev double faulted on championship point and again, then netted a forehand to surrender a break that kept Djokovic in the match. The crowd cheered his fightback, sensing a momentum swing.

Serving again for the match at 5-4, Medvedev double faulted on his second match point but finally got over the line on his third chance with a service winner after two hours and 16 minutes.