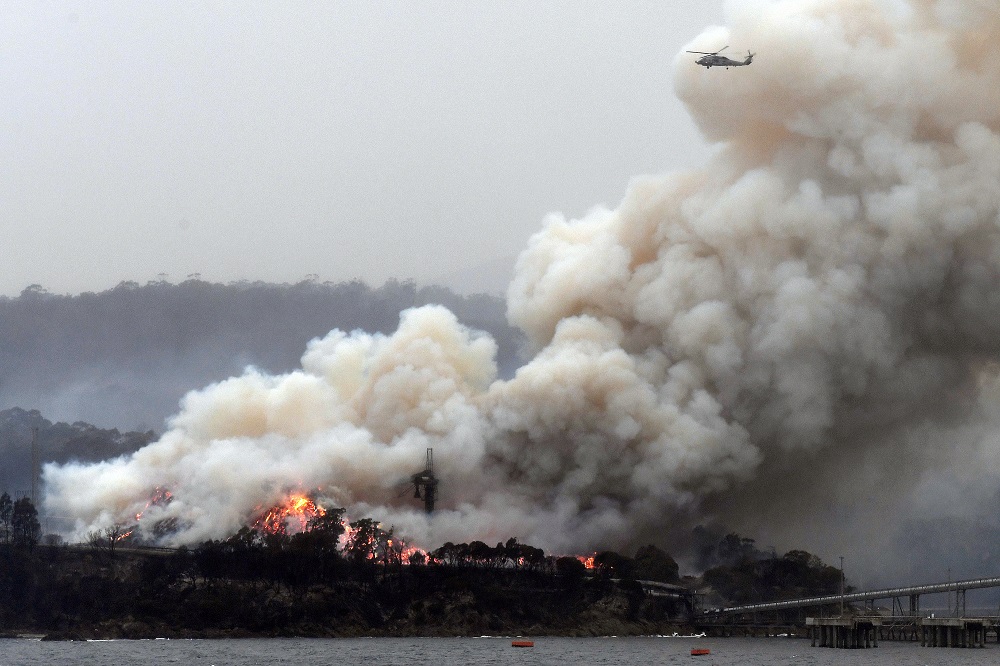 With much of southeastern Australia shrouded by a thick blanket of smoke from bushfires, doctors are warning of severe health problems in the future.

Smoke from the fires, the worst Australia has experienced, is already affecting people's health, especially in Sydney, Melbourne and the national capital Canberra, with pollution levels hitting critical levels.

The poor air quality has become an issue in the lead-up to the Australian Open tennis championships this month in Melbourne, with some players pulling out of the qualifying round due to the pollution.

Several players complained about the conditions, including Australian Bernard Tomic, who sought medical treatment during his first-round loss on Tuesday when he struggled to breathe.

Slovenia's Dalila Jakupovic feared she would pass out before retiring from her match when she collapsed with a coughing fit.

Tennis Australia says it will continue to work with its medical team and scientists from the Bureau of Meteorology and Environment Protection Authority Victoria when making decisions about whether it is safe to play.

Doctors warn that even healthy people could develop serious illnesses, because of the smoke haze.

In a statement on Jan 3, Tony Bartone, president of the Australian Medical Association, or AMA, described the length and density of smoke exposure as "a new, and possibly fatal, health risk" most Australians have never faced before.

"With denser smoke haze and longer periods that people endure smoke inhalation, there is a much higher risk that previously healthy people will face … serious illness," Bartone said.

Australia's bushfires, which began in September last year, have killed at least 27 people, destroyed or damaged more than 2,000 homes, and led to emergency declarations in New South Wales and Victoria states.

Chris Zappala, AMA vice-president and respiratory physician, said the longer people were exposed to air pollution, the more likely they were to develop respiratory problems.

"Ordinarily, patients can handle a few days or a week of smoke particulates in the air... but this exposure is going on at reasonably high levels for a lot longer," Zappala said.

Bushfire smoke irritates the respiratory system and contains fine particles that can travel deep into the lungs, causing damage.

"These particles cause inflammation and get inhaled very deep into the lungs, causing the lung to become inflamed. This is a big problem for people with respiratory conditions. They also can cross over from the lung into the bloodstream and cause inflammation in areas such as the heart," he said.

Clare Murphy, professor at the School of Earth, Atmospheric and Life Sciences at the University of Wollongong, south of Sydney, said the sheer numbers of people who have been exposed to very high levels of smoke pollution over extended periods in the bushfire crisis is unprecedented.

"In addition to the fine particles that are damaging to human health, smoke from bushfires contains significant amounts of different gases that are also toxic (such as carbon monoxide, formaldehyde, acrolein and hydrogen cyanide)," she said.

"These additional airborne toxins are not measured at air quality monitoring stations (as they would usually be below the detection limits of available instruments), but nevertheless will impact on the health of those breathing the smoke."