Doctors in a hospital, RSUD Mataram, ran by Indonesia's West Nusa Tenggara (NTB) provincial government, are work around the clock to serve those injured from the quake-hit areas across the leisure island of Lombok. 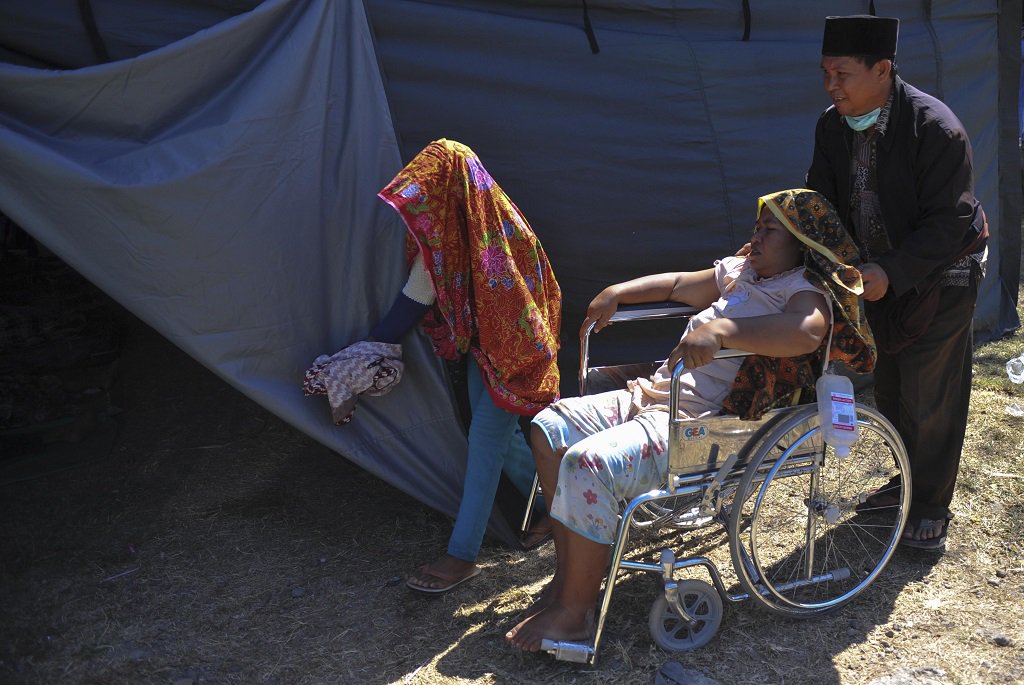 They pertinently treat patients who are now placed in tents set up in the hospital's parking lot and the backyard as the hospital's multi-floor building was significantly affected by the 7-magnitude earthquake which struck on Sunday. 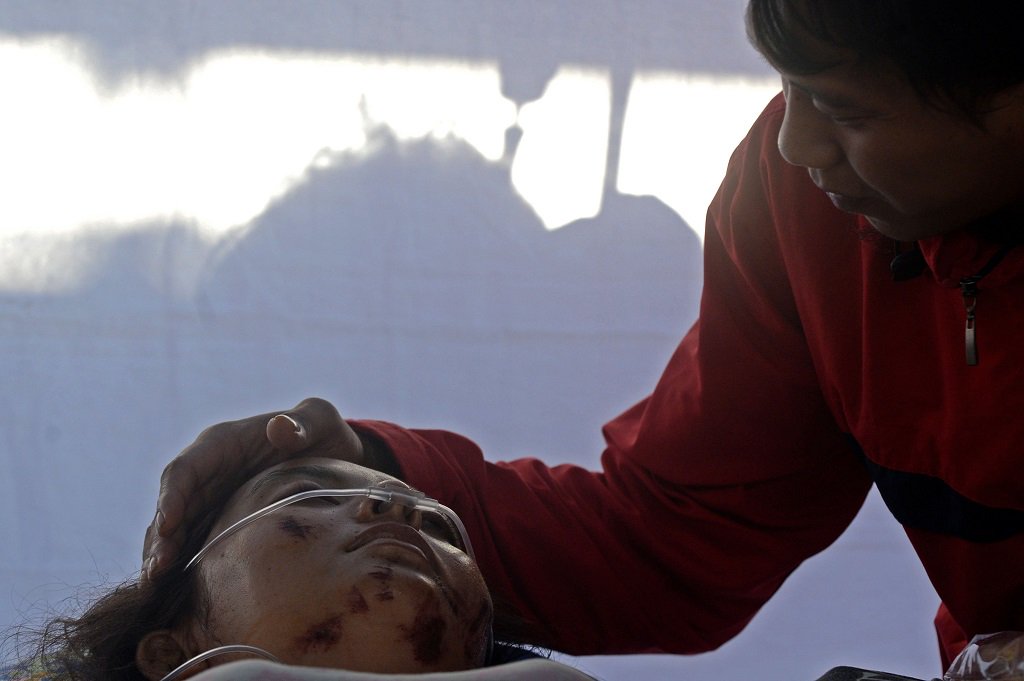 Cracks are seen in most parts of the hospital walls that are likely to collapse if there will be another earthquake occurring in the island.

The hospital senior staff said that the management board decided to take all the patients out of their wards and place them outside the hospital buildings shortly after the strong earthquake jolted the premises for the safety of both the doctors and patients.
Medical instruments for surgeries have also been moved out of the hospital and the intensive care unit (ICU) with life-supporting devices for the patients having serious injuries has also been set up in a tent in the parking lot.
"This facility is enough to handle patients suffering from fractures and related wounds from the earthquake. We have just operated on a patient with fracture in his leg due to the earthquake," Head of RSUD Mataram Service Management Emiral Isfahan told Xinhua in the hospital on Tuesday.
Due to the emergency situation, he said that the hospital could not provide advanced medical service that requires high technology equipment as the instruments set up in the hospital yard are the portable ones. 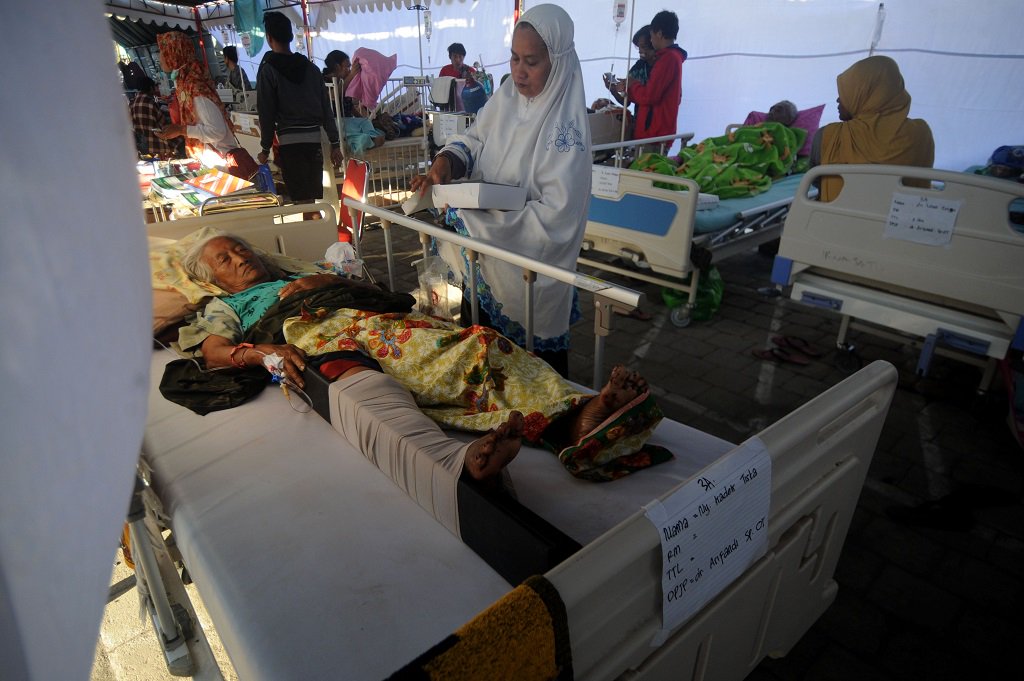 Our advanced technology instruments are still inside the building. It is not easy for us to move them out as they were installed while the buildings were under construction. For those who need to get served by those equipment, we recommend them to go to other hospitals that have the similar equipment," he added.

The tent quality is another issue faced by the hospital as it is barely qualified to carry out certain medical services for particular patients.
"Now the only thing we can do is to maximize its function and making it good enough to support our medical activities. We are still communicating with other related institutions due to the tent quality problem," he said.
The current emergency situation has also forced the hospital to reorganize its working shifts for all the human resources working in the hospital.
He said that all the doctors working in the hospital have been told to be on standby 24 hours, with working shift schedules around the clock set to serve the injured from the earthquake.
"We have reorganized the working shifts to four around the clock. Doctors who are off duty are also told to respond quickly when they are called to handle particular situation here," Emiral said, adding that the number of hospital's doctors stand at around 1,000 at present.
The shift reorganization includes the deployment of doctors by the health ministry to serve in the quake-hit province, he added.
Patients with bandages in the head and legs are seen lying in the beds in large tents and some of them are accompanied by their families. Some of them seem hardly able to withstand the pain from the wounds they suffer.
Patients with lighter injures are allocated to semi opened tents, while those who need more intensive medical care are placed in the large and closed tents.
Among the patients in recovery period is Mala, a 37-year-old female who gave birth at the time when the strong earthquake took place.
She said the earthquake occurred when the doctors were about to start the caesarean procedure on her.
"I was evacuated from the operation room with the whole supporting equipment attached to my body. The doctors were not panic to respond to the earthquake. They kept calm to do the operation amid the aftershocks," she recalled the unique birth experience of her second child.
The doctors applied local anesthesia procedure on her stomach that made her still aware of the developing situation around her.
During the aftershocks, she said the doctors continued to console her and kept watching around the tents to anticipate possible worse situation that could happen at that time.
"The operation ran smoothy and I was entirely safe," she said happily.
She planned to go back to her house located in East Lombok within the next few days. She added that her house is among the ones that are not affected by the earthquake
Indonesian Health Minister Nila Moeloek has said in different occasions that hospitals in the province have conducted operations for 135 persons who suffered fracture and injuries in the earthquake.
The health ministry has sent 60 orthopedics and 78 specialist doctors to hospitals in Lombok following the Sunday's earthquake, she added.