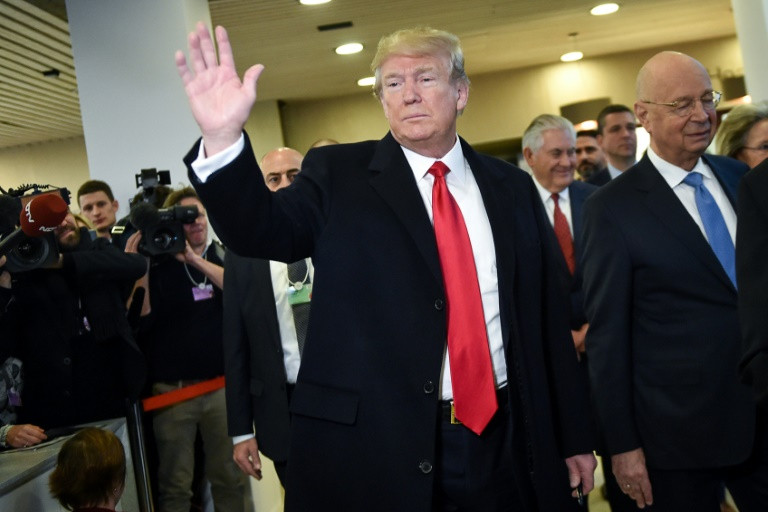 President Donald Trump on Friday reached out to the global business elite and foreign governments in Davos with a sales pitch extolling America's appeal, but attracted boos for attacking the media.

In a 15-minute speech at the climax of his debut appearance at the World Economic Forum in the Swiss Alps, Trump offered "America's friendship and partnership" in both trade and security, and said: "'America First' does not mean America alone."

"The world is experiencing the resurgence of a strong and prosperous America. America is open for business and we are competitive once again," he said.

Trump kept to an orthodox political script and measured tone in his speech, during which he praised his well-heeled audience of 1,500 people as comprising some of the world's most "remarkable citizens".

He added that the United States supports free trade, "but it needs to be fair and it needs to be reciprocal", condemning "predatory behaviours" such as theft of intellectual property, industrial subsidies and state-led economic planning.

The president's speech came at the end of a week that saw his administration target China and South Korea with new tariffs, and experience turmoil in currency markets caused by his Treasury secretary apparently tolerating a weaker dollar.

His remarks on trade were met in silence by the Davos audience, after Trump took office on an "America First" platform following years of US job losses to cheaper countries.

But they booed when he strayed off script during a brief question session after the speech with an attack on the "nasty", "mean", "vicious" and "fake" press.

Trump has reconciled the Davos-bashing that characterised his unorthodox march to the White House with the need to sell America to the world, and the speech gave him the opportunity to try to shift the dial away from the latest unfavourable headlines back home.

The president awoke to a New York Times story that he had ordered the firing of Russia investigation special prosecutor Robert Mueller last year, but had to back off when the White House counsel threatened to resign.

The president did use a British television interview recorded in Davos to strike a rare note of contrition on another controversy.

After last year retweeting a British far-right group's videos apparently showing Islamist violence, Trump said in the interview broadcast Friday: "If you're telling me they're horrible racist people, I would certainly apologise if you'd like me to do that."

The charge that Trump is racist earned new traction this month with his reported slur against "shithole" countries in Africa.

Before his speech in Davos, he held talks with Rwandan President Paul Kagame, who currently chairs the African Union. Trump asked Kagame to pass on his "warmest regards" to other regional leaders at an AU summit this weekend.

But some business chiefs and activists from Africa said they planned to boycott Trump's closing speech in Davos.

"Trump is just one of a kind, a member of the elite who has chosen to serve the interests of a few at the top, at the expense of ordinary people," the Ugandan added.

Trump's presence in Switzerland has been dogged by protests and stunts by activists. But the president said there was "a tremendous crowd" to meet him at the summit -- raising memories of the controversy a year ago when he claimed record numbers had attended his presidential inauguration in the face of all evidence.

"It's a crowd like they've never had before at Davos," said Trump, who has never before attended the forum.

A year ago, the Davos spotlight was claimed by China's communist leader Xi Jinping, who took up the torch of global trade to the delight of a crowd then anxious about Trump's impending inauguration that week.

And there were low expectations among many in the Davos elite heading in to Trump's speech, after he had berated the rest of the world at the UN General Assembly last September.

"It was not at all what you expect from Donald Trump, who sometimes makes very wild statements," he said.