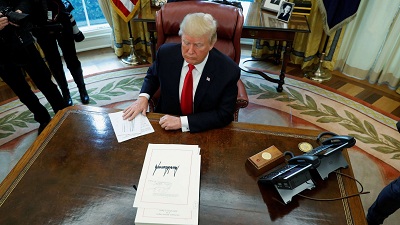 The bill, the biggest overhaul of the US tax system in the past 30 years, was passed by congress on December 20. It was considered to be Trump's first major legislative victory.

The bill slashes the rate of tax for corporations from 35 percent to 21 percent. Individual Americans can also enjoy the tax cut, but the lower rate expires after 10 years.

It was previously reported that Trump would sign the bill in January in order to avoid automatic cuts to Medicare and other programs in 2018 under the Pay as You Go Act. Congress added language on December 21 to prevent the cuts if Trump signed the tax bill before 2018.