Hurricane Dorian powered toward Florida with increasing fury Friday, becoming an “extremely dangerous” Category 4 storm but leaving forecasters uncertain whether it would make a direct hit on the state’s east coast or inflict a glancing blow. 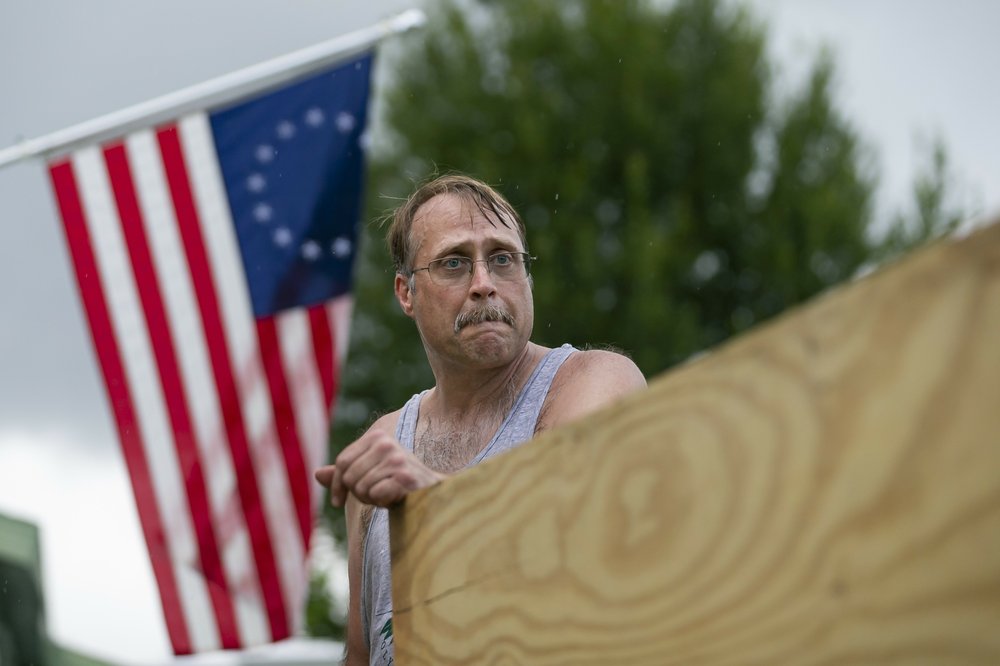 Colin Johnson holds back tears as he prepares to board a window at his father's home in preparation for Hurricane Dorian, Friday, Aug. 30, 2019, in Vero Beach, Fla. Johnson's father, Larry, unexpectedly died Thursday. (Photo: AP)

The storm’s winds rose to a howling 130 mph (215 kph) as Dorian gained new strength while crossing warm Atlantic waters. The hurricane could wallop the state with even higher winds and torrential rains late Monday or early Tuesday, with millions of people in the crosshairs, along with Walt Disney World and President Donald Trump’s Mar-a-Lago resort.

Though Dorian is growing in intensity, some of the more reliable computer models predicted a late turn northward that would have Dorian hug the coast, the National Hurricane Center said.

The faint hope came on a day in which Dorian seemed to get scarier with each forecast update. And there were fears it could prove to be the most powerful hurricane to hit Florida’s east coast in nearly 30 years.

Late Friday, the National Hurricane Center’s projected new track showed Dorian hitting near Fort Pierce, some 70 miles (115 kilometers) north of Mar-a-Lago, then running along the coastline as it moved north. But forecasters cautioned that the storm’s track was still highly uncertain and even a small deviation could put Dorian offshore or well inland.

Trump declared a state of emergency in Florida and authorized the Federal Emergency Management Agency to coordinate disaster-relief efforts. He told reporters that “Mar-a-Lago can handle itself” and is more worried about Florida.

“This is big and is growing, and it still has some time to get worse,” Julio Vasquez said at a Miami fast-food joint next to a gas station that had run out of fuel. “No one knows what can really happen. This is serious.”

As Dorian closed in, it upended people’s Labor Day weekend plans. Major airlines began allowing travelers to change their reservations without a fee. The big cruise lines began rerouting their ships. Disney World and the other resorts in Orlando found themselves in the storm’s projected path.