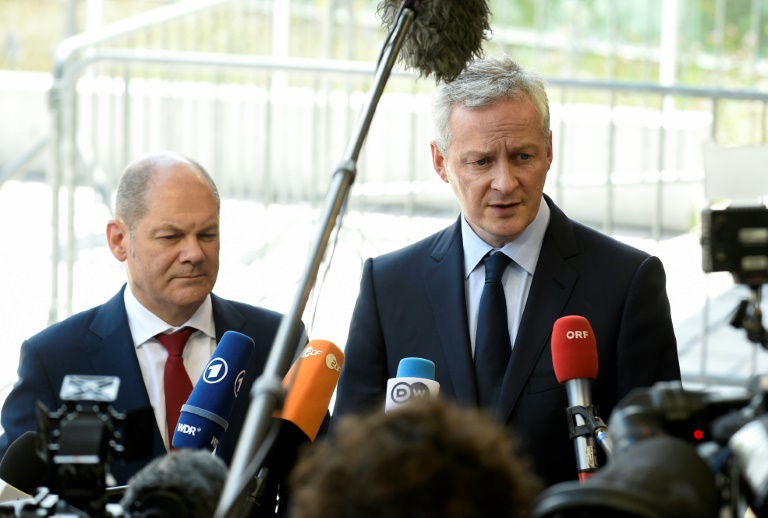 Opposition emerged Thursday to a Franco-German plan to create a special eurozone budget, with fears that the idea was unnecessary and could create a "two-speed" Europe.

At a meeting in Luxembourg, European Union finance ministers were set to discuss a raft of proposals on how to improve the euro single currency in preparation for an EU leaders' summit on the topic next week.

Ahead of that full summit, German Chancellor Angela Merkel and French President Emmanuel Macron on Tuesday agreed to a raft of reform ideas to be jointly tabled by the two nations that traditionally drive EU policy.

Macron has made the idea of a crisis-fighting budget for the 19-member single currency bloc a signature part of his plans to jump-start the EU after the debt crisis and the shock of Brexit.

"For the first time France and Germany have agreed to have a eurozone budget," said French Finance Minister Bruno Le Maire as he arrived for the talks.

"It is not a take-it-or-leave-it road map, it's a good starting point," said Le Maire, who called the budget proposal "historic".

The idea of a joint budget, which Merkel initially resisted, is part of an effort to bring about economic convergence in the eurozone.

The absence of such convergence in the single currency area in the past has been seen as one of the root causes behind the debt crisis in Greece, Spain and Ireland.

But EU founding member the Netherlands on Thursday poured cold water on the idea.

"In terms of fiscal capacity or eurozone budget... the question really is what type of problem is that solving? That is unclear to us. And we are not in favour of it," said Dutch Finance Minister Wopke Hoekstra ahead of the talks.

Non-euro powerhouse Poland also cast serious doubts on the Franco-German proposal, even if the plan remains vague for now.

Krzysztof Szczerski, chief of staff to Poland's President Andrzej Duda, said eurozone members would choose their own countries "at the expense" of the EU budget that largely helps eastern European nations.

"That would be the end of the EU," Szczerski told the Polish PAP news agency.

Ministers in Luxembourg will also discuss other reforms targeted by Berlin and Paris, including expanding the remit of the European Stability Mechanism ESM) -- the firefighter for eurozone countries with serious debt problems.

Plans to harmonise corporate taxes in the bloc and introduce a digital tax by the end of 2018 are also on the table.